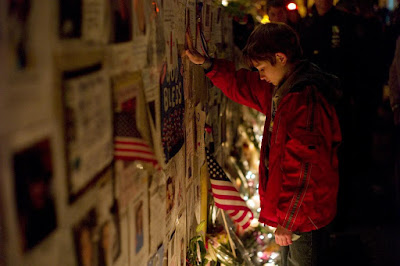 I honestly do not know what to make of Extremely Loud & Incredibly Close. It has moments that are so powerful that the film approaches greatness, yet many other scenes are so patently manipulative and overblown that it veers into War Horse-grade sap. This is a frustrating and thought-provoking film, but not necessarily in the good way. 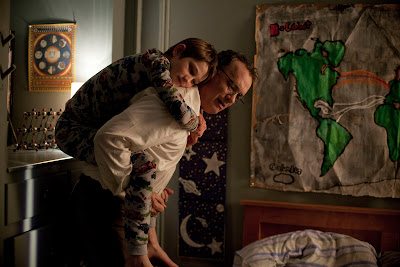 Part of the problem potentially arises through the difficult task of translating national trauma to a global audience. Extremely Loud & Incredibly Close is a tale of 9/11, but its treasure-hunt motif portrays the attack on the Twin Towers as everybody’s tragedy, something all moviegoers can shed a tear over regardless of whether they hail from New York. The attempt at universality likely succeeds in engaging viewers, for many moviegoers will surely find themselves choked up over the story of young Oskar Schell (Thomas Horn), who tries to accept the fact that his father, Thomas (Tom Hanks), died on 9/11 or what Oskar simply refers to as “the Worst Day.” Other moviegoers, however, might object to the eclectic deceitfulness with which Daldry et all trivialize the Worst Day. 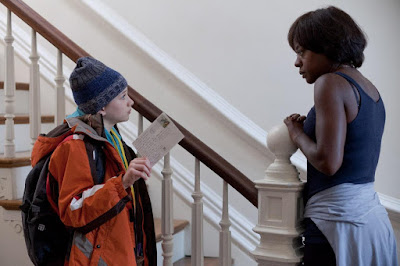 As Oskar seeks to discover the mystery of his father’s absence, Extremely Loud & Incredibly Close propels its young protagonist on a whimsical wild goose chase through the streets of New York. Oskar aims to find a lock to fit a mysterious key that was hidden in his father’s closet. The only clue is the name Black, which remains etched on the envelope that contains the key. A lover of the quirky treasure hunts shared with his father, Oskar his Thomas’s memory by creating his own elaborate (if implausible) quest to find the owner of that key.

The basic premise of the film only hints at the endless series of convolutions that continually work against the overall power of the film. Part of Oskar’s task to uncover his father’s mystery is to acknowledge what happened on the Worst Day. On 9/11, Thomas left several messages on the telephone, which Oskar keeps hidden in his closet, refusing to share them with his mother, Linda, (Sandra Bullock) and listening to them repeatedly. One of the stronger lessons of Extremely Loud is this need to express the unsaid, a morale that is well accentuated through a subplot involving the Schells’ neighbour (Max von Sydow) who is mute by choice. As the renter helps Oskar overcome his fear, his rapport with Oskar offers some of the film’s finer moments, despite the predictable arc of their relationship. 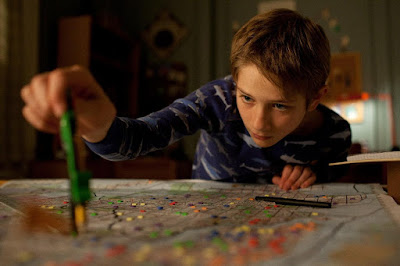 The task of watching such a young child face the horror of confronting his father’s death should be genuinely affecting, but it grates on the nerves instead. An amateur inventor, Francophile, and pacifist (as his card states), Oskar is an eccentric young man. A bit too bizarre, one might say. Linda even goes so far as to state that she had Oskar tested for behavioural disorders. Oskar does not have Asperger’s or such; rather, he is simply annoying. He fills Extremely Loud & Incredibly Close with odd systems and games, offering peculiar little facts or rote recitals of number patterns as he walks through Manhattan with his tambourine, which jangles annoyingly with every step. It all feels a little inappropriate, though, when Oskar starts listing off 9/11 related number sequences or when he turns the tragedy into a form of child’s play.

Add to the irks and quirks of the character some equally overwrought efforts by Daldry et al, and Extremely Loud becomes more agitating than cathartic. The first offender is the hyperkinetic editing job by Claire Simpson (an odd misfire on her part), which aggravates endless through its rapid-fire expression of Thomas’s odd mind. Similarly, the sound designers overwhelm the film with sirens and buzzy noises to express the sense of chaos generated on the Worst Day, but rather than communicate Thomas’s fear effectively, the grandiloquence of the film is distracting and pedestrian. Moreover, it drowns out the award-calibre score by Alexandre Desplat, which offers the film’s most effective enhancement, creating emotional cues that are genuinely moving, as opposed to the rest of the film, which feels extremely forced. Conversely, the cinematography by Chris Menges is clean and crisp, if a tad uninspired. Lastly, Daldry’s use of horrifying images of 9/11 is flawed at best. The film employs familiar icons of the event as motifs, such as the reams of papers blustering in the air following the collapse of the towers. Worst, though, is the recurrent image of Tom Hanks plummeting through the air in free fall as Oskar pictures his father sailing from the tower to the ground. Such things are best left to the imagination. 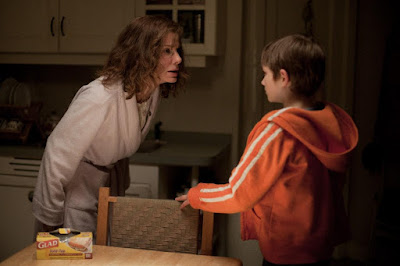 The film also succumbs to the fatal error of forcing so much of the dramatic weight to rest upon the skills of such a young actor. Thomas Horn wowed audiences with his big win during Kids Week on Jeopardy!, but his inexperience shows despite his best efforts. Moreover, Daldry stacks the ensemble with heavyweight talents, and their superior skills have the adverse effect on the young star. (It’s like the opposite of seeing co-stars outacted in every frame of a film starring the great Meryl Streep.) Sandra Bullock is extremely effective as Linda: the scene where she pleads for Thomas to stay on the phone while trapped in the tower evokes the power of Paul Greengrass’s 9/11 film United 93. Likewise, The Help’s Viola Davis is quite good as the first Mrs. Black that Oskar meets during his search. Some of the other faces Oskar encounters veer the film into camp, though, offering New Yorkers as irksome as he.

Based on the novel of the same name by Jonathan Safran Foer, Extremely Loud & Incredibly Close might be one of the cases in which whimsy and eccentricity reads great in prose, but self-destructs onscreen. I have the book, but didn’t have a chance to read it before seeing the film. There is enough power in the film to encourage me to read it nevertheless, although the strength of the novel may fuel my ire over Daldry’s mishandling of the material.

Extremely Loud & Incredibly Close is currently playing at the AMC Yonge/Dundas in Toronto.
It opens in wide release January 20th.