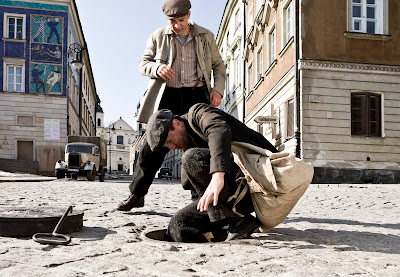 A dramatization of the Holocaust, In Darkness treads a very fine line between powerful and cliché. The film, which tells the true story of a Polish man named Leopold Socha (played by Robert Wieckiewicz, in a strong performance) who saved a dozen Jews by hiding them in the city sewers, is both surprising and familiar. Many of the characters living outside the sewer walls are stock characters and much of the dialogue seems ripped from the handbook Holocaust Films 101 by Ricky Gervais, yet In Darkness redeems much of its potency through the reality attributed to the events. If these events actually happened, they are hardly cliché. 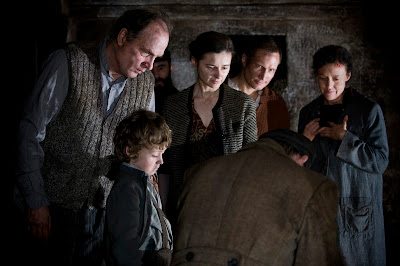 Moreover, director Agnieszka Holland does a phenomenal job of dramatizing the story within the claustrophobic confines of the sewer walls. Featuring some of the best cinematography I’ve seen all year (by Jolanta Dylewska), In Darkness offers some masterful compositions of light and shadow. The overlength of In Darkness mars its power a little, as does an odd overdose of sexual content (it seems that the sewers are the number one spot for 'getting dirty'), but this is nevertheless a dirty, gritty, and baldly realistic portrait of survival.
In Darkness, a co-production between Poland, Canada, and Germany, is Poland’s official entry for Best Foreign Language Film at the Oscars. It is certainly worthy of being deemed among the top five and of receiving the exposure that the title brings. I wouldn’t bet on In Darkness to take the top prize, however, because I still think that A Separation has this one in the bag.