Not Quite as Scary as W.E. 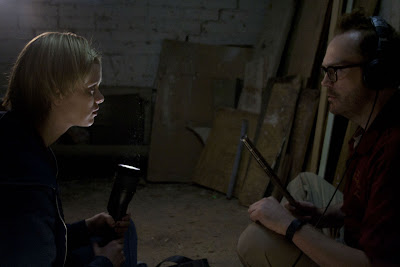 “Boo!” say ghosts in generic old movies or comics. “Boo!” groans an audience when an original, surprising movie veers into convention. “Boo!” I cry at The Innkeepers for having me breathless one moment and rolling my eyes the next. 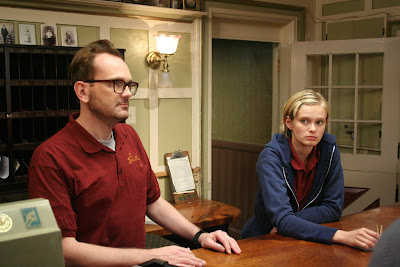 A sleeper hit with the late night crowd on the festival circuit, The Innkeepers might prove worthwhile for diehard horror fans. It’s a spooky tale of Claire and Luke (Sara Paxton and Pat Healy), two desk clerks at an old inn in a small town. The inn is in its last weekend of business, and Claire and Luke have been commissioned to man the fort alone and satisfy the few remaining guests before the hotel shuts its doors for good. Aside from a bitchy mom and her little boy, the inn is rather vacant. (Hence why it’s going out of business.) Claire and Luke find themselves with oodles of time on their hands, and decide to get through the weekend by indulging in one of Luke’s interests: documenting the spirits that allegedly haunt the inn.
Legend says that a woman named Madeline O’Malley died at the inn during her honeymoon many years back. They say her spirit remains in the inn to torment the guests and do unfinished business. Luke has uploaded some video footage of Madeline’s haunts onto his website, which rattles Claire and piques her interest. Claire raises her spirits even higher when a celebrity guest (played by Kelly McGillis) checks into the hotel. An actress, Leanne Rease-Jones tells Claire that she is in town for a conference. After things start to go bump in the night, though, Leanne reveals to Claire that she is now a practising medium. She offers to help Claire communicate with Madeline O’Malley via a glass prism. The scene is hardly as thrilling or spectacular as the paranormal communiqué in say, Insidious, yet The Innkeepers chills through its sparse minimalism, nerve-wracking pace, and emphasis on character. 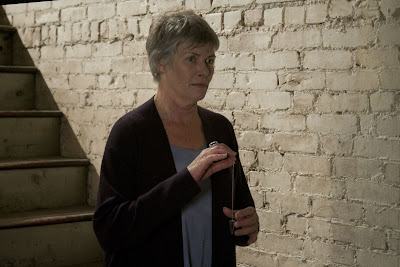 During the pseudo-séance, however, a visibly shaken Leanne implores Claire not to go into the basement. Naturally, Claire follows the logic of all the horror movie blondes that have gone before her and heads straight to the basement. She even goes there alone.
The Innkeepers delivers some genuine thrills when it breaks from convention, but too frequently does it veer back into cliché. At times, the formula resembles parody, but the jokes are a bit timid, thus generating awkwardness instead of comic relief. The film also employs the instructive string score that is the standard of horror pictures, signalling most chills a good thirty seconds before the action appears onscreen. The music undercuts the scares as often as the muddled humour does. It’s disappointing that The Innkeepers rarely adds up, especially since the first few chapters seem to be building something great.
If horror fans embrace the crappy visual effects and enjoy the tongue-in-cheek gags, The Innkeepers might prove to be as fun as a round of Ghost in the Graveyard. The Innkeepers doesn’t do anything new with the haunted house film, so moviegoers might best become tenants of another screening room. Anyone looking for a genuine scare, though, should probably just go see W.E.
Rating: ★★½ (out of ★★★★★)
The Innkeepers is currently playing at TIFF Bell Lightbox in Toronto.
Posted by Pat Mullen at 2/07/2012 09:54:00 AM