Last night I joined some friends to see Pam Grier in a special conversation for Black History Month. The event, part of TD’s ‘Then and Now’ series and presented by TD, The Canadian Film Centre, and Clément Virgo, was moderated by actor/director Sharon Lewis (Rude). ‘An Evening with Pam Grier’ was a fun night overall and it drew a good crowd. The night began with Miss Grier offering a fun anecdote of raising horses on her farm in Colorado, describing a time when Snoop Dogg and Xzibit came out to the boonies and got more than they expected. (It turns out that Miss Grier is quite charitable with her horses and she gives riding opportunities to local students.) What this all led to was a good morale for finding respect and confidence, and that treating others kindly and humanely is an essential step for making something of yourself in the world.
The story provided a good segue for Miss Lewis to bring the discussion to Coffy, the film that proved to be Grier’s breakout film. As Grier described how she and her peers established a strong presence for African Americans in the cinema, I was impressed by her candidness. Not having planned to become an actress (she went to school planning to work behind the camera), Grier said that she used her own experience as a victim of rape and abuse to inject the proper emotion and ferocity into her characters. It worked, and as the consistent rounds of applause showed, Grier’s strong female action heroes provided a much needed dose of honesty to the cinema.
The talk also hit on some interesting aspects of the lack of opportunity in the industry at the time of films like Coffy and Foxy Brown, but Grier spoke of it with excitement, rather than bitterness or resentment. “It’s just a business,” she said before describing how her first stunt double was actually a white man in black makeup. Grier also described how she was offered a chance to pitch a project at the height of her stardom and tried to sell a film about Mary Fields, the first African American stagecoach driver, but the project was dismissed because an executive didn’t think audiences would believe the story was true. 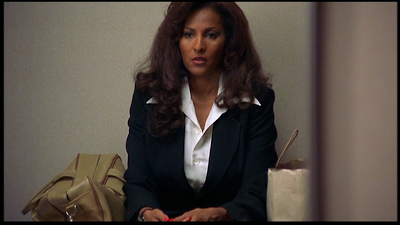 Grier also spoke a little about meeting Quentin Tarantino and working on Jackie Brown. I was especially excited for this part, as Grier’s performance in Jackie Brown is not only my personal favourite of hers, but one of my all-time favourite performances by an actor.  This performance almost didn’t happen though because when the time came for Tarantino to mail the script, Grier said that Tarantino was short forty-four cents on the delivery, and she almost didn’t go to the post office and pay the fees, assuming the mystery package was just junk.
It was also exciting to hear Pam talk a little about her book, which, as she and Lewis said, is soon to become a movie of her life story. I wonder who will play her? Miss Grier praised Paula Patton and Zoe Saldana a few times during the evening, so my money’s on one of them.
*Sorry for the lack of pictures. I took a few but the lighting was too dark and they didn’t turn out.
Posted by Pat Mullen at 2/03/2012 11:25:00 AM