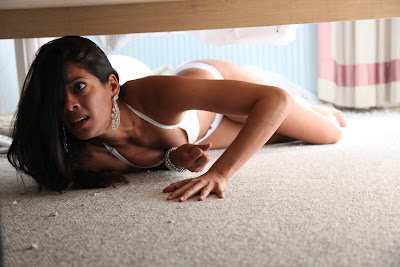 Beauty pageants and machine guns, that’s rojo caliente. Well, one would think so. Much of Miss Bala is hot and spicy, but this Mexican thriller (co-produced by actors Diego Luna and Gael Garcia Bernal) serves a bit too much mild salsa for my palette. Tonally uneven and poorly paced, Miss Bala offers some goods, but it hardly delivers its full potential. 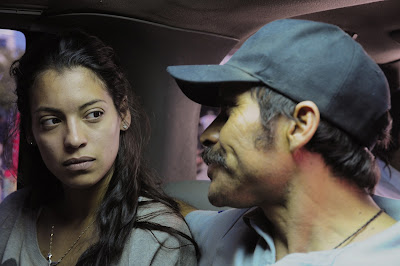 Stephanie Sigman stars as Laura Guerrero, and she gives one hell of a performance as a young Mexican girl who enters a pageant to become Miss Baja California, but gets far more than she expected. Laura and her friend and co-competitor do a little late night partying the night before rehearsals commence. Some drug land guerrillas decide to crash the party, too, and wipe out fourteen people – civilians and police officers alike – in a mass execution. Laura runs into one of the gunmen before the shooting, however, and her pretty looks receive the sympathy of the gunman and he gives her a head start before he opens fire.
Laura escapes but her friend does not. Understandably worried, Laura forgoes the beauty pageant to look for her friend. She finds a police officer and asks for help, but the patrolman is on the take from the drug cartel and delivers Laura to the drug lords so that they can do what they please with the only witness to the massacre.
Laura then becomes an unwitting accomplice in their organization. Her forced involvement begins by driving and parking a car, and it goes as far as acting as a money mule. In return, the bad guys rig the beauty pageant and get Laura a prime spot, despite her haggard appearance and edgy demeanour. 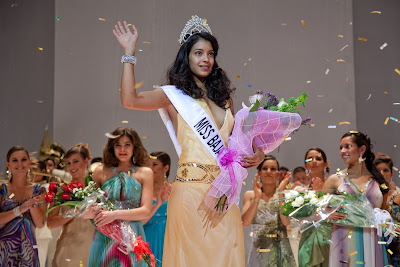 Miss Bala offers a convincing story and provides a harsh, realistic, and provocative portrait of the Mexican crime world. Director/co-writer Gerardo Naranjo delivers some riveting sequences and orchestrates at least one sensational and explosive action sequence, but the film drags once too often. In between shootouts, Miss Bala observes the workings of the cartel, but the trip to the underworld is depicted a bit too literally with some car rides and conversations drawn out painfully long. The final act is of the film expendable, save for the strong ambiguous ending, which might have been more interrogative had the film ended twenty minutes earlier.
Miss Bala is worth seeing for those intrigued by the behind-the-camera participation of Diego Luna and Gael Garcia Bernal. Much of the film suggests they’ll go on to better things. Miss Bala is also worth the time for those keeping up on the Oscar race in the Best Foreign Language Film category, as the film – Mexico’s official entry – made it to the final round of voting but just missed the cut for a nomination. Miss Bala, which caused such a stir on the fall festival circuit, might disappoint some viewers, but Sigman’s performance surely provides the powder keg early word made the film out to be.
Rating: ★★★ (out of ★★★★★)
Miss Bala is currently playing at the AMC Yonge & Dundas in Toronto.
It is coming soon to the ByTowne in Ottawa.
Photos by Eniac Martinez. Courtesy of Mongrel Media.
Posted by Pat Mullen at 2/05/2012 06:10:00 PM