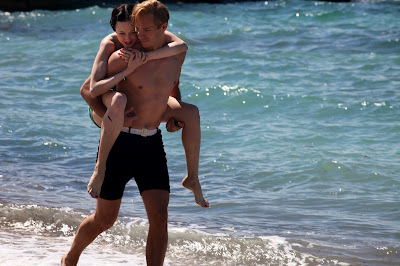 “Off with her head!” The latest film from writer/director Madonna is a true abomination to the legacy of British heritage films. It’s a stylish affair to be sure, and a pretty thing to look at, but W.E. is as dull and lifeless as a performance by her Madgesty herself. W.E. kind of plays like a sexed-up version of The King’s Speech, yet one might have a better time watching wallpaper for two hours than this latest directorial effort. Such a comment seems unfair, though, since Madonna is arguably a better director than she is an actress. 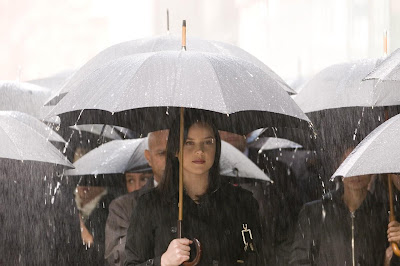 If you’ve seen Madge in action, though, you know this compliment is a little backhanded. The problem with W.E. is that one sees Madonna’s inexperience painted all over the film, which probably had much potential given the sudden craze in interest for the monarchy after the Royal Wedding and The King’s Speech. W.E. explores a story that The King’s Speech only discusses briefly, namely the love affair between King Edward VIII (James D’Arcy) and American socialite/divorcée Wallis Simpson (Andrea Riseborough). Together, Wallis and Edward make W.E. (pronounced “we” as several characters make a point of stating), an indelible and inspiring union of true love.
Ha.
Their love affair inspires a modern-day incarnation of Wallis Simpson, the cleverly named Wally Winthrope (played by a surprisingly flat Abbie Cornish). Wally is named for the woman for whom Edward abdicated the throne, and she is strangely obsessed with Wallis. Wally sees herself as an equivalent to the misunderstood little rich girl. Like Wallis, Wally is in exile. Her exile is symbolic, though, and a result of her distant, detached, and philandering husband. 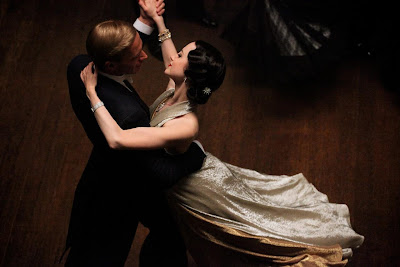 Madonna unfolds the film in Julie & Julia style, crosscutting between past and present, and showing the life of one woman that inspired another. Wally evens spends her days fascinating upon the remains of Wallis’s life, even going so far as to drop $10 000 on a pair of used gloves. (I hope they fit.) Luckily for Wally, Sotheby’s is currently holding an exhibit/auction of W.E. memorabilia, and the bored little rich girl escapes her suffocating existence by trolling through the magnificent artifacts like a flaneuse. One could therefore see W.E. as a botched attempt to amalgamate Julie & Julia and Cleo from 5 to 7. (Maybe Madonna wasn’t lying at the Golden Globes after all when she said how much she likes to watch foreign films.)
W.E.  becomes a Madonna misfire, however, because the director displays no logic of restraint. The visual scheme of the film is an odd pastiche of stylistic flairs of other directors. Rather than build off the ideas of her mentors, Madonna cries “I want it all,” and throws in everything but the kitchen sink. The result is an assault on continuity and good taste. 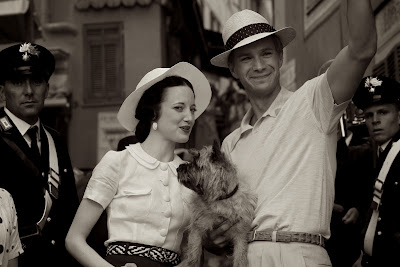 The camera disorients in a series of whirlybird gimmicks and unnecessary movements. W.E. also alternates film stock and colour, senselessly offering a grainy black and white shot here and there for no apparent reason. Madonna offers some bizarre cutaways (she’s fond of close-ups on eyes) and she also displays ignorance to typical conventions of staging and editing, or she otherwise delves too far into art-for-art’s sake defiance. Editor Danny Tull should carry much of the burden, though, for the hack job he does on W.E. is the only element more fatal than Madonna’s atrocious and cliché-ridden script.
There is still much to admire in W.E. The costumes by Arianne Phillips deserve their Oscar nomination, and the score by Abel Korzeniowski is frequently good, although the busy visuals often make his chords sound a bit grating, rather than offer the hypnotic effect of A Single Man. Best of W.E., however, is Andrea Riseborough’s performance as the young Wallis Simpson. Riseborough (Made in Dagenham, Never Let Me Go) is so good that she could have won an Oscar had she played this part in The King’s Speech. She didn’t, though, and the full-bodied depth of her performance gets sunk with the rest of this misfire. The actress should nevertheless be commended, though, for it’s simply astonishing that someone could achieve a performance this good after receiving direction from Madonna.
Madonna seems to share a special affinity with Wallis Simpson, so perhaps that explains why Riseborough is the better half of W.E. Through the play of Wallis and Wally, Madonna seems intent on making some statement about how much this woman gave up to find happiness with the man she loved. W.E. tries to make some point about the plight of celebrity and of the perils of living in the spotlight, but the execution is so muddled that it’s hard to really discern anything beyond parallelism; moreover, it’s hard to make the effort to appreciate such a morale when the director’s own public life displays such a disdain for her fans. This point is not meant as a cheap shot at Madonna, but any effort to interpret the work of a filmmaking inevitably begs a viewer to read the film within some aspect of a director’s biography, and the disparity between the creator and the message of W.E. proves unsettling.
Despite the misfire, W.E. certainly displays improvement for Madonna as a director. It’s a far more ambitious project than 2008’s Filth & Wisdom, and Madonna pulls in some impressive production value for a picture with a budget as modest as fifteen million dollars. I’ll give her credit since it’s only her second movie. After all, Steven Spielberg made War Horse after …thirty features?
Rating: ★½ (out of ★★★★★)


W.E. is currently playing at the Carlton in Toronto.
It will soon be playing at The ByTowne in Ottawa