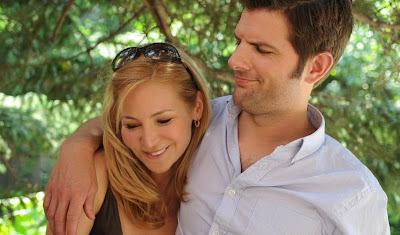 Well, it looks like the Bridesmaids have all grown up. Sort of. Aside from some familiar faces and some thematic overlaps, Friends with Kids shares no relation to the ultra-funny 2011 blockbuster, which holds the title of being the only film to bring explosive diarrhea to the Oscars. Friends with Kids has just as much to offer as Bridesmaids, and it should appeal to a similarly wide audience despite its comparatively smaller scale. This directorial debut by Jennifer Westfeldt, who co-wrote the 2002 indie hit Kissing Jessica Stein, is, like Bridesmaids, smart and funny, and sweet and coarse. It’s the first great film of 2012. 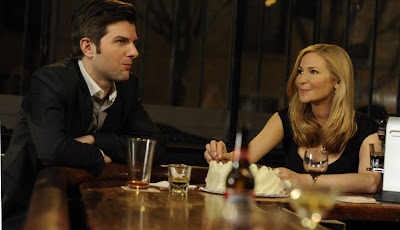 Westfeldt stars as Julie, a hot, single thirtysomething Manhattanite who loves her job and her group of friends. She’s Rachel Green without the credit card. Like Rachel, moreover, Julie has her Ross, who comes in the form of Jason (played by Adam Scott). Jason is suaver, richer, and far less awkward than Ross is, but Julie makes up in those departments, so they’re still a well-matched, but very platonic, set. Friends with Kids shows that romance between Julie and Jason is inevitable, for the film begins with one of those cute little scenes that work only in the smartest of romantic comedies. Julie calls Jason at 4 am. They’re both in bed with someone else, and they evaluate their romantic prospects to see if they’re worth bringing to the big get together with the rest of the group that night. 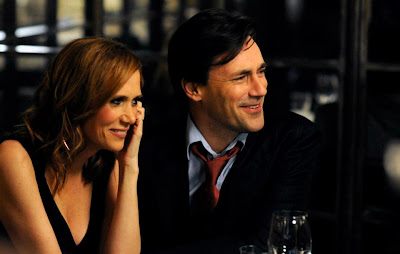 Julie and Jason both show up to the party alone. They are joined by their two pairs of married friends: Leslie and Alex, played by Maya Rudolph (Bridesmaids) and Chris O’Dowd (Bridesmaids), and Missy and Ben, played by Kristen Wiig (Bridesmaids) and Jon Hamm (Mad Men and, of course, Bridesmaids). All of the couples look to be in very different states. Missy and Ben are still in that stage where they can’t keep their hands off one another, for they join the party late after making a pit stop to the bathroom for a quickie. Leslie and Alex have taken the next step in their relationship and they proudly announce that they are having a baby. Julie and Jason, finally, are hardly there yet, for they pause to congratulate Leslie and Alex on their impending fetus only after observing the family at the table beside them, asking what kind of lunatics bring kids to a restaurant that charges a hundred bucks a plate. Who wants kids when you can have fun? 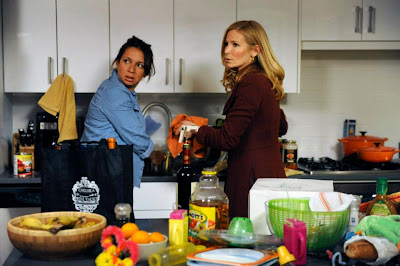 The years go by and Julie finds herself on one bad date after another. She’s getting so desperate that she lets Leslie set her up with someone in jail. It’s hardly a deal-breaker, since he is only a white-collar criminal, but that is hardly the kind of material Julie seeks in her baby daddy. Julie can’t seem to get babies off her brain, since virtually all her friends are now harvesting children. Julie is reminded of her singledom each time she opens her inbox and receives another poop-pic. Julie’s friends are clearly among the many people who fail to realize that just because they think their baby is cute does not mean that everyone else feels the same.
But Jason feels the same. After regrouping with their friends with kids and seeing how Leslie and Alex have gone from fun to fatigue, and how Missy and Ben have gone from twitter-painted to toxic, Julie and Jason decide that they never want to turn into their friends. They both want kids, though, and decide that the best way to have a baby is just to get it over and done with. Forget having it with someone you love: the best way to have a baby, they think, is to have it with someone with whom you can gladly share joint custody and then find romantic love that might not be compromised by the strain of raising a child. 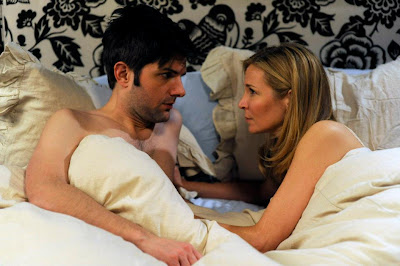 It’s a perfect idea. Two shots and nine months later, Julie and Jason find themselves raising a baby. Their friends all think they are crazy, but Julie and Jason prove them wrong, finding their unique child-rearing situation to be mutually advantageous for it gives them the joy of having a family but it still allows them all the joys of single life.
One remembers, however, what happened to Ross and Rachel after they had a baby. It’s difficult to go through such an experience without developing greater feelings for the other party. As Friends with Kids continues the experiment of this pseudo-family, Westfeldt takes her characters through a surprising coming-of-age story. Even though Julie and Jason think they got away with it, Westfeldt shows that it’s selfish to presume that one can have it all without having to make a few sacrifices.
Maturing into the realm of tragicomedy in its second act, Friends with Kids shows the trials and troubles of maintaining one’s idea of “happiness” when the responsibility comes to shift priorities away from oneself and one’s lover onto the new life brought into the world. In an age when one in every two marriages end in divorce, and when The Kids Are All Right shows that the idea of the “normal” family is changing, Friends with Kids suggests that the route to happiness and success can be unconventional and unexpected.
In her third act as writer and first attempt as director, Jennifer Westfeldt offers a smart portrayal of modern day mores and mommyhood. Friends with Kids is an honest look at the paradox faced by this generation, which emphasizes freedom and individuality yet still largely defines success through the nuclear family. Westfeldt shows how hard it is to have one’s cake and eat it, too, for her spirited roller-coaster of a performance as they bubbly Julie offers a refreshing portrait of growing up and letting go.
Taking the cast through some surprising avenues, Westfeldt is unafraid to show the messiness that also comes with raising a family in the modern age. She lets the bridesmaids show their adolescent bent in the first act, cracking all sorts of jokes about poop and vagina walls. Then, once the kids are faced with the reality of growing up, Westfeldt forces her characters to confront their imperfections in an impressively handled debate. She gets strong, surprising work from all – one hardly expects to see Kristen Wiig cry or Megan Fox act. The final act, however, takes a few predictable turns and comes to an oddly abrupt end, but Westfeldt still makes a strong observation and playfully takes rom-com convention to new levels.
By building upon her own relationship with actor Jon Hamm (who also serves as co-producer), Westfeldt offers a refreshing, authentic, and natural comedy.  Friends with Kids provides a welcome study on the current struggles and changing values of the current generation. It’s an impressive directorial debut. With her solid ensemble and insightful script, Westfeldt could very well be the next Nicole Holofcener if she keeps it up.
Rating: ★★★★ (out of ★★★★★)