Catch of the Day

Salmon Fishing in the Yemen 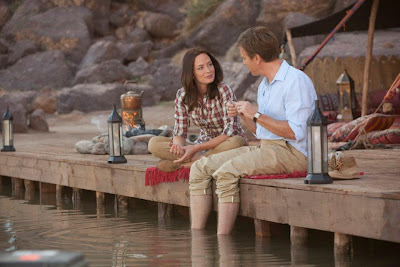 Ah, romantic comedies: the realm where delightfully preposterous premises such as salmon fishing in the Yemen lure one in hook, line, and sinker. Who would think that the Middle East provides a perfectly hospitable habitat for raising salmon so that one rich Sheikh can fish to his heart’s content? All one has to do, mind you, is build a river, erect a dam, divert the flow of water, control the ecology, and then steal 10 000 fish from the fish n’ chip stands of Great Britain and airmail them to the Yemen. And do all this while at war in the Middle East, no less. A bit of a pickle, one might say. 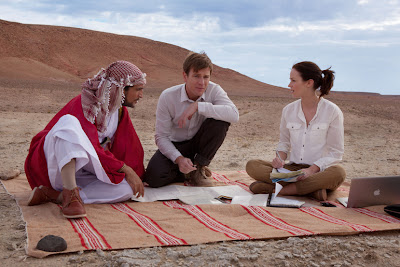 So is the outlandish situation in which the awkward Dr. Alfred Jones (Ewan McGregor) finds himself. After initially rejecting the proposition from the quite Englishly named Harriet Chetwode-Talbot (played by Emily Blunt), who makes the offer at the behest of her wealthy Sheikh investor, Dr. Jones eventually assumes the project at Her Majesty’s request. It all seems that the idea of salmon in the Yemen was picked up by some government peeps during a routine surveillance of the communications on Her Majesty’s system. This idea, moreover, is the perfect project for royal spin-doctor Patricia Maxwell (Kristin Scott Thomas), who needs a juicy little ditty to divert attention from a bombing in the Middle East that may or may not have British involvement. As Mrs. Maxwell shows, the Brits have a way with making news. It’s funny all right, and Salmon Fishing in the Yemen is clever, droll, and chipper. 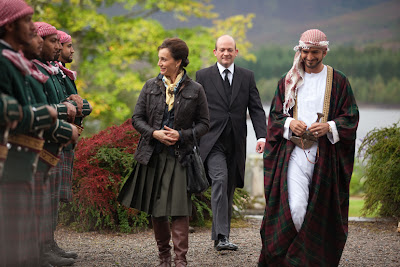 In an act ripped straight from Wag the Dog, Mrs. Maxwell changes the story. Whereas Dustin Hoffman created a war by filming Kirsten Dunst running amok with a bag of chips, Scott Thomas has McGregor put some positive spin on Anglo-Yemeni relations by generating quite the fish story. Like a fish caught by one’s drunk uncle, Salmon Fishing in the Yemen grows to extraordinary lengths, but one can’t help but buy into it, if only for the cheap thrill of its utter lunacy. Salmon fishing in the Yemen… that sounds as likely as a romance between a married dork and a hot posh Londoner. Oh, wait. 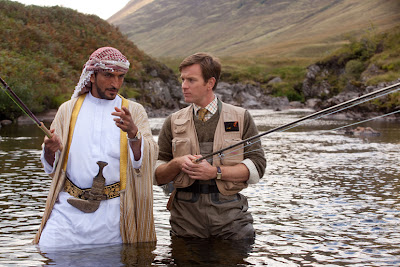 As Miss Chetwode-Talbot relentlessly pitches the project to Dr. Jones, Dr. Jones eventually takes the hook. Dangle the bait in front of the little fishy and it will soon give a nibble. Salmon fisher and scientist alike, Dr. Jones approaches the convoluted plan to appease the Sheikh from a variety of angles. It seems that the idea of introducing salmon fishing to the Yemen is not such a harebrained scheme after all.
It’s also the perfect set-up for a love story… what else arouses feelings besides the smell of fish? Miss Chetwode-Talbot is at first immune to the charms of Dr. Jones. Not because he is a bumbling ass, but because she has recently fallen head-over-heels for Robert (Tom Mison) a British soldier who was deployed for action in Afghanistan immediately when the salmon fishing project began. Through the small love triangle, Salmon Fishing in the Yemen lures out some slight observations of east-west tensions when Robert goes MIA, which is good, considering how one dimensionally the film depicts the Sheikh and his other fellow Middle Easterners. Salmon Fishing in the Yemen is hardly xenophobic, but the script by Simon Beaufoy (Slumdog Millionaire) barely aims for anything beyond romance and comedy. 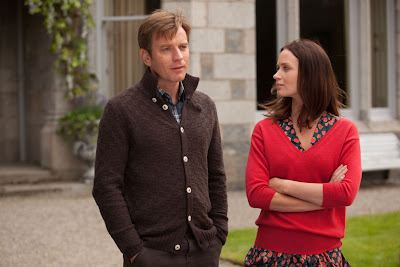 Salmon Fishing catches both those hooks, though, thanks to Hallström’s fun, light, and carefree handle of the material and his rapport with the actors. As Dr. Jones and Miss Chetwode-Talbot  (or “Fred” and “Harriet” once things get really intimate – this is a British film, after all) McGregor and Blunt make a charming and convincing couple. They sell the convoluted premise very well, and make a delightful story that should please even the most hardened of moviegoers. Again: fishy + dangle = nibble.

Particularly good is Kristin Scott Thomas, who appears on loan from France after an impressive string of performances in francophone dramas. Scott Thomas makes a welcome return to British cinema with her spirited turn in Salmon Fishing. Channelling the ghost of In the Loop’s Peter Capaldi to a most delightful degree, her type-A PR demon offers a fine bit of scene stealing and grants the actress some cheeky one-liners and flamboyant diva moments as Patricia Maxwell works her angels and casts the lines and respective hooks to her quirky diversion. Scott Thomas is so good, in fact, that Hallström’s little digressions into the realm of IM and other social media is highly effective, as the actress’s sourpuss expression on Maxwell’s avatar gives more life to the film than the sight of 10 000 CGI salmon swimming upstream.
Salmon Fishing in the Yemen, based on the novel of the same name by Paul Torday, is a happy throwback to films that jet audiences to exotic locales for a whirlwind romance and a little casual racism. It’s a delightful and heart-warming piece of escapism. With Kristin Scott Thomas providing a hoot, moreover, this fish story is a real catch. And they lived happily ever after… fish n’ chips for all!
Rating: ★★★ (out of ★★★★★)