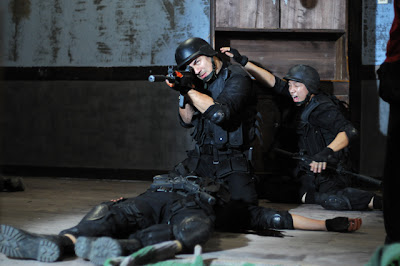 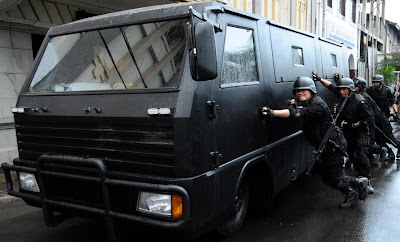 Were you among the moviegoers who found The Hunger Games lacking because its PG-13 rating softened the blow? (I wasn’t, but others were.) Well, look no further than The Raid: Redemption if you feel the need to satisfy your thirst for blood. A blood-soaked orgy of violence, The Raid proudly wears its R-Rating on its sleeve. It’s absolutely madness to think that American censors deem such content on par with Fuck, Fuck, Fuck, Fuck, but good on the producers of The Raid for piling up as many bodies as they like and getting away with it when a few cuss words prevent Harvey Weinstein from overturning a rating for Bully. 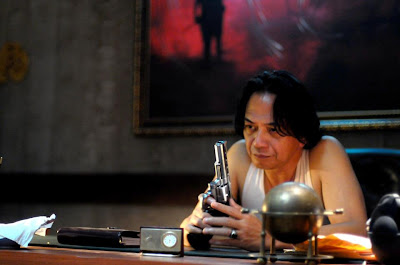 Thank goodness that the action is so absurd, for the film is otherwise quite conventional. Much like the other recent “action film for the festival crowd” EliteSquad: The Enemy Within, The Raid: Redemption is a brutal fable of police corruption that draws a blurry line between cops and criminals. The action begins with a twenty man SWAT team en route to take out an ominous baddie from a dangerous apartment complex. When Rama (Iko Uwais), the idealistic rookie of the team, asks for a rationale for the mission, his superiors simply tell him to fall in line. The smokescreen doesn’t help: once Rama and company are in the building, they find themselves completely unsure of whom they’re fighting.
The mission blunders almost immediately. Instead of sneaking in for a surprise attack, the SWAT team finds itself the victim of an ambush. What ensues is a battle royal-style standoff, with the cops and criminals picking each other off one by one. And yes, children die too, if fans of The Hunger Games are hankering for more.
The Raid quickly aligns the viewer with Rama. The film follows him as he fights his way from one situation to another. The most – if only – morally upright member of the team, Rama seems fit to survive because he a one-man hit squad with a cowboy’s sense of justice. From Rama’s perspective, The Raid strongly resembles a one-player combat-style video game. Even like the most basic version of Super Mario, The Raid sees its hero toil to move from one level to another, facing off against baddies of increasing power until he can ultimately square off against the boss man. (And me senseth that others noticed the video game parallel, too, since there was at least one viewer quoting Mortal Kombat during last night’s screening at the Coliseum.) There is no Princess Toadstool to be saved, though. The Raid is really an awesome free-for-all of testosterone and red corn syrup. 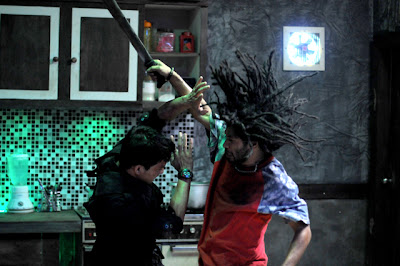 Winner of the People’s Choice Award in the Midnight Madness category at last year’s Toronto International Film Festival (back when it was simply called The Raid), The Raid: Redemption is a true gem for niche audiences that love splat and chuckle mayhem. Some of the fight scenes, though, run a bit too far into overtime – you’ll know when once the fanboys cry, “Finish him.” On the other hand, The Raid becomes memorable for how brashly it prolongs the kills, as they take on a comedic effect that zaps the tension. Most notable is a fight in the final act that sees one villain fight for several minutes after having a shattered fluorescent light bulb jabbed into his neck. (It must have missed his jugular.) The Raid might be one of the stupidest, most senseless, and most gratuitously violent films to hit theatres in some time, but that’s not necessarily a bad thing. Much like the first Kill Bill, it’s hard not to get high from the rush of the operatic violence and tap your foot to the pulse-pounding techno beat. Bodies fly and blood-gurgles, yet the more ridiculous The Raid becomes, the more fun it is.
It’s also a spectacular production. The Raid features some of the best fight choreography since The Matrix and Crouching Tiger, Hidden Dragon, all of which is captured in some stylish cinematography and editing. Unlike The Hunger Games, The Raid opts not to hide brutality through shaky camerawork and cuts. Instead, it holds on the carnage to offer a glorious ode to violence. Don’t bring grandma.
Rating: ★★★½ (out of ★★★★★)
The Raid: Redemption opens in Ottawa April 6th.
Posted by Pat Mullen at 3/30/2012 10:48:00 AM