Doppelgänger Paul (Or a Review About How Much I Hate Myself) 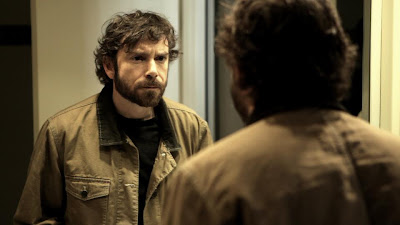 I hate myself for hating Doppelgänger Paul, since it’s a quirky little Canadian movie with a wonderful premise. Paul (Brad Dryborough) finds a note on his door from a man named Karl. Karl believes that Paul is his doppelgänger (i.e.: his double), so he has been following him since the two first crossed paths. It’s a strange, absurdist situation that has the potential to unfurl many philosophical musings. Unfortunately, though, Paul agrees to meet Karl immediately. Before the opening title card appears, the pair convenes in the park. Upon seeing Karl (Tygh Runyan), the first words out of Paul’s mouth are, “You look nothing like me!” Most people would have started running, but Paul decides to befriend his creepy stalker. 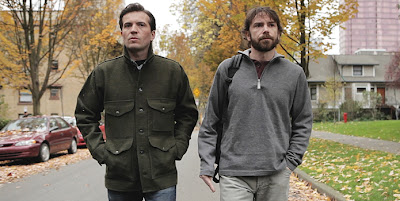 By having the supposed doppelgängers meet so soon, Paul quickly deflates. The air of Charlie Kaufman-esque oddity rapidly disappears, and leaves the film with a sense that it’s simply being weird for the sake of being weird. Since Paul encounters his doppelgänger straightaway, the film creates no real mystery to solve in the ensuing 75 minutes; moreover, the premise shifts from intriguing to ridiculously convoluted and unbelievable. There’s nothing deep or uncanny about watching two people talk about how they think they are like one another, but are not. 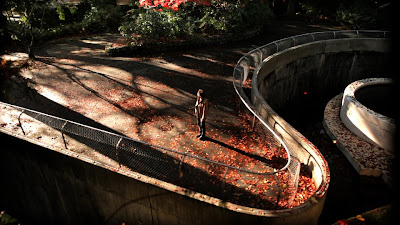 Paul and Karl are two of the hapless losers that so frequently appear in offbeat Canadian films. They are both lonely and wallowing in self-doubt, so the first few happenstances between them seem to comment on the sense of alienation one feels while leaving alone in the bizarro-land of Vancouver; however, one can only endure so much talk of self-loathing, especially when it arrives in laconic delivery that seems ripped from the worldof other filmmakers. Paul is purely imitative: it’s a doppelgänger copying something else in search of originality, if you will.
The search continues when Paul and Karl decide to take a road trip. Earlier in their friendship, Karl asked Paul to read his manuscript. Entitled A Book About How Much I Hate Myself, Karl’s memoir is a personal introspection of his life that has been a series of troubles since his parents died in a fiery bus accident in Quebec. (What is this, Incendies?) Karl’s book, however, has been published by two dead-ringers for the pair, whom Paul first discovers on some early morning talk show. Irked that someone else is cashing in on his misfortune, Karl convinces Paul to hit the road to confront the mysterious pair.
As the film shifts from odd urban navel-gazing to a buddy-style road movie, Paul takes a bad turn. It simply seems without direction, if not in search of the great premise that seems to have run away. Doppelgänger Paul never really goes anywhere. 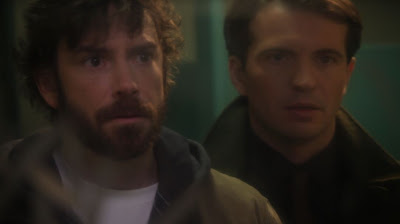 Dryborough and Runyan make the journey amiable enough – Runyan is effectively weird as the eerie Karl, and Paul offers a few mild chuckles along the way, but little else. The film might have gone further with its musings on urban isolation and so forth had the doppelgängers not met immediately, or had the film been a twelve minute short instead of a feature. Additionally, the film is dark not in tone, but in composition: Paul looks like it was shot with only available light (or a 60 watt bulb), and, frankly, it’s hard to discern what one is actually looking at. Unlike other great little Indies that have emerged from Vancouver’s film scene, such as Kissed or Last Wedding, Doppelgänger Paul is weird, but not endearing. I really wanted to like this oddball comedy, and I hate myself for not.
Rating: ★★ (out of ★★★★★)
Doppelgänger Paul is currently playing in Ottawa at The Mayfair
Posted by Pat Mullen at 3/31/2012 10:48:00 AM