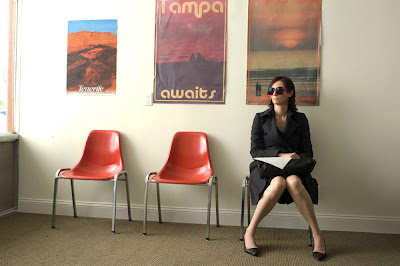 I saw We Need to Talk About Kevin at TIFF in the fall and it absolutely floored me. A truly powerful film despite the difficult subject matter, Kevin is wholly accessible thanks to the unique and personable style of director Lynne Ramsay. (I had the pleasure of teaching her first feature, Ratcatcher, while TA-ing Film 1000 last year, and I can honestly say that she is one of the strongest, most original voices in contemporary filmmaking.) Kevin made my list of Top Ten films of 2011 thanks to the power with which Ramsay tells this story; moreover, both Swinton and Miller made my lists for the Ten Best lead and supporting performances, respectively. Tilda Swinton makes the film especially harrowing, as she gives the performance of her career as Eva. The whole drama of We Need to Talk About Kevin plays out on Swinton's face as she relives and imagines the horror of Kevin's crimes. She was truly robbed of an Oscar nomination. Regardless, you'll agree she's in top form. If you care at all about supporting the best and bravest in cinema, you'll be talking about Kevin in the days to come.