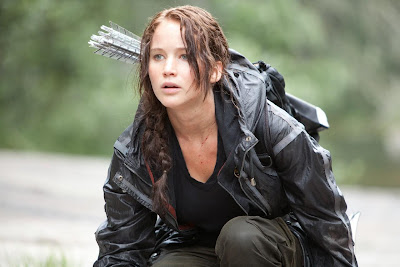 As I sat in the crowded theatre waiting for The Hunger Games to begin, I took note of the fact that the screening was jam packed for 10:30 am on a weekday. It was not a holiday, so hordes of students were clearly playing hooky so that they could experience the latest teen movie sensation before the other kids in school. It was nice to see so many people excited about a film; however, as the coming attractions began, the previews advertised a new Cabin in the Woods; the remake of Spider Man, since the 2002 reboot wasn’t recent enough; Titanic 3-D; the Iron Man/Thor/Hulk/Captain America gangbang The Avengers; and Twilight 4: Part 2. It’s scary that the most original film appeared to be this year’s second adaptation of Snow White. The Hunger Games, however, looks to be that franchise that has long eluded Hollywood. 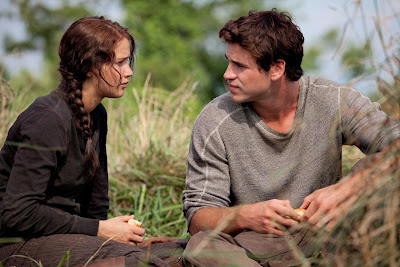 I’ll start by saying that I haven’t read the book by Suzanne Collins, so anyone looking for tiresome fidelity criticism best look elsewhere. (People surely will, considering the group behind me actually rhymed off each character’s hair and eye colours before the film began.) If you’re going to gripe that the scene with whatshisname was omitted or thisandthat was cut out, just go read the book again; otherwise, kindly realize that a literal translation of the book would run a dull six hours. The Hungers Games is already a whopping 142 minutes. That isn’t long by conventional standards if one appreciates thatTwilight was essentially a brainfart that lasted two hours.

The Hunger Games succeeds because it does what most other blockbusters geared to younger audiences have failed to do. It builds a strong story, interesting characters, and complex emotion. Although it provides plenty of action, it rejects spectacle.

The strong development of The Hunger Games is essential, for anyone who is unfamiliar with the novels can follow the premise quite easily. There are no discernible holes in the logic of The Hunger Games, and any gaps help create the film’s strong dystopian tone. Set in the future, “The Hunger Games” is a popular television show that doubles as a form of social control. An uprising occurred years before, so now, as punishment, each of the twelve districts must offer two citizens – one boy and one girl – as tributes to the fallen citizens of the uprising. These twenty-four youths, all between the ages of twelve and eighteen, must then battle to the death. One winner survives to remind the citizens the value of sacrifice for their nation.

The Hunger Games should probably credit past films like Battle Royale and Series 7 in addition to Collins’s book, since both films tell of a world in chaos as viewed through the violent and perverted eye of reality television. The blatant rip-off is largely forgivable, though, since The Hunger Games is just as good as those films are, if not better. Whereas Series 7 follows its reigning champion, Dawn (Brooke Smith), The Hunger Games also takes the perspective of one female contestant. That girl is Katniss, played by Jennifer Lawrence (Winter's Bone). 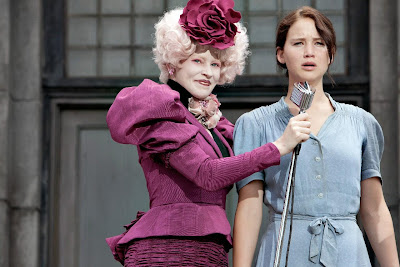 Katniss becomes the female tribute for the twelfth district when she valiantly volunteers for the role. Tributes are usually selected via a random lottery, but Katniss’s twelve-year-old sister, Prim (Willow Shields) was selected, so Katniss offered herself instead. It’s an act that wins approval from Effie, the garishly clad ringleader for the Games in District 12, played with delightful flamboyancy by Elizabeth Banks. The boys aren’t quite as heroic, with Peeta (Josh Hutcherson from The Kids Are All Right), winning the lottery when no male volunteers. 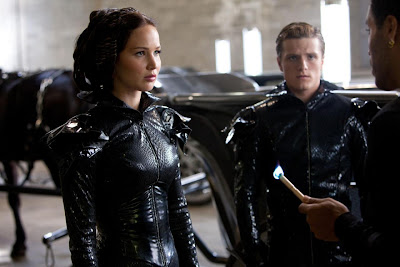 Katniss and Peeta are then subjected to a long media blitz before the games begin. It’s sort of like walking the green mile en route to the electric chair. To win the Games, Katniss and Peeta must impress the other minions of the Capitol to gain sponsorship and support that might bring them necessary supplies once they are thrown in the ring. Throughout the preliminary stages, which include training, survival skills, and makeovers, Peeta appears to be a genuine media darling while Katniss’s air of self-effacing malaise keeps her under the radar. Once she receives some final advice from Haymitch (Woody Harrelson), a past winner of the Games, the reality of her impending death hits Katniss and she shows the public that she is a skilled archer and is far more outdoorsy than the Tributes from the inner Districts. She also has a strong sense of character (and fiery good looks) and becomes the odds-on-favourite on the eve of the games. 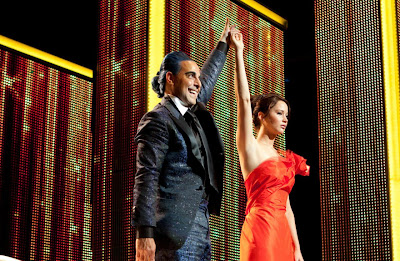 The Hunger Games makes a substantial development before actually dropping the young characters into the battle royal. As a result, one has considerable investment in both the Tributes from District 12, especially once Peeta confesses his love for Katniss during the media circus. Although there are twenty-four tributes, one assumes that the fight will amount to a duel between the star-crossed lovers.

The Hungers Games, however, is frequently unpredictable and avoids many of the conventions and clichés of other inane teen-movie fodder. The Hunger Games is hardly a “teen movie” at all, actually. Everyone in the family can enjoy this film because it’s smart and action-packed. Whereas only Little Susie might spend her hard-earned allowance to watch Edward and Bella say “I do,” The Hunger Games could – and should – enjoy ticket sales from Little Bobby, and Mom and Dad, too. Ca-ching, ca-ching!

Although the film is arguably family oriented, it hardly forgoes the visceral rush that one feels in action films with an R-rating. Thanks to a phenomenal editing job by Juliette Welfling (The Diving Bell and the Butterfly) and Stephen Mirrone (Contagion), The Hunger Games avoids the literal bloodshed that would restrict its core fan base from the theatre. Additionally, as the film cuts away, it adds some precarious handheld camera work and oft-shifting focus from DP Tom Stern to create a sense of swift disorientation and affect. These are kids killing each other in hand-to-hand combat, after all. 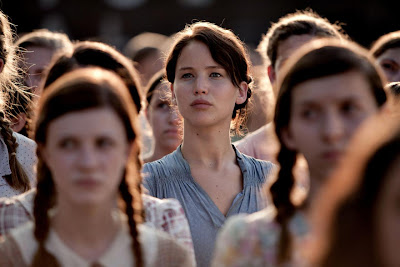 The Hunger Games also works well for a general audience thanks to the strong moral centre it provides to its lead heroine. Unlike some of her competitors who relish the bloodsport, Katniss only kills out of self-defence; moreover, while some of the other kids take a cue from Survivor and form an alliance, Katniss protects some of the younger competitors even though they may prove a liability when confronted by the stronger players. Lawrence plays Katniss with remarkable strength and range, making an easy ally for the viewer. She proves that her strong turn in Winter’s Bone was no beginner’s luck, and makes an impressive career step by showing off in an age appropriate role. Few other stars her age are also “actresses”.

The Hunger Games deserves the hype that has been steadily building upon the film’s release. A solid piece of escapism and entertainment, this film by Gary Ross (Seabiscuit) puts most other blockbusters to shame. Although I won’t touch another Twilight film with a forty-nine and half foot pole, I’ll surely join the fans of Collins’s series in anticipation for the next installment. Happy Hunger Games: may the odds be ever in your favour.

The Hunger Games is currently playing in wide release.