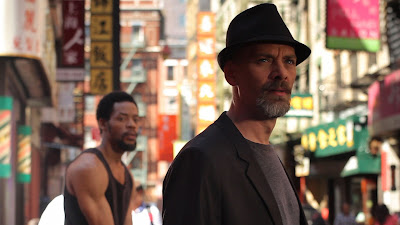 When seeing Hartley’s Simple Men a few weeks ago, I couldn’t help but squirm in my seat as I realized that the film would have been ended twenty minutes sooner had every character not repeated his/her lines twice. Thankfully, then, the characters in Meanwhile are economical in their verbiage and the film is only a brisk 58 minutes. Hartley, meanwhile, scales back much of the eccentricities that make his films so popular, or alienating, depending on whom you ask. 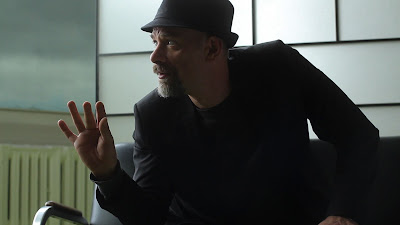 This project, however, was supported greatly through the social media site Kickstarter, which enables fans to connect with their favourite artists. Kickstarter essentially encourages consumers to support artists directly, rather than have them rely on funds from sources that might ultimately compromise artist vision. This is not to say that Meanwhile lacks the Hal Hartley-ness that devotees of smart independent comedy have come to expect and enjoy. The director’s persona reverberates in every frame of Meanwhile: with a nod and wink, and an occasional name-drop, Hartley invites us into his unique perspective on contemporary American once again. This is instead a much more modestly scaled Hartley film that capitalizes on his strong writing and theatrical-style direction.
Meanwhile’s Joe Fulton (played by dependable Hartley regular DJ Mendel) is another of Hartley’s all-American anti-heroes. He means well, but he is perpetually down on his luck. He calls himself a producer even though he is really a jack-of-all-trades, taking whatever job he needs to get by. The film begins with Joe, the plumber, earnestly fixing the sink when his topless jailbait girlfriend tosses him out. It’s a cold dismissal, as she doesn’t even both to remove her ear buds, but what’s done is done. 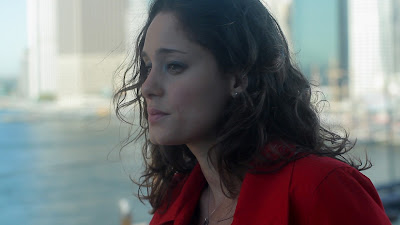 Joe’s day gets worse when he tries to contact some friends for updates. His phone is out of minutes, but all his credit cards are frozen. Stranded with thirteen bucks and zero phone time, Joe makes the long walk across the Brooklyn Bridge. Luckily, though, he comes across a despondent woman (Chelsea Crowe) who muses on what it might be like to jump from such a great height. Not at all enticed by the lemming-like scenario despite his awful day, Joe gives her the once-over and asks to borrow her phone. He manages to get a hold of his friend Miho in Shanghai. Miho is Hal Hartley’s wife, both onscreen and off. Much to Joe’s good fortune, Mrs. Hartley won’t be back for a few days, so she gives Joe permission to pick up the keys from Hal’s secretary, Tuesday, at the office of Possible Films. It’s Hartley’s own office (presumably), as noted by the poster for Fay Grim hanging above Tuesday’s desk. (I decorated the grad office at Carleton with the very same poster… all film students need a little Parker Posey to brighten up their day.) The novel mise-en-scene and casting is just one of the clever – and meta – ways that Meanwhile employs its budgetary constraints. 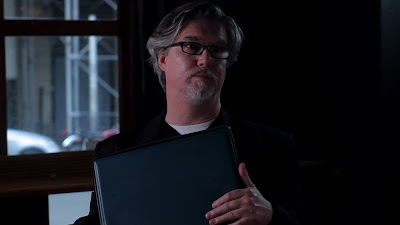 Much like the woman on the bridge, Joe encounters a variety of New Yorkers who change the course of his day. Throughout the fourteen chapters of Meanwhile, Joe always finds time to better the lives of others even though he cannot seem to do the same for himself. One particularly noteworthy happenstance occurs in a dark little pub in which Joe meets a Famous Author (Stephen Ellis). The Famous Author needs a hand fixing his typewriter, which Joe does gratis even though he gave his last thirteen bucks to a former employee. The Author then repays Joe with some career advice and philosophical musings. An author himself (Tuesday reads his book, titled Meanwhile, while all this happens), Joe learns that he can’t become a puppet for Corporate America. Hartley emphasizes this tale with cuts to a comedic threesome of reaction shots of the bar wench as she teases Joe with a marionette. Independence, it seems, is crucial to conveying one’s message to the audience as best as possible.
A better DIY filmmaking effort than Kevin Smith’s Red State, but not quite in the league of David Lynch’s Inland Empire, Hal Hartley’s Meanwhile is nevertheless another worthy entry in the director’s career as a pioneer in American independent filmmaking. The relative small-scale of the film, as well as its origins in the digital domain, might mean that the former Sundance kid’s film will play just as well on a tablet as it does on an HDTV. These elements, though, might ultimate prevent Meanwhile from reaching the big screen and some of the audiences that have come to love the wacky world of Mr. Hal Hartley; however, if you’re watching the film on your iThing, you might find yourself in on the joke. Meanwhile suggests that the technologies that empower us may ultimately inhibit us: as Joe’s odyssey shows, he lives in a world in which connectivity is restricted to depletable mobile minutes; likewise, these handy gadgets seem to be the only things capable of hitting a moving target. There’s probably an app for that.
It might not be as ambitious as Henry Fool or as funny as Trust, yet Meanwhile might arguably by Harley’s most accessible film to date. It might also be his most optimistic. Thanks to its simple style and thematic clarity, and, of course, the laconic line delivery of the actors, the allegory of Meanwhile is sharp and clear. Hartley seeks not to make a statement on the decline of America, or the pitfalls of capitalism through this tale of Joe’s hard knocks; rather, he raises these questions and invites the audience to ponder the themes on their own. Despite being a scant hour, the effect of Meanwhile lasts much longer.
Rating: ★★★½ (out of ★★★★★)
Meanwhile  is currently available on DVD from Hartley’s company Possible Films.
Posted by Pat Mullen at 3/16/2012 06:51:00 PM