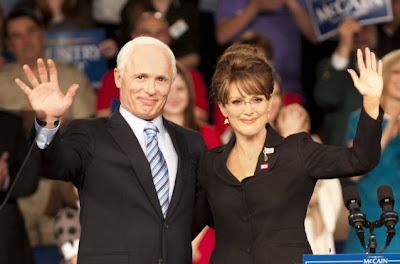 Watch out Hollywood! If HBO keeps giving juicy roles like these, the best and brightest stars of the silver screen may eventually keep to the small screen instead. Kate Winslet gave the best work of her career last year in Mildred Pierce, and there was Claire Danes in Temple Grandin the year before, and so on, and so on. Julianne Moore is HBO’s latest running mate in Game Change, the timely adaptation of the book by Mark Halperin and John Heilemann that chronicles the behind the scenes campaign to make then-Governor of Alaska Sarah Palin the next Vice President of the United States. 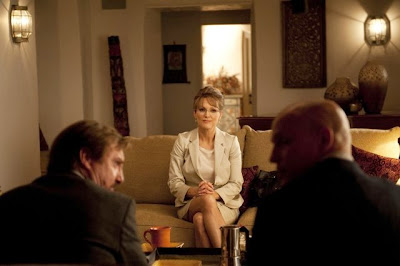 Moore easily gives her best work since 2002’s Far From Heaven in her performance as the controversial caribou Barbie. It’s hard to imagine anybody do a better Palin than Tina Fey, but Moore pulls it off. Uncannily so, as she often makes it difficult to realize that one is watching a dramatization and not a documentary featuring Palin herself. Not only is she a dead-ringer for Palin in terms of likeness and speech, but she captures the eerie spunk, energy, and likability that makes Palin such a charismatic leader. Much like Meryl Streep’s recent tour-de-force as Margaret Thatcher in The Iron Lady, Moore gives a performance that is not afraid to explore the faults and imperfections of her real-life counterpart, but still deliver a fair portrait and demand sympathy despite whatever preconceptions one brings to the film. It’s the kind of work that would merit Oscar consideration for Moore if Game Change were released theatrically. Moore proves that the ad line, “It’s not TV. It’s HBO” is truly not false advertising.
Game Change introduces Palin in a last minute shakedown on the McCain campaign. As the campaign works its way to the Republican National Convention, Senator John McCain (played by Ed Harris, who bears less likeness to his counterpart than Moore, but sells the part well nonetheless) needs to pick a running mate with the chomps to oust Barack Obama from the media spotlight. As McCain’s campaign advisor Steve Schmidt (Woody Harrelson) conveys while watching Obama rally the troops in Berlin, Obama is a celebrity, not a proven politician. In the age of Google, YouTube, Facebook, and Twitter, a candidate’s showmanship is as important as his credentials.
As a result, they need a “game changer,” i.e.: someone much different from McCain’s choice veep Joe Lieberman. Moreover, the Republicans need to close the crucial gap in the women’s vote that was thrown to the Democrats when Hilary Clinton was in contention. The rest is history.
Palin is flown in from Alaska just as quickly as one can say, “you betcha!” Few interviews are done and a background check is limited to Wikipedia and YouTube. All that matters, it seems, is that she has the makings of a maverick media darling.
Game Change therefore succeeds in its deconstruction of Sarah Palin because it goes not for a personal attack, but rather shows that she was fatally under-qualified and under-prepared to become Vice President of the United States. If anything, Game Change puts the onus on McCain for making a serious error in judgement; however, the film’s portrayal of the Senator surely lets him escape with his dignity intact. One cannot quite say the same for Palin, especially since Moore represents her quite fairly. 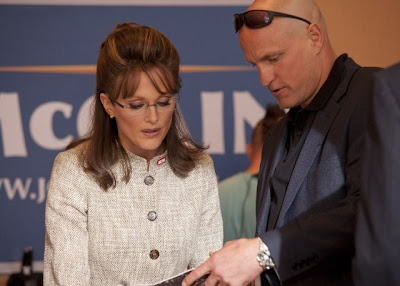 The film shows Palin at the height of her power and popularity, demonstrating how and why she connected so well with a thread of America through her candid attitude and relatable idioms. (Strangely, though, the film neglects mention of Joe the Plumber.)  However, like The Iron Lady, Game Change portrays Palin as a leader undone by power. The implications at mental instability certainly invite an easy avenue for Palin supporters to criticize the film: Game Change might have been even stronger had it sufficed with suggesting how Palin’s inability to handle the pressure disqualified her as a worthy candidate. On the other hand, the film shows that the surprise of Palin’s emotional volatility is merely one example of the error in judgement in the campaign for putting her on the ticket.
Game Change chronicles Palin’s collapse as her team guides her through a series of kindergarten lessons and feeds her buzz lines and canned answers. As Palin’s campaign team preps her for all sorts of interviews and debate, Palin is like a deer caught in the headlights. It seems that a self-imposed Alaska garrison shaped all her experience and gusto. She performs brilliantly in the spotlight and uses her genuine pride as an American mother with a son in Iraq to garner support; however, when asked by her team why her son is in Iraq, she replies, “to fight Al-Qaida.” Yikes. Like the skits by “Saturday Night Live”, Game Change is at its best and most terrifying when it simply repeats Palin’s words verbatim.
An overall strong and ballsy effort, Game Change is a winner. Directed by Jay Roach, who also did the HBO film Recount, which told of the Florida disaster in the Bush vs. Gore election, Game Change is a smart and savvy lead-up to the next election. The ringleaders on the McCain-Palin team are particularly well-served with Woody Harrelson continuing his string of impressive work after The Messenger and Rampart as Steve Schmidt, and Sarah Paulson (Martha Marcy May Marlene) giving excellent support as Nicolle Wallace, a senior advisor of the campaign who displays the most doubt during the team’s exercises with flashcards and Diet Dr. Pepper. In fact, Wallace was so put-off by Palin’s performance that she couldn’t bring herself to vote come election night. After seeing Game Change, then, one can safely assume that the only chance one has to vote Palin in 2012 will be by casting a vote for Julianne Moore in the election for Best Actress during this fall’s Emmy race.
Rating: ★★★★ (out of ★★★★★)
Game Change is currently playing on HBO Canada.
Posted by Pat Mullen at 3/15/2012 10:23:00 AM