Aida: A Natural Born Artist
(Japan, 99 min.)
Dir. Shogo Watanabe
The first of three films of day to to tell of artists and the creative process, Aida: A Natural Born Artist chronicles a year in the life of Japanese contemporary artist Makoto Aida. During this time, Aida struggles to complete several oversized works of art for an upcoming show. He secludes himself in Beijing so that he can finish his strange, provocative works.

Aida: A Natural Born Artist is fairly good at depicting the time and energy that goes into creating such masterful works of art. The film is often tedious with how it shows the slow process that goes into making Aida’s art, but it also evokes those flashes of genius that are required to complete them. The greatest work that Aida makes during the film is “Ash Colour Mountain.” The painting offers mountains of corpses heaped amongst the garbage, mountains of corpses wearing Mad Men-ish suits to evoke what Aida’s wife Okada Hiroko (an artist herself) calls a vision of hell that makes one happy while looking at it.

Aida’s wife proves an equally if not more interesting subject, as she explains her anxiety over finding her own voice while living with such an acclaimed artist. Aida’s inconsistent work ethic demands much attention from Hiroko; she also cares for their son while Aida frets over the smallest imperfections of his work. In fact, the film sees the artist leave a work of four years incomplete so as to finish a bunch of tedious imperfections that can be seen only by the artist himself. It’s unfortunate, though that this film about art is not more visually arresting, although Watanabe frames the Ash Mountain  from several evocative angles that capture its grandeur and ambition. The final image of the Ash Mountain, moreover, offers a poignant note about the relevancy of such provocative art and of the longevity that such works have as pieces of cultural expression. 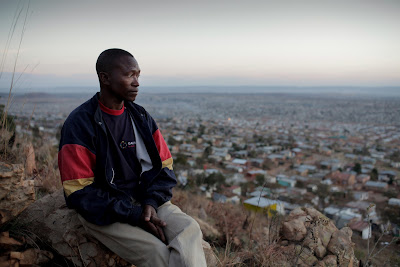 Meanwhile in Mamelodi is a beautifully shot film that shows a side of South Africa that most failed to see during the broadcasts of the 2010 World Cup. The film shows a small township of shacks and slums known as District 11. District 11 is an all-black township with few to no amenities. Meanwhile in Mamelodi depicts a cultural and generational gap by following one family, the Mtsweni family, and showing their engagement with the World Cup as they work to survive. Focussing mostly on the father, Steven, who runs a small tuck shop and also acts as the primary caregiver for his children due to his wife’s mental illness, Meanwhile in Mamelodi reveals an effort to remain hopeful and provide for one generation what was absent for another.

In Meanwhile in Mamelodi, the World Cup serves as little more than background noise, which mostly comes in the form of the annoying buzz of vuvuzelas. Like the appeal of the vuvuzelas, though, Steven notes that the enthusiasm for the World Cup seems to wane as the event progresses. This sentiment is an appropriate metaphor for the whole event, since Steven’s testimony reveals how the World Cup’s presence in South Africa is little more than a fantasy for the citizens of Mamelodi. The commercial benefits of the event serve only large corporations: as a small business owner, Steven is not even allowed near the event. The documentary therefore succeeds in delivering an alternative portrait of South Africa by showing what was left outside the frame of the footage of the World Cup broadcasts. On the other hand, though, what exactly the film is trying to say in its representation of the shacks and slums of Mamelodi is unclear. One can’t help but walk away from the film with some discomfort, since the film clearly shows a large population living in dire poverty, but then depicts them as happy and merry. This is not to say that hope does not exist in such places, but the happy sense it evokes serves more to reassert the status quo rather than to question it. Regardless, the citizens certainly seem happy to be included and to be afforded the chance to tell their stories when they are otherwise excluded from this major event.

Despite the Gods
(Australia, 85 min.)
Dir. Penny Vozniak
Easily the best and most enjoyable film of the day, Despite the Gods depicts the efforts of filmmaker Jennifer Lynch (Surveillance) to shoot a film in India. Lynch is the daughter of acclaimed director David Lynch (Mulholland Dr.) and was known mostly as the writer/director of the notorious (and Razzie-winning) Boxing Helena until her brilliant 2008 horror film Surveillance redeemed her. Despite the Gods shows the cruel twist of fate that undercut the success of Surveillance for Lynch by revealing what happened during the shoot of her third feature Hisss, a Bollywood action/musical/etc. film about a snake that turns into a woman that turns into a snake.

Much more than a “behind the scenes” film and a far more engrossing tale of the artistic process than Aida, this debut feature by Penny Vozniak reveals a textbook case of “Murphy’s Law” during Lynch’s shoot of Hisss. (It seems that when fortune smiles at some, it laughs at others.) The film opens with a shot of an exasperated Lynch referring to the project as her “pasta clusterfuck.” What she means is that it can be great to have a few extra hands willing to help out in the kitchen, but when you have too many hands trying to stir the pot with the same spoon, she says, it does not end well. Everything that could go wrong does go wrong for Lynch during her eight nightmarish months of shooting in unfamiliar terrain.

Despite the Gods nevertheless depicts an impressive case of perseverance in the face of adversity and adaptation to difficult circumstances. In spite of the spotty résumé for Lynch’s qualifications to direct an omnibus Bollywood film, one can see how the disaster of Lynch’s third directorial outing was more a victim of circumstance than inexperience. In addition to a variety of competing visions, Lynch was forced to work with an overzealous assistant director, a well-intentioned leading lady with a serious diva complex, a crew strike, language barriers, and unpredictable weather. She is, however, consistently buoyed by her self-deprecating humour and, her then thirteen-year-old daughter Sydney who accompanied on the shoot in India and provided some much needed insight.

Although the film is often uproariously funny (Lynch has a very big personality), film is surprisingly sad as it shows Lynch struggle to come into her own as an artist due to the constraints of the production. The film says surprisingly little of the pressures of growing up in the shadows of her filmmaker father; alternatively, Lynch’s attitude positions her artistic parents as great inspiration. She also uses the notoriety of David Lynch’s Dune as a precedent for her need to prevent too many parties from “stirring the pot” and compromising her film and, by consequence, her reputation. Wozniak’s film, then, is an impressive case of artistic appropriation. Even though Lynch eventually lost control of Hisss during its final cuts (she has yet to see the film), she ultimately made a great film with Despite the Gods. Despite the Gods certainly makes Lynch appear to be an artist in her own right, as Vozniak’s footage conveys a filmmaker working relentlessly to adapt the restrictions of her situation in order to deliver a film that remains true to both the parameters of her assignment, as well as to her own artistic vision. In its fun and tumultuous portrayal of the production of Hisss Despite the Gods ensures that even the most disastrous work can be the stuff of cult legend and B-movie greatness. 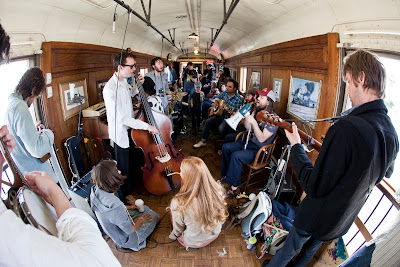 All aboard the Big Easy Express! This concert film shows a great travelling act of three bands – Edward Sharpe and the Magnetic Zeros, Mumford & Sons, and The Old Crow Medicine Show – as they hit the rails on the Big Easy Express, a train en route to New Orleans for a series of outdoor concerts. As expected, the film offers an hour of great music. These three bands sound terrific together and there is a tangible synergy between the groups, which provides some great scenes of the bands jamming together as the train makes its way across America.

Big Easy Express features some fun concert footage, especially of Edward Sharp and the Magnetic Zeros performing their mega-catchy hit “Home” and of Mumford & Sons performing “The Cave” with a high school band. The best set piece, however, is the grand finale, which culminates with the final stop of the Big Easy Express in New Orleans and sees all three groups join together and perform a new song. On the other hand, the footage privileges Ed Sharpe and Mumford, but gives less coverage to the Old Crow Medicine Show. (As someone unfamiliar to the latter group, I think that it might have been beneficial for them to receive equal coverage.) The film will certainly have viewers tapping their feet and wearing a smile on their face regardless.

The pic should play very well on home vid because fans can blare the music as loud as they want and rock out without having to worry that they are disturbing fellow moviegoers. (The one patron rocking back and forth in her seat at The Royal last night might have enjoyed the show at the expense of others… although I certainly found her good vibes to be infectious.) Seeing the film at home also makes it okay for fans to whip out their lighters/cell phones to demand an encore, which might not make for good etiquette at a movie theatre. At a brisk sixty-six minutes, too, Big Easy Express will certainly leave fans wanting more. Alternatively, seeing the film in the comfort of one’s own home affords the benefit of popping on some of the bands’ albums and continuing the fun.