Atwood and the 'Scrooge Nouveau' 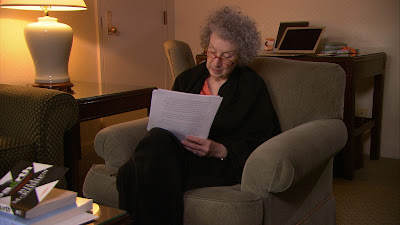 Based on the book Payback: Debt and the Shadow Side of Wealth by Margaret Atwood, this new doc, directed by Jennifer Baichwal and presented by the National Film Board of Canada, explores the history and philosophy of indebtedness. Atwood first presented her study of debt at the 2008 Massey Lectures. It was a timely subject then, what with the onset of the recession and all, and Payback feels just as timely in 2012 now that the public is feeling the repercussions of the recession, or to put it in the language of the film, paying of this great debt.

Fans of Atwood’s book might initially be disappointed to learn that we don’t get to hear from the author directly. The Queen of Can Lit certainly appears in the film: Baichwal films Atwood as she sits in a hotel room and clacks away at the keys of her MacBook Air. Atwood also appears via footage of her 2008 lecture, which serves as voice-over narration for the shots of Atwood in the creative process. Instead of asking Atwood directly what inspired her to write the book, or asking for further elaboration of her perspective on debt, Baichwal creates a sense of Atwood riffing on the work. The scenes work to contextualize the rest of the film, and the latter work to show the scope of Atwood’s book and to reveal just how large the cycle of debt goes.

Payback shows the reach of indebtedness by cross-cutting the Massey Lecture with six different stories of people in debt. The film offers several forms of payback and penance, which stem from the phrase that spurred Atwood’s query, “He has paid his debt to society.” The film shows the source of such penance by cutting to the eroding ruins of Eastern State Penitentiary. As the curator explains, Eastern State was the first penitentiary. The building has a number of elaborate cells that were built to host a large number of inmates in isolation. The wrongdoers would sit by themselves and ruminate on what they did and do penance by learning of their mistakes. It turns out that the penitentiary was more likely to create madness than civil do-gooders. 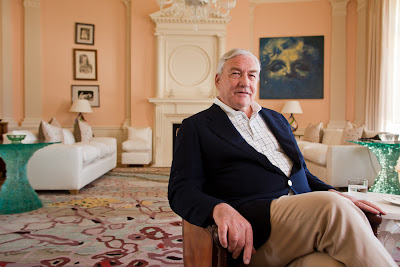 The film furthers this question of how someone repays society by interviewing two current inmates. One is Paul Mohammed, a petty thief and drug-addict who has been in-and-out of jail routinely. The other is media-mogul Conrad Black, who speaks from his swanky mansion in Florida. Mohammed explains the inadequacy of his payback to society, since he keeps returning to jail, but nothing is done remedy the cause of why he is a repeat offender. Black, on the other hand, offers some hilarious and eloquent rationalizations on the pros and cons of the penal system, as well as for the various “crimes” that might be created by “misplaced cunning.” The juxtaposition between Mohammed’s situation and Black’s situation helps further the film’s argument that society’s emphasis on payback and atonement is flawed, since not everyone has the same access and opportunity. The point is underlined by Atwood’s sardonic reflection on the “trickle down” effect from the wealthy, noting that the metaphor works for the rich since it’s merely a slow leak and not a gushing waterfall. 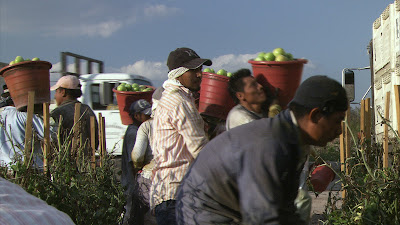 In terms of financial debt, Payback tells of a dispute between the Coalition of Immokalee workers and the Pacific Tomato Growers. The former are employees at a tomato farm: they’re Mexican migrants and they’re essentially treated as slave labourers. By showing the negotiations between the unions and their superiors, the film shows that all financial compensations must also be mindful of the human element that makes such debts significant. This narrative is arguably the most hopeful element in the film. 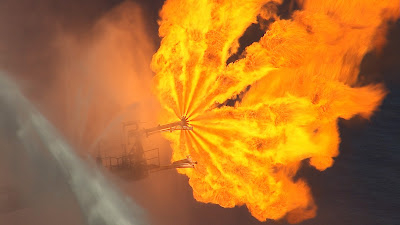 Payback also explores if and how debt can be paid when the cost is not solely financial. Baichwal uses the recent case of the BP oil spill to show the exorbitant environment damage caused by the disaster. The shots of the oil corrupting the ocean and blackening the shores offer the most evocative imagery in the film, and the images are paired with the talking heads of the film to ask when kind of justice is served when BP pays a sum of twenty billion dollars in damages, yet the estimates for the damage range from thirty billion to an excess of one-hundred billion dollars. How can anyone – individual or entity – repay damage that might be irreversible? 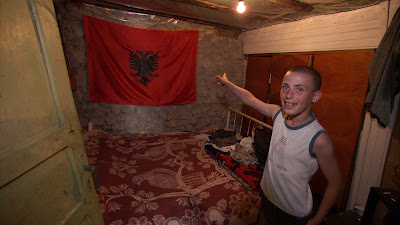 The most interesting story tells of a blood feud in rural Albania. One man is confined to his home in some arcane form of house arrest. His neighbour has the right to shoot him if he leaves. As both the debtor and “debtee” explain, the man must stay at home because the former shot his neighbour three times with a machine gun when the latter allegedly got in a spat with the other man’s wife. The reason the one man is paying for his crime, the victim says, is not so much for the shooting, but for the fact that the debtor claims he fired the shots because the other man hit his wife. Man B denies this, and for this reason, Man A must be isolated from the community for disgracing another man’s name. What good does this repayment have, though, when the only result is personal satisfaction; moreover, why should the family of the debtor be incorporated into their father’s debt?

By approaching the subject from the forms of legal, financial, moral, environmental, personal and communal debts, Payback questions effectiveness of systems that evaluate debt, reciprocity, penance. The film shows that debt is largely a mental construct, not to mention a product of man-made systems like capitalism and economics. The question returns to Atwood, who, in her sole direct address to the camera, introduces her story of Ebenezer Scrooge, whom she dubs “Scrooge Nouveau.” As Atwood reads her story, the various subjects of the film join in and read Payback in their own language, bridging Atwood’s essay into a mission that is both personal and collective. Baichwal ends the film by turning the question of indebtedness back on the audience and asks the members to recognize their own implication in the cyclical ideology that perpetuates debt. If people made these systems, Baichwal’s threads suggest, they can also remove them. Just who pays back to whom, however, remains to be seen. Rather than offer an easy answer, Payback raises many difficult questions. It’s a relevant and thought-provoking essay.

Payback is currently playing in Ottawa at The Bytowne.

*Photos courtesy of the National Film Board of Canada. Photo of Conrad Black courtesy Jeffrey Salter.