Day 5 of Hot Docs began with a screening of The Imposter. The review can be found here. 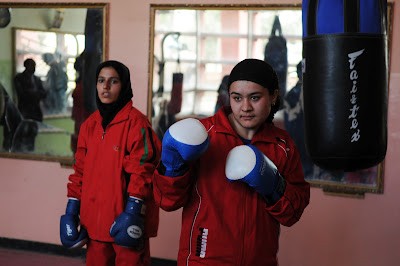 The Boxing Girls of Kabul is an inspiring story of three courageous girls in Afghanistan who fight for equal rights one punch at a time. In spite of the continued presence of a culture that places women in a submissive role, the three girls gain self-confidence and self-empowerment by training together in hopes of one day representing their country at the Olympics. Even though they cannot afford proper equipment (they don’t even have a ring), the girls work hard and train for competitions. Along with the help of their progressively-minded trainer, the girls demonstrate that women can succeed in roles presumed to be appropriate only for men.

There are still many dissenting voices nevertheless. One woman quips that boxing might render the girls unfit for marriage. “Who will want a daughter with a broken nose?” she asks. One scene shows the girls’ trainer accosted by a man who recognizes him from TV. Likewise, a brother of one of the girls explains that he wishes that the girls would not box because he fears that the attention brought to them might make them victims should Afghanistan see a reprisal from the Taliban. On the other hand, the girls mostly have the support of their parents, especially their fathers, who are proud to see their girls ushering in a voice that calls for change in Afghanistan. By training and representing their country through sport, the girls give hope for women in Afghanistan. The Boxing Girls of Kabul uses the boxers to show an internal struggle for change in a country that has long roots in a male-controlled culture.

At a quick fifty-two minutes, one wishes that the story might have gone elsewhere, but the film nevertheless extends the boxing matches outside the homes of the families and juxtaposes their training with scenes of violence against women. Side-by-side, the scenes reveal the urgency of the girls’ need to resist and fight back. Produced by The National Film Board of Canada and directed by Ariel Nasr, The Boxing Girls of Kabul is a well-done observation of how change begins at the personal level.

The Boxing Girls of Kabul is preceded by the short film Fire Academy (Dir. Kyle Power, Canada). Like Boxing Girls, Fire Academy shows two girls training in non-traditional roles. The girls want to become firefighters, and the film shows them undergo the grueling and strenuous training. Featuring some insightful comments within a mere ten minutes – not to mention some hilarious footage of a Full Metal Jacket-ish trainer – Fire Academy is an impressive first film.

The Boxing Girls of Kabul is available to rent or own from the National Film Board of Canada.

The Mystery of Mazo de la Roche
(Canada, 52 min.)
Dir. Maya Gallus
Another mid-length doc presented by the National Film Board of Canada (they co-produced this one), The Mystery of Mazo de la Roche is an intriguing look at one of Canada’s most prolific authors. Mazo de la Roche gained famed in the late 1920s for winning a major literary prize (with a then cash value of $10 000) for her novel Jalna. The novel propelled de la Roche to international stardom and made her the first major sensation for Canadian literature. (One of the talking heads refers to her as the Margaret Atwood of the Roaring Twenties.) She seems to have faded from contemporary readership nevertheless. Speaking as an avid reader of Can Lit, her name is certainly familiar to me, but her work rarely receives the same attention as Atwood, nor do her books appear on many syllabi for literature courses. It seems that Canada is forgetting one of its major literary voices.

de la Roche wrote a series of Jalna books, along with other novels and prose, yet The Mystery of Mazo de la Roche interrogates her most intriguing work: her autobiography. Using much of Mazo de la Roche’s own writing to serve as the narration, The Mystery of Mazo de la Roche offers some dramatic re-enactment to act as visuals. The film also offers some interviews with Mazo’s daughter, her daughter-in-law, some scholars, and other authors including Susan Swan (The Wives of Bath). The talking heads put an interesting spin on de la Roche’s story, saying that much of her autobiography is a fabrication. The film also explores her relationship with her cousin/adopted sister Caroline. The two lived together in a “Boston marriage” and Caroline often assisted Mazo in her writing, filling in the gaps when Mazo’s poor health made it difficult to write. Their daughter also testifies that Caroline often liked to fill out the documentation/records for Mazo and herself, showing off her own knack for fiction by making things up. This apparent gap created by the sketchy records and unreliable autobiography puts a fun spin on the dramatic scenes of the film. The Mystery of Mazo de la Roche shows that all Canada really seems to know about one of its early literary figures is her fiction.

The Mystery of Mazo de la Roche and The Fortune in the Throat screen again on Sunday, May 6th at the Cumberland at 4:30 pm. 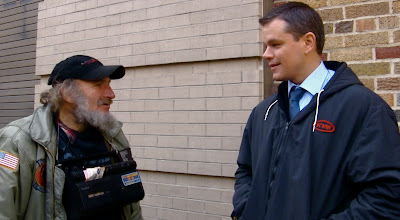 Radioman is a fun and surprising character study of one of the hardest working men in the movies. Radioman is described as a fixture of New York City. He bikes around the city with an array of shopping bags and a portable radio strapped around his neck. Any tourist or passerby might take him for a homeless man or an escapee from the nut house. Instead, Radioman is the go-to guy for what’s happening on New York movie sets. He knows which movies are filming where and who is on set at what time. He knows all the actors. He even knows a director named Marty. Radioman loves the movies, he explains, and the movies love him.

Although it’s a fairly rough production otherwise, Radioman offers a “who’s who” of Hollywood talent that describes their experiences with Radioman on set. The film features an unprecedented number of A-listers in one film. It includes interviews and sound-bites from stars like George Clooney, Meryl Streep, Matt Damon, Robin Williams, Tom Hanks, Sandra Bullock, Josh Brolin, Whoopi Goldberg, James Gandolfini, and Johnny Depp. Virtually every major Hollywood talent appears save for Brad and Angelina, but the film mentions Radio’s appearance at the premiere of Changeling, so one can assume that he knows them, too.

In addition to frequenting the sets out of interest and to get free lunch, Radioman has a roster of small appearances in the films as a background actor. He has performed in films like The Bourne Supremacy and Wall Street 2, often as a homeless man; he even has a speaking part in the Robert Pattinson film Remember Me and the occasional guest appearance on “30 Rock” as Moonvest. He is so high in demand in the pictures that Martin Scorsese (the aforementioned “Marty”) gives him a special part in Shutter Island for which Radio shaves off his signature beard.

As Radioman explains his love for the movies and his struggle to find a role in the industry, Radioman offers a fun story of rags-to-modest riches. Radio seems to have a difficult childhood and early life: he was homeless and battled with alcoholism. Now, though, he has a small place in Brooklyn and has been sober for fifteen years.

Although the film provides much of Radioman’s backstory along with ample footage that testifies to his status and novelty in the industry, it feels as if the film is holding back or is a bit too shy to interrogate the subject. One segment of the film, for example, sees Radioman rent a tuxedo and fly to Hollywood with hopes of attending the Oscars. He doesn’t get in to all the events or parties, nor does he see many of his celebrity friends. (He does, however, run into Cher.) But the film seems to be missing something in its portrayal of Radioman’s perception of himself within the industry. This quibble might be beside the point, since the film works well as a celebratory behind the scenes look at one man’s role in the movies.

For info, show times, and tickets please visit www.hotdocs.ca
***Note: star ratings will be assigned after the festival. (So check back next week to see how these films rank!)