(Finland, 81 min)
Dir. Katja Gauriloff
Ever wanted to know the origins of the food you eat? Well, now you can. Canned Dreams traces the journey of all the ingredients that go into making one can of ravioli. As far as documentaries about the food industry go, however, Canned Dreams is hardly Food Inc.

Canned Dreams a revealing, albeit heavy-handed, look at the workers behind the food-making process, but the film is hardly likely to change many eating habits since the argument is never really clear. Why match the voice over of a butcher who unrepentantly describes past acts of spousal abuse while he prepares a cow? Is it not gross rationalization to parallel the processing of food with domestic violence? Moreover, the film ignores the political economy of food production and consumption almost entirely, save for one sequence in which a Romanian slaughterhouse employee concedes that he must kill pigs in order to put food on the table for his family. Likewise, the film shows the absurdity of transporting ingredients from multiple countries and continents to one cannery in France, but it doesn’t offer anything as a solution. Canned Dreams might inspire practising members of the 100 km diet, but others might simply see the film as a missed opportunity to change the way we think about the food we eat. 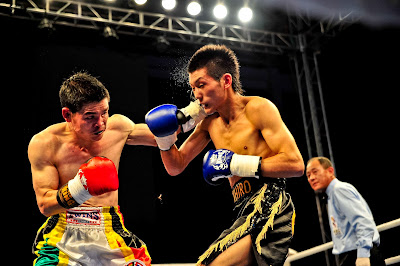 The film follows boxing coach Qi Moxiang as he recruits and trains boxers in China’s Sichuan province.  Using a detached, observational style, China Heavyweight carefully taps in to the drive to succeed by showing the strenuous mental and physical preparations that go into becoming a boxer. The film also contrasts the struggle for athletic glory with the fight for modernity. One of Moxiang’s boxers, for example, wants to leave his family’s tobacco farm in the province. The footage of his parents cultivating the crop posits their labour as offering a physical toll even greater than that of giving/receiving punches in the ring. The emotional pull between the lives of the parents and their son’s need to make his own mark in life is an intriguing bout.

China Heavyweight also features some top-notch tech work. The cinematography by Shaoguang Sun is intimate and gritty. (It looked even more superior to everything else at the festival being the only feature to screen on film so far, rather than as a digital projection.) The boxing scenes are also as well cut as those of a narrative feature. China Heavyweight is, above all, a human drama – it’s a well shot character study that shows how boxing is far more than sport.

Rating: ★★★½ (out of ★★★★★)
China Heavyweight screens again on Thursday, May 3rd at TIFF Bell Lightbox at 2pm and on Friday, May 4th at the Fox Theatre at 9 pm. It also opens theatrically on May 11th.

China Heavyweight opens in Ottawa at The Mayfair (Bank) on Friday, August 17.

Day 7 also featured a screening of We Are Wisconsin, which is reviewed here.