Hot Docs Day 7: We Are Wisconsin 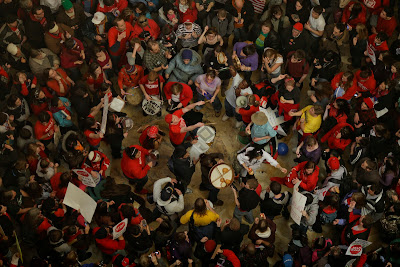 “This is what democracy looks like!” chants a crowd of protestors marching together at the Capitol Building of Madison, Wisconsin. The group is comprised primarily of public-service employees demonstrating their objection to the “Wisconsin Budget Repair Bill” (aka “The 2011 Wisconsin Act”) that was proposed by Wisconsin Governor Scott Walker. Walker’s Bill advised numerous amendments that would allegedly revamp Wisconsin’s budget; however, the Bill sought to do so at an expense of worker’s rights. Most problematic was the proposed amendment to limit collective bargaining, which would effectively end fifty years of progress made by workers who fought for their rights. Unwilling to let the Republican Governor take away their livelihood, the public took to the streets and marched to the Capitol to express their disapproval.

We are Wisconsin chronicles the efforts of the protestors to voice their concerns and express their democratic rights. The film follows six protestors from different walks of life as they band to gather an advocate for common goals: social worker Rachel Freidman; teacher Laura Glass; twenty-one year old student Kylie Christianson; registered nurse and union rep. Candice Owley; electrician Mark Roghen; and police officer Brian Austin. Austin’s participation is especially notable as Walker’s bill exempted police officers and fire fighters; however, these groups found the Governor’s proposal so egregious that they joined in the cause. These six individuals joined thousands of protestors in an occupation of the Capitol rotunda, unwilling to leave the building until the Governor heard their cause.

The occupation begins as a public hearing against the bill. As one concerned advocate explains, members of the public may testify as to why the Bill is undesirable. The Republicans want to close the meeting, but policy states that the hearing may continue so long as there are people wanting to speak. The groups then decided to camp out at the building in order to keep the hearing open. The hearing is eventually closed, but the public remains united and will not leave until the Bill is killed. They occupy the Capitol for eighteen days, giving voice to democracy and showing the imbalance of power symbolized in Walker’s actions with the Bill.

We Are Wisconsin treats the story of the occupiers quite fairly. Using titles that state little more than dates and basic facts, director Amie Williams allows her subjects to tell the story for themselves, which puts a human face on the infringements encouraged by Walker’s Bill. The film also provides them a forum that the state sought to close. The film outlines their objections to the Bill quite clearly and shows that the workers were willing to grant some concessions even before the Bill was proposed; likewise, Williams gives Members of the Right a voice in the film by including words and actions that they used in public, such as Walker’s comments on TV or the snippets of talking heads on the news that sought to tell a very different story. Some of the pundits liken the activity of the protestors to the Arab Spring movement in Cairo, thus using sensational rhetoric to obscure the point. (Someone should tell them to catch a screening of Shadows of Liberty if they’re in town for Hot Docs.)

The reference to Arab Spring might be hyperbole, but the film certainly encapsulates a relevant political movement. The actions of the protestors arguably suggest a precursor to the movements of Occupy Wall Street, or the fight of the 99 against the 1%. We Are Wisconsin captures American in the moment, showing a growing unease of the public in light of the wake of backwards conservatism that is spreading across North America. The film offers a passionate, active voice for democracy, and provides a morale that extends beyond union contracts and into universal questions of basic rights.

The interactive, community-based feel of We Are Wisconsin gives it much of its dramatic heft. Williams allows her subjects do the talking and she allows the image of tens of thousands of bodies marching together to create an argument far more powerful than voice-over could ever achieve. Williams also situates the story within the legacy of American democracy through some effective song choices. Most notable is the inclusion of Florence Reece’s anthem of solidarity “Which Side Are You On?” which appears in a cover by Ryan Bingham. Doc fans will certainly remember the iconic image of Reece singing in support of the coal miners in their strike documented in Barbara Koppel’s 1976 film Harlan County U.S.A. As with its processor, Wisconsin is highly entertaining, but mostly for the passion of its subjects, rather than for its antagonistic portrayal of Scott Walker (whom the occupy movement is in the process of having overturned as Governor). We Are Wisconsin might be the next Harlan County U.S.A with how it conveys the fight of the strikers with such clarity and passion. The politics and conviction of the film are clear and, as such, are equally persuasive.

This is what documentary filmmaking is all about. One of the strongest films to screen at Hot Docs so far, We Are Wisconsin received the first standing ovation I’ve seen at the festival this year. The crowd at the film’s world premiere at the Isabel Bader theatre brought the house down with passionate applause, and the film is likely to inspire such a reception in future screenings. Even the most conservative of viewers could be compelled by the stories told in We Are Wisconsin – this is a provocative, convincing story about the power of democracy and what every individual can do to effect change. Somebody, please send a screener of the film to Stephen Harper.

Update (6/8/2012): We Are Wisconsin is now available on DVD or digital download at  http://wearewisconsinthefilm.com.

For more information on the participants and to learn how to get involved, please visit www.wearewisconsinthefilm.com