Legend of a Warrior 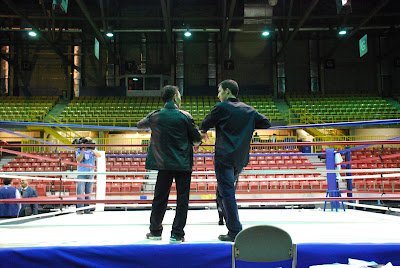 Who knew that kung fu could be so poignant? Legend of a Warrior is a surprisingly candid story of the bond between father and son. Estranged with his father for many years, filmmaker Corey Lee decides to repair their relationship and forgive what has passed. Corey’s father, Frank Lee, is a world-famous kung fu coach. As Corey explains, Frank was absent throughout Corey’s childhood as he was always nurturing his fighters, rather than his children. Corey decides to make amends with Frank in his own arena: the ring. Corey becomes Frank’s pupil, and his father teaches him the martial arts techniques that he learned as a boy, but has since forgotten.

When Corey begins the project, Frank seems a bit uncomfortable with his son. The distance between the two is tangible, with Frank keeping the relationship to warm-ups and stretching, and with Corey using the name “Frank” while describing their story, rather than the more familial “dad” or “father”. As the training progresses, the father and son make a gradual transition in their relationship. They begin working closely together and keep their relationship restricted to refining physique and technique, but as their training continues, their relationship becomes increasingly intimate with Frank gradually resuming the role of father instead of trainer.

The most surprising revelation of Legend of a Warrior is not the film’s transformative effect on Corey, but the profound change one sees in Frank. Throughout the film, Lee shows the legacy of his father’s career by providing archival footage of some of Frank’s greatest accomplishments and his most triumphant students. The film also uses some funky comic book-style animation to provide Frank’s backstory as Corey describes his father’s early years in China and Hong Kong. Growing up during the reign of Chairman Mao and the Chinese Communist Revolutionary, Frank learned to be strong in order to survive. Before the Lee family fled to Canada, Frank’s mother implored her son to learn martial arts. Like the most fantastic of superheroes, Frank refined his technique, arose from a tough situation and used his skills to better the lives of others.

Although he seems like a crusty old trainer akin to Clint Eastwood in Million Dollar Baby, Frank’s pupils tell of a man who is sensitive and fully away of the consequences that his career had on his personal and family life. As Frank explains to Corey the choices he made in order to best provide for his family, the tough trainer drops his fists and reveals the emotional burden of which his son was unaware. Frank’s confession offers a climax that is extremely emotional and personal, but it makes the weight of Corey’s journey fully accessible.

As Corey explains to his five-year-old son in the film’s opening scene, Corey is half-Chinese, half-Caucasian. Corey’s son is a quarter-Chinese, and Corey explains that a significant part of their family’s heritage is slowly whittling away with each generation. Corey’s attempt to rekindle his relationship with his father therefore has much more at stake. Besides the personal bond, Corey must reconnect with his father so that the newest generation of the Lee family can know its roots.

Legend of a Warrior is an affective story of revisiting the past in order to make sense of the present. Lee handles his family drama commendably and finds the necessary catharsis for his story while avoiding the pitfalls of sentimentality. Much like the other Canuck offerings at this year’s Hot Docs festival that show dramatic change through sport, Legend of a Warrior extends the story beyond the ring and shows how training and preparation develop greater aspects of character. Legend of a Warrior, though, packs a bigger punch by avoiding a climactic round in the ring altogether and by keeping the match between father and son. By offering such a personal journey, Legend of a Warrior excels because it knows that the greatest challenge is not the sport itself.

Screens again Friday, May 4th at the Isabel Bader at 4pm.

For more info on films, show times, and tickets, please visit hotdocs.ca
***Note: star ratings will be assigned after the festival. (So check back next week to see how this film ranks!)