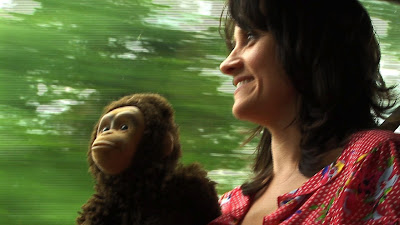 A funny piece of DIY filmmaking, comedian/ventriloquist Nina Conti puts herself as the centre of her own film when she finds her life at a crossroads. Conti has reached the tender age of twenty-six and she’s not sure how much longer she can continue a career that relies on gigs and puppets. Almost as an act of fate, however, Conti’s friend and mentor Ken Campbell passes away and leaves all his puppets and ventriloquist tools to Nina. Nina therefore decides to honour Ken’s legacy and bequeath one of his famous puppets to Vent Haven, which is a sort of museum/mausoleum for ventriloquist puppets in Kentucky.

Nina ships off from London to some derelict motor inn in the Bluegrass state. Nina arms herself with a legion of Ken’s bereaved puppets and voices her own distress, anxiety, and aimlessness through the mouths of an owl, a bulldog, and a little old lady who resembles Gertrude Stein. Nina’s most frequent narrator in the film is her own puppeterial alter-ego named Monkey.  It’s consistently hilarious to watch Monkey explain the situation from the left hand side of the frame while Nina holds the camera with her right.

Monkey and Nina use Nina’s self-doubts to explore ventriloquism as a lost art form. They interview dozens of fellow ventriloquists (the entombment of Ken’s puppet coincides with the annual ventriloquists convention in Kentucky) and show how so many people find comfort and confidence by sticking their hands up their arse of a little animal and expressing themselves through misdirection and self-deprecating humour.

Her Master’s Voice is a strange little ditty about the artistic process and self-discovery. As Nina lies awake in her ramshackle room and converses with herself via puppets, the film shows an artist ready to walk away from a career at which she is clearly talented. Nina’s conversations, especially with Monkey, acknowledge Ken’s teaching by embodying his lesson that the line between creativity and insanity is a fine one. (But Monkey seems to have it all together.)

Moreover, the film features some hilarious set pieces, including Nina’s stand-up routine with Monkey at the convention. The highlight of the film, though, might be the hysterical sequence in which Nina stages the death of Monkey to gain a sense of what life might be like without him. As Nina shows through her journey of paying tribute to her mentor, the world of comedy would be at great loss without this funny little monkey.

Smoke Traders is a revealing study of the struggles of aboriginal people for their sovereign rights in Canada. The film uses the case of the Mohawk tribe’s cigarette trade to show the tribe work to reclaim what is rightfully theirs. The film also challenges the murky federal/provincial laws that prevent the tribe from greater success. By following a handful of subjects with a stake in the tobacco trade, Smoke Traders explores the levels of production and distribution to show how the trade greatly enriches the lives of the Mohawk and their community. The subjects in the film suggest that the trade helps lessen the percentage of their people on welfare, and they show that the funds are channelled into programs that serve the community, such as sports teams and programs for the arts.

The subjects also convey the risk that goes into said trade. The federal government consistently cracks down upon the smoke traders because of taxation. As one cigarette manufacturer explains, it’s fair for the Canadian government to want a cut of the trade because the Mohawk sell to Canadians both indigenous and non. The issue becomes complicated when provincial authorities try to intervene, since the subjects are less inclined to acknowledge provincial law or taxation.

Smoke Traders also shows that the smoke trade affords a viable option for the tribes because the Canadian government resists developing alternative options. The film follows one smoke trader named Brian as he tries to leave the lucrative business so that his kids can have a father who is more stable and less likely to be harmed on the job. Brian decides to harness the power of the sun and go into business making solar panels. Brian saves his money and researches the plan, and takes the necessary steps to start a project that will provide work for his community; however, he receives no assistance from the government, and finds himself stalled in red tape while help goes elsewhere. By combining Brian’s story with that of the cigarette trade, Smoke Traders offers an unflattering portrait of the Canadian government neglecting to help its own people for fear that it might set a precedent and acknowledge the sovereignty of aboriginal persons and their right to conduct their own business. At fifty-one minutes, the film should play well on the small screen, so perhaps the wider audience afforded by television might help bring this important story more attention.

Smoke Traders screens with Pot Country (USA, 27 min.), which is directed by Mario Furloni and Kate Maclean. Pot Country depicts a smoke trade south of the border and questions the necessity to decriminalize cannabis. The film focuses on small scale farmers who express that the legalization of marijuana might help erase some of the unnecessary stigma associated with the trade, or the uncertainty that comes with harvesting an illegal product. Like Smoke Traders, Pot Country uses the inconsistency between state law and federal law to show how ambiguous legislation does little to help the matter. Pot Traders, though, best shows how the decriminalization of marijuana risks terminating the livelihood of the small businesses, since Big Business will clearly step in on such a profitable product if regulation passes. It’s a story that extends beyond the legal/moral question of marijuana into larger questions of commerce and trade.