In the Shadows of Twilight 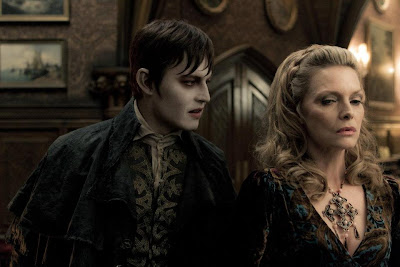 Ah, vampiric love. The romance of the ill-fated night creature has been a running joy in horror films. Dracula loved Mina, Nosferatu liked Ellen, and Edward Cullen pined over Bella Swan. It’s true that the vampire film has descended from gothic unrequited love to emo-vacant-eyed staring, but star-crossed romance nevertheless continues to be the blood of the vampire movie.


Dark Shadows rejects the teeny-bop sap of Twilight and gets back to the roots of the genre. It’s more in the vein of old-school Dracula stuff, so even though the ill-fated love triangle in Dark Shadows still dots the I in “vampire” with a little love-struck heart, it drives a stake through it, too, just to give the audience something new. Sort of. 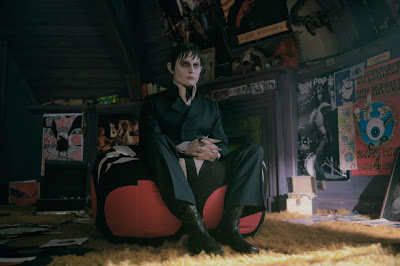 Adapted from the gothic soap of the same name that ran during the 60s and 70s, Dark Shadows stars Johnny Depp as Barnabas Collins, a wealthy fish baron who is turned into a vampire when he spurns the love of a witch named Angelique (Eva Green). Angelique is one green-eyed monster and she decides that if she can’t have Barnabas, nobody can; therefore, she turns Barnabas into a vampire, offs his girlfriend, and buries him in the ground for two-hundred years. It seems that Angelique likes playing hard to get.

Barnabas awakens circa 1970 and discovers that his town of Collinsport, Maine, has rather changed. He finds his way back to the Collins Manor, though, and befriends the remaining Collins family that still dwells within the decaying estate. The manor is currently presided over by the ghostly Elizabeth Collins (Michelle Pfeiffer in a most welcome reteaming with director Tim Burton after Batman Returns) and she and Barnabas strike a pact that the resurrected Collins may abide in the family home so long as he shares the family riches and promises not to bleed them dry. Along with Elizabeth, the Collins family has been reduced to her daughter, Carolyn (Chloë Grace Moretz of Hugo fame), her brother Roger (Johnny Lee Miller, who seems to be in the film for no apparent reason), Roger’s oddball son David (Gully McGrath) and the family’s resident psychologist/nut-job, Dr. Hoffman (a fun and boozy Helena Bonham Carter). Also joining the party is David’s new governess Victoria Winters (Bella Heathcote), who bears a striking resemblance to the fair maiden that was lost to Angelique’s spell some two-hundred years ago.

Barnabas immediately swoons for Victoria. In this sense, Depp is basically playing Edward Cullen by way of Jack Sparrow, except that the pirate’s drunken surliness is traded for some oft-humorous formal diction. Not that this is a bad thing – I’d take a woozy Keith Richards-ish vampire over Pattinson’s lame emo boy anyway. Depp’s Barnabas is great fun, though, as he leads the Collins family to reclaim their fortune in the small fishing village that was named in their honour. 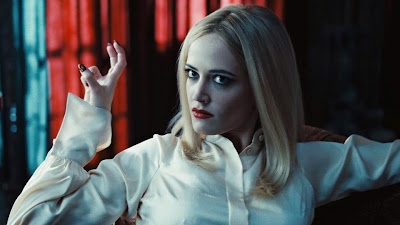 Naturally, fate casts a poor spell on Barnabas’s return once the bodies start piling up. (He is a vampire, after all, and it seems that even a small town in Maine will not overlook the absence of a busload of doped-up hippies.) Angelique, now renamed Angel Bell, has overtaken the Collins family empire and revamps her ire/passion once she learns of Barnabas’s return. As Angelique aches for old Barny, she takes on a warped Bella Swan complex: Even though Green’s spirited (if slightly all over the map) play is much livelier/sexier than the wan lover of Twilight fame, Dark Shadows proves that romantic pining has become the substance of vampire films.

Dark Shadows is mostly good fun nevertheless. It’s a mixed bag of gothic send-ups along with the usual time-travel gags. “We don’t use horses,” Elizabeth dryly informs Barnabas, “we have a Chevy.” There’s also some clever humour with Barnabas’s stiff 1700-era diction and social mores, which includes a funny scene about Alice Cooper being the ugliest woman he’s ever seen. The film is also a sumptuous visual feast, with Burton’s atmosphere strongly in tact after being far too over the top in recent films like Alice in Wonderland. The look is still a bit too overpowering, but things are substantially reigned in this time around. Colleen Atwood’s costumes, for example, really add a spot of fun to Dark Shadows with their mix of Addams Family values and Brady Bunch chic. (Helena Bonham Carter rocks the groovy seventies garb especially well.) 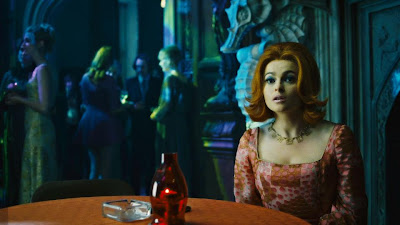 It’s disappointing, though, that Dark Shadows doesn’t work better since the gothic kookiness of the source material seems right up Burton’s alley. There are simply too many characters, storylines, and subplots, which might stem partly from a desire to cram too much of the source material into one feature film. Everything crumbles by the midpoint of Dark Shadows, with some stories, such as Victoria’s haunting, becoming all but forgotten until they reappear an hour later.

The cast mostly keeps it afloat, though, with Depp and Green clearly having lots of fun. Pfeiffer and Bonham Carter work wonders with the deadpan humour of the film, although both actresses aren’t given nearly enough screentime. Moretz, on the other hand, looks like she is working overtime to elude more sex appeal than necessary for a fourteen year old and also makes a visibly effort to upstage everyone else in the cast. (It’s a testament to Pfeiffer’s timeless skill that she does both effortlessly in her role as Carolyn’s mother.) Dark Shadows is simply too unfocused, though, for the efforts of the cast to give any synergy to the material.

After the misfire of Sweeney Todd and the garish train wreck of Alice in Wonderland, Dark Shadows represents a minor comeback for Tim Burton. It looks great, but almost all the faults lie in the meandering, if not bloodless script. It’s more fun than a night spent with Edward and Bella, but the gothic romance still needs to be revamped.