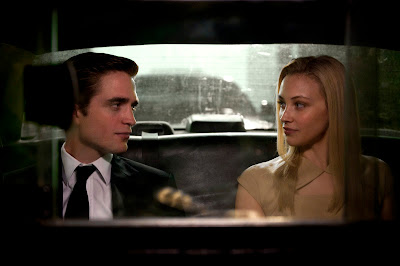 “A rat became the unit of currency.”
-Zbigniew Herbert.

David Cronenberg smells a rat. Its name is Capitalism. The rat, as the epitaph that opens both the novel and film adaptation of Cosmopolis suggests, is the new unit of currency. Capitalism, aka the rat, thrives on currency, on trade, and commerce. It also breeds rats. It’s a self-fueling machine; however, as rats proved as the unit of trade during the Black Death, all such currency has an inevitable downturn. So, too, does Capitalism. As Cronenberg suggests in beautifully cerebral film Cosmopolis, Capitalism is the vile rat of the new millennium and its day has come. 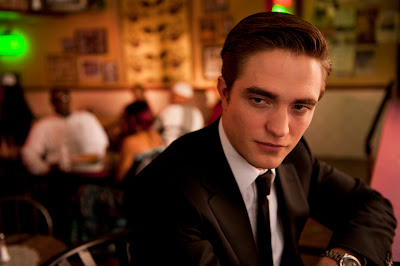 Capitalism lives and breathes in Eric Packer, the twenty-eight year-old multi-billionaire financial tycoon played by Robert Pattinson. The epitome of Big Business, Eric spends the duration of Cosmopolis on a fateful ride in his massive stretch limo through the streets of New York, or rather Toronto transformed into the Big Apple via license plates and green screens – it’s a Cronenberg film, after all. Eric wants a haircut, but as his bodyguard/chaperone Torval (Kevin Durand, Edwin Boyd) informs him, today isn’t really a good day to drive across town for a simple haircut, for The President is in town and thus the streets will be a gridlock of chaos.

Persistent in his wants and desires, though, Eric insists on the haircut. The haircut is a curious motivator for the protagonist drone of Cosmopolis. Eric is impeccably suited and coiffed when he starts his day and makes the blunt declaration that he wants a haircut: Eric simply has no need to visit the barber. His hair is already short and styled in a Don Draper-ly look for the new millennium. Eric’s haircut is perhaps a symptom of his capitalist urges. As a man who has everything and needs little, Eric can simply afford to waste such an important day on such a frivolous endeavour. To underscore Eric’s empty existence, Cronenberg repeatedly offers a glimpse of the head of Packer Capital as he sits alone in his cavernous limo en route to get his haircut.  The limo is also well insulated with cork to block out the intrusion of life on the streets. 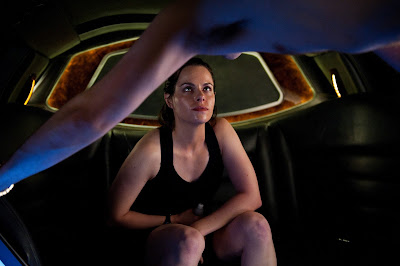 Eric’s day is not completely wasted on his ’do, though, since a roster of his minions is summoned to the travelling office, which is equipped with a minibar, new age computers, and a toilet.  Eric’s ride across New York City consists of various episodes in which he deals with his security adviser, Shiner (Jay Baruchel); his mistress, Didi (Juliette Binoche); his financial advisor, Jane (Emily Hampshire); and his doctor who administers a rectal examine and ominously informs Eric that his prostate is asymmetrical. During all these conversations, Eric and company make heavy conversation and debate the future. Of particular concern to Eric is the potential downfall of his company that rests on the Chinese Yuan. The Yuan is the unknown variable that threatens Eric’s demise. The Yuan is also one of the few changes that Cronenberg makes in his adaptation of the novel by Don DeLillo: in the book, Eric’s financial collapse rests on the Yen, but the switch to China as the mysterious factor gives Cosmopolis an added resonance since the secretive country enjoys a similar peculiarity in today’s global economy.

Cosmopolis also has an ongoing sense of impending doom with the repeated threats made against Eric’s life. Torval frequently intrudes Eric’s privacy to inform him of some level of threat. The ride is also interrupted by raging anarchists, anti-capitalist protestors, and one well-aimed lemon meringue pie.
There is, however, a bit of hope that arises during the many stops that Eric makes en route to the barber. Eric’s trip enjoys a surprising number of intersections with his wife, Elise (nicely played by Canadian actress Sarah Gadon who reteams with Cronenberg after A Dangerous Method). Like Eric, Elise is extravagantly wealthy; however, unlike Eric, she inherited the money and thus has not become corrupted by pursuing a life that generates wealth for its own sake. Although Elise also talks like a lobotomized lab rat, she fills herself with passion for the arts. An avid poet, Elise frequents bookstores and plays. She also shows an appreciation for the finer things during her encounters with Eric. For example, she wants duck consommé for lunch, but she can’t bring herself to eat it, whereas Eric hungrily devours four meals during the day. He also pursues Elise for sex without end. 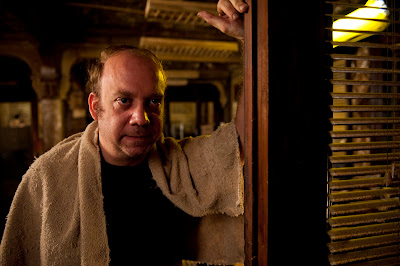 It is the omission of the consummation between husband and wife where Cronenberg makes his most radical change – and improvement – to DeLillo’s novel. The book Cosmopolis winds down with Eric finding some hope for the future or, at the very least, making a symbolic act of atonement to wipe clean his carnivorous destruction of others. The film, however, is darker and more cynical, and it culminates with Eric going to meet his maker, the volatile Benno Levin (played in an exhilaratingly madcap performance by Paul Giamatti) who shares Eric’s deadly obsession with the game of finance. (In this case the Baht.) Eric’s confrontation with Benno is a great tour-de-force for Pattinson and Giamatti in which Eric must finally face up to the consequences of capitalism.

Pattinson makes an impressive career move as the laconic Eric Packer. Even though the steely tycoon speaks in the expressionless monotone of Edward Cullen, Pattinson gives the character a sense of removal that makes the whole film work. Cosmopolis might be Cronenberg’s most dialogue-heavy film yet, but Pattinson’s dry delivery of the emotionally vacant script brings the film to life. As played by Pattinson, Eric Packer is a hollow empty shell of a man with which to serve a healthy dose of Cronenbergian allegory. It’s often said that casting is 90% of directing, and Cronenberg certainly lands an A with this pleasant surprise.

As with every Cronenberg film or any film that demands attention and contemplation, Cosmopolis is of the ‘love it or hate it’ variety. Marking his first time as both writer and director since 1999’s eXistenZ, Cronenberg is back in the realm of cyber-psycho-sexual mind games in which he produces his best work. Cronenberg again works with some of his frequent collaborators including cinematographer Peter Suschitzky who gives a slick and intriguingly distorted portrait of the new millennium. Cosmopolis also features strong work by regular Cronenberg teammate Howard Shore who provides the music along with Metric and drives the film in a series of electro-pop crescendos à la Run Lola Run. Cosmopolis is best, though, as a piece of Cronenberg adaptation. Cosmopolis offers a strong vehicle for the director’s existential contemplation. The result is a dark and damning portrait of capitalism on its all-consuming ride to nowhere.

Cosmopolis is currently playing in wide release in Canada.
It opens in Ottawa July 6 at The Bytowne