"I'm awfully sorry. I didn't mean to frighten you."

Snow White and the Huntsman 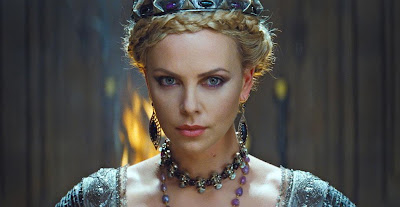 The second adaptation of Snow White and the Seven Dwarfs to hit theatres in 2012 (after the Julia Roberts farce Mirror Mirror, which I’ll admit I didn’t see), Snow White and the Huntsman is a darker, more contemporary revamp of the classic story. This is Snow White by way of The Lord of the Rings with a detour through Game of Thrones. The story of the girl who is saved by true love’s kiss benefits from a modern sensibility that teaches girls not to be damsels in distress; it also benefits from the keen eye of a producer who aims for the wide audience of gender neutrality. A screening of Snow White and the Huntsman boasts a bipolar lineup of previews, going from The Katy Perry movie to The Bourne Legacy to Les Misérables to Ice Age 4. This film is clearly a difficult sell when it comes to marketing. It’s more of an action movie than a fairy tale, so SWATH might appeal more to male audiences that may not be keen on convincing their buds to buy a ticket to see Snow White.

As with the fairy tale, this Snow White begins with the rise of Queen Ravenna (played by a deliciously evil Charlize Theron) who stages a coup on an ill-fated kingdom. Ravenna stays strong by sucking the life from the female peasants. Ravenna’s power, the film explains, comes from a spell posed by her mother. Ravenna’s mother ensured that her daughter’s beauty would always protect her; however, as many an aged actress knows, the splendour of youth is not eternal.
Boldly standing before her golden mirror and allowing wrinkles to blemish her pristine face, Theron is the epitome of black hearted beauty as she vainly asks, “Mirror, mirror, on the wall, who’s the fairest of them all?” In a way, Ravenna is much like Theron’s Mavis, the black-hearted Barbie of Young Adult: both are blonde beauties, both are dead on the inside, and both have the ability to cast a woozy spell over men. Neither one is willing to grow old. The only difference is that Ravenna arms herself medieval weapons, a bathtub of milk and an army of evil crows, while Mavis equips herself with a Blackberry, a Diet Coke, and a toy dog.

A wrathful queen, Ravenna seeks the heart of her imprisoned step-daughter Snow White (played by Kristen Stewart) when the mirror deems the girl fairest of them all. Although dubbing Kristen Stewart as prettier than Charlize Theron is a minor plot hole, Snow White and the Huntsman is an otherwise inspired adaptation of the fairy tale. Snow White escapes the Queen’s evil clutches, but she is pursued by an army lead by a sturdy huntsman who can navigate the mythical forests that surround the kingdom. The Huntsman is played by Chris Hemsworth, who trades Thor’s hammer for a medieval axe. With The Avengers and Cabin in the Woods already out this summer, Hemsworth continues a good streak in the action star/heart throb role.

Even though the huntsman is the more visibly robust soldier forging through the Black Forest, the story is ultimately a new age tale of girl power with Snow White learning to stand up and lead her people to reclaim the kingdom. Snow White and the Huntsman features none of the petty swooning of the Disney days. Snow White never cleans for the dwarves, nor does she summon the woodland creatures with charm. Instead, Snow White is more warrior than princess. Kristen Stewart plays the title heroine with spunky conviction and she shows that she can easily sustain a career post-Twilight.

Since Snow White and the Huntsman forgoes the route of merry sunshine, it might have been even better had it been darker and even more sinister. Or had it just granted more screen time to Charlize Theron. There is a sense of restraint to the production, which is perhaps inevitable given the audience demand that is required to recoup the costs of such an epic undertaking. Still, though, this is one of the better interpretations of classic lore of late, thanks primarily to the stunning and meticulous work from the arts, crafts, and tech departments, especially costume designer Colleen Atwood. The film provides some great action scenes and set-pieces, too, so the aim at wide appeal works surprisingly well. This is one summer movie that can be enjoyed by Snow White and the Huntsman alike.

Snow White and the Huntsman is currently playing in wide release.