Nothing But a Good Time 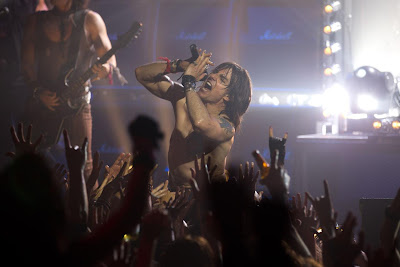 A whopping heat wave is spreading across the land. It’s hot enough to fry an egg on the sidewalk (but given the humidity, it might boil faster), so the air-conditioned multiplex is the place to be. Moreover, just when one is sweating for escapism, Rock of Ages brings harmless, groovy, family-friendly fun to the big screen. This new musical by Adam Shankman (Hairspray) is a welcome respite in a season that’s been serving mostly dark meat, and while Rock of Ages might not be the year’s most substantial film– if your favourite musical is Une femme est une femme then this film probably isn’t for you – it provides just the right thing for anyone looking to beat the heat and have a good time. Rock of Ages is simply two hours of toe-tapping, fist-pumping, dance-in-your-seat fun. 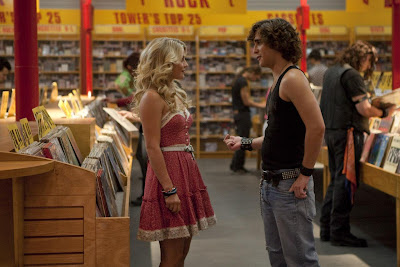 The film is based on the hit Broadway musical that sees Sherrie Christian (Julianne Hough from “Dancing with the Stars” and the Footloose remake) roll into Hollywood with dreams of being a singer. She’s just a small town girl living in a lonely world until she meets Drew (Diego Boneta, Mean Girls 2) who is also an aspiring singer. Drew also happens to work at the Strip’s popular rock venue The Bourbon Room, so he gets Sherrie a waitressing job from the bar’s owner/manager pair, Dennis (Alec Baldwin, who actually sings fairly well) and Lonny (Russell Brand). Baldwin and Brand almost steal the show as the fun Tweedledee and Tweedledum buffoons who run The Bourbon Room. 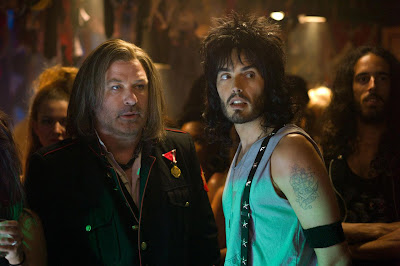 At the same time that Drew and Sherrie are using The Bourbon Room to get their big shot, others are trying to shut the place down. This mission is led by the Mayor’s wife, a Tipper Gore-esque moralizer named Patricia Whitmore, played Catherine Zeta-Jones, who is clearly having a riot as a ballbreaker with shoulder pads). Patricia thinks that sex, drugs, and rock-n-roll are a plague against America. There are two main targets to her campaign: The Bourbon Room, since it’s the hotspot of Eighties’ euphoria, and Stacee Jaxx, the heartthrob rocker played by Tom Cruise, who just happens to be headed for his last concert at The Bourbon Room before launching a solo career.

Cruise performs well as the show’s central rocker. He is a long way from his days of dancing in his underwear in Risky Business, but he still has a flair for the old time rock and roll and channels a few of the era’s biggest stars while offering some very good vocals. He also plays Stacee Jaxx a little à la Frank T.J. Mackey with a little bit of Joaquin Phoenix weirdness. Most of Stacee’s story figures around an interview with a Rolling Stone reporter played by Malin Ackerman (another surprisingly good vocalist), which prompts him to get his career back on track after it was marred by his sleazebag manager Paul (amicably played by Paul Giamatti, although he sings only slighter better than Pierce Brosnan). Paul is now to setting his sights on Drew as his next big star. As did Stacee, it looks like Drew will have to choose between love and fame. 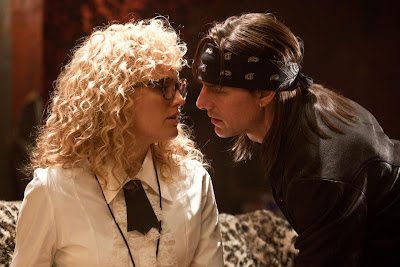 Boneta doesn’t fair as well as Cruise does, although he ranks among the film’s better vocalists. Hough, however, has considerable screen presence to carry the musical numbers and the dramatic interludes of the film. Best among those are her scenes with Mary J. Blige’s strip club songstress, whose powerful voice eclipses many of the singers in the film.

The star-crossed lovers scenario of Rock of Ages might not be anything new, nor is the Burlesque-y plot about saving a nightclub, but the film provides a fun romp of nostalgia for rock fans or a crash course in eighties hits for freshmen. Rock of Ages tells its story with an amiable mash-up of some of the greatest hits of the 1980s. This is truly an ‘all-singing, all-dancing’ breed of musical, with fairly little of the film advanced by dialogue and the majority of the plot moved forward by spirited Glee-ish covers of the hit songs. There might be one power-ballad too may within the playlist, but Rock of Ages is a love-story as much as it is a tribute to the heyday of rock and roll. The number of slower songs balances the film, too, since the numbers that are more upbeat find some difficulty in providing big showstopping sequences that are usually the centrepieces of musicals, such as the “Cell Block Tango” in Chicago or “You Can’t Stop the Beat in Hairspray.

The choreography by Mia Michaels (“So You Think You Can Dance”) fares pretty well, though, especially if one considers that the relatively simple structure of glam rock was popularized for head banging and for easy two-step dances by drunken white guys. Much of the songs in Rock of Ages work, however, because they embrace the fun, silliness, and excess of the eighties. Among the highlights of the film are the hilarious love ballad spoof of Reo Speedwagon’s “Can’t Fight This Feeling” as sung by Baldwin and Brand, a lively all-cast rendition of Journey’s “Any Way You Want It,” and the response/refrain duel of “We’re Not Gonna Take It”/“We Built This City” headlined by Zeta-Jones and Brand that brings the film to its fateful showdown. 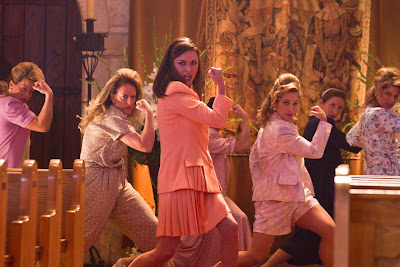 One can’t help but wonder what Julie Taymor might have done with this rock musical in terms of taking the music a step further and exploring the time from which it emerged (re: Across the Universe), but Shankman nevertheless captures the fun sex, drugs, and rock-n-roll character of the eighties. (Except for the drugs – this is a family film, after all.) For example, Rock of Ages takes a fun shot at the hypocrisy of Regan-era conservatism and of the Christian Right with Catherine Zeta-Jones’s spirited head-lining of “Hit Me with Your Best Shot that includes some fun intercuts to the Mayor (Bryan Cranston) getting slapped in the rectory while his wife dances in the pews. With campy, silly numbers like this one, Rock of Ages unabashedly channels the vibe of rock-and-roll that simply asks fans to rock out and have a good time. Rock of Ages is exactly that: a good time. It’s so much fun that members of the audience should wave their iPhones and demand an encore.