To Be a Kid Again 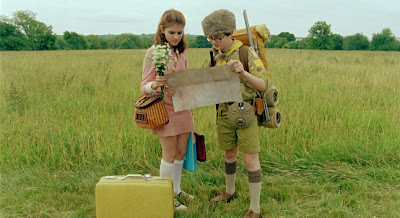 It looks like Wes Anderson has found his niche. Moonrise Kingdom, which might one day be seen as the exemplary Wes Anderson film, makes a strong follow-up production to 2009’s Fantastic Mr. Fox. Fox is an animated fairy-tale based on a story by Roald Dahl, aka the master of children’s lit. Moonrise Kingdom, on the other hand, takes Anderson back to his live-action roots, but Moonrise still has the fanciful whimsy that makes Fox such a charmer. An enchanting tale of child’s play, Moonrise Kingdom magically captures the joy and innocence of childhood. 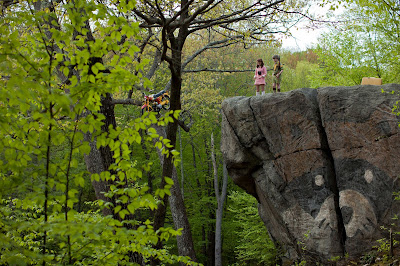 Set in the carefree days of 1965 (for no apparent reason, unless the story coincides with America’s loss of innocence circa Vietnam), Sam (Jared Gilman) and Suzy (Kara Hayward) are two New Englanders caught in throes of young love one fateful summer. After meeting the year before, Sam and Suzy became lovers by proxy and created a long-distance relationship via paper and pencil. They did it the old fashioned way, one could say. Time comes for them to reunite when Sam sends Suzy a fateful epistle that asks her to run away with him. Where they’re going and how they’ll survive remains to be seen, but all they know is that love will lead them somewhere special.

Although Suzy is improperly packed for the great outdoors (she brings a record player and a kitten), Sam is good at survival and can wrangle up a rustic and romantic living situation. Sam is well prepared thanks to his days as a Khaki Scout. In fact, Sam is in the midst of fine tuning his scouting skills during the summer camp at Camp Ivanhoe. It is only when Scout Master Ward (Edward Norton) realizes that Sam has flown the coop does anyone realize that the kids are missing. Suzy’s parents, played by Frances McDormand and Anderson staple Bill Murray, don’t detect a thing. Suzy’s parents receive the news from the local policeman, Captain Sharp (Bruce Willis, who performs quite well playing against type), who takes an interest in Sam and a shine to Suzy’s mother. 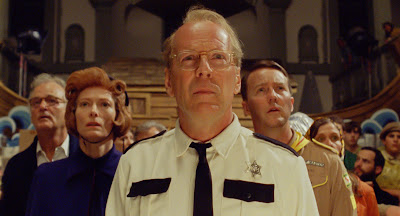 As  Captain, Scout Master, and parents embark to find the kids in the expansive wilderness, Moonrise Kingdom creates an entrancing fable about the things that parents don’t know about their children and the secrets that kids don’t know about their leaders. Despite the great work by the A-level talent playing the elder members of Moonrise Kingdom (including Tilda Swinton in a wonderfully dowdy appearance as a character who goes by the name of Social Services and speaks of herself in the third person), the stars of the film are the kids themselves. Gilman and Hayward are utterly delightful as the young Sam and Suzy. Their natural, innocuous charm works perfectly with the playful tone of Anderson’s Harold and Maude-type story of lovers on the lam. They’re clearly having a ball (as are all the other kids in the film) and their tangible, innocent energy beautifully evokes the sense of being a kid and of embracing the adventure posed by a life free of consequence. (Or so it seems.) 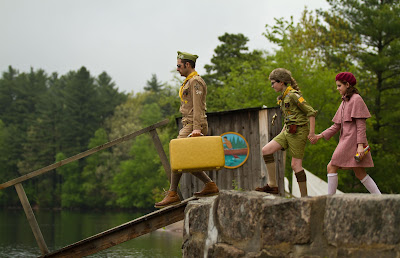 The story of child’s play in Moonrise Kingdom provides the perfect fit for Anderson’s unique, quirky style. Set to the bombastic kettle drums of the score by Alexandre Desplat, Moonrise Kingdom is an unabashed celebration of the age of innocence. There’s always been something childlike about the colourful whimsy of his earlier works like Rushmore and The Royal Tenembaums, and both films feature characters that choose arrested development in lieu of abandoning their youth. Moonrise Kingdom, however, works at a higher level because the look, tone, and pace of Anderson’s style are impeccably tailored for an adult’s nostalgia for lost youth. Moonrise Kingdom lets viewers experience the joy of being a kid all over again.

Moonrise Kingdom is currently playing at the Varsity Cinema in Toronto.
It expands June 15.