Where Did We Go Wrong?

Where Do We Go Now? 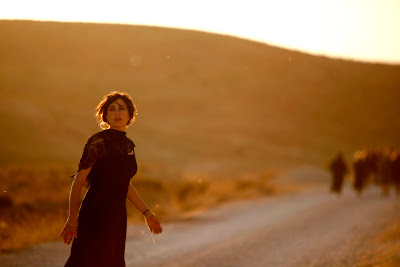 Very few films have the ability to rouse a collective cry of "WTF!". It happened last year when Madonna tried to direct, or more recently when Nicole Kidman performed a golden shower on Zac Efron. As far as festivals go, however, the reigning “huh?” moment remains the day that Nadine Labaki’s Where Do We Go Now? came out of nowhere and won the Cadillac People’s Choice Award at last year’s Toronto International Film Festival. Where Do We Go Now?, a true sleeper hit, beat out acclaimed favourites like The Artist, The Descendants, A Separation, Monsieur Lazhar and more. It’s a testament to the influence that awards have, since a film that was on very few radars became a film to watch. After seeing Where Do We Go Now?, however, TIFF-goers might scratch their heads and ask for a list of names of patrons who gave the film a five on their ballot. 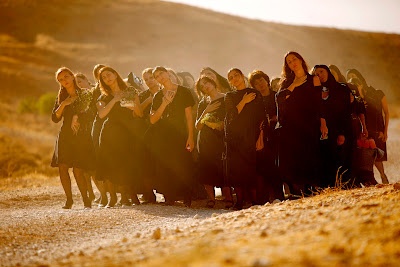 Where Do We Go Now? is an earnest plea for peace, but what it provides it solidarity it lacks in cohesion. The film opens with a parade of widows marching towards the cemetery. They are clad in black, walking slowly and beating their breasts. The voice-over says that this is a film for all women who simply want the fighting to stop. After the narration ends, the mourners gain a stride to their step. They start walking with a sprightly beat, and they proceed in a jolly two-step. Their beating takes on a new rhythm. Thanks to these women, Where Do We Go Now? turns sorrow into celebration.
The women are all members of a village that is torn apart by religious rifts and by violence that masquerades itself as faith. The church is on one side of the road, the mosque is on the other; however, it’s only the women who see through the veil of faith and realize that such godless feuds are tearing the community to pieces. Although it was shot in Lebanon, the story takes place in an unnamed country in the Middle East. As the anonymous sun-scorched earth and Christian-Muslim conflict suggest, we’re right in the heart of Incendies territory, so perhaps that explains the appeal to a Canadian audience.

Despite the heavy subject matter, Where Do We Go Now? reveals itself to be a potpourri musical comedy. It takes the route of finding answers by using humour to question the circumstances that lead to such conflict. It’s hardly Life if Beautiful, but the chorus of female villagers, led by Labaki as the wily widow Amal, provides an amiable story of erasing internal riffs. The women try to hide the religious squabbles by introducing all sorts of modern distractions to their old-fashioned little town. A television arouses some interest through images of sexy women and sporty cars, but the rabbit ears also transmit news of fighting in nearby villages. The women hardly want that.

Taking a cue from the invasions of modernity that find their way into town, the women decide that they can best distract the men by hiring a troupe of Ukrainian escorts. The men, naturally, forget their differences once the blonde and scantily clad beauties appear. All sorts of mild hilarity ensue, mostly in the form of slight gags at cultural difference or lack thereof.

The humour of Where Do We Go Now? provides an accessible message on peace, love, and solidarity. The morale is well received and appreciable, but Labaki also delivers it without the slightest hint of subtlety. Good intentions can only carry a film so far and Where Do We Go Now? squeaks by due to the earnestness of its storytelling. 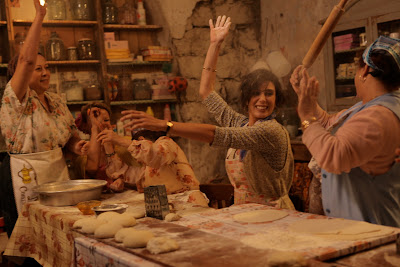 In spite of its clear message, Where Do We Go Now? is narratively unfocussed and tonally uneven. In addition to the story of finding common ground, there is also a simmering romance between Amal and her Muslim handyman, an appearance by the Virgin Mary, and a few random musical numbers. The overall execution is nonsensical, mostly because the random musical interludes are inconsistent and irrelevant (although the one sequence that sees the women make some hashish pastries in order to sedate their husbands adds a spot of fun). The female cast members, especially Labaki, hold it together as best they can and turn in some utterly winning and moving performances,

Where Do We Go Now? plays in Ottawa at The Bytowne until June 14.