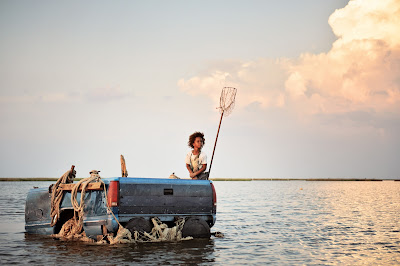 There’s a storm a-brewin’ and it’s coming to the theatre with the force of a hurricane. Beasts of the Southern Wild is, quite simply, unlike any film I’ve seen before. It’s the story of a young six-year-old girl named Hushpuppy (played by Quvenzhané Wallis) who lives with her father, Wink (Dwight Henry), in some place that looks like a bayou in the deep American South. Hushpuppy and her daddy are a few hundred miles south of Winter’s Bone in some magical land called The Bathtub. As Hushpuppy explains in her prophetic narration, The Bathtub is a place cast off by the rest of society. It’s a bit like the Island of Misfit Toys, but filled with real people. Perched on the other side of an ominous levee, The Bathtub will soon be flooded be an impending storm and, as the elders of The Bathtub explain, kids like Hushpuppy are gonna need to adapt to survive once the rivers rise up.

When the storm hits The Bathtub, Hushpuppy, Wink, and their surviving friends hold strong, remain in their waterlogged community, and live off the land and sea as nature taught them. However, the fish in the sea can only last so long because everything in the universe is connected and the problems on the other side of the levee prevent the storm from draining in its full cycle. 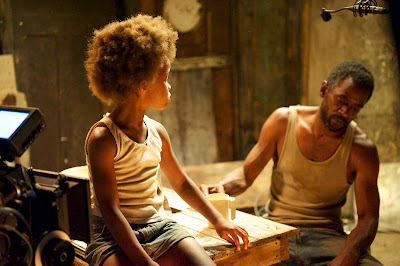 Hushpuppy’s tale of survival is by all regards heartbreaking. The violent storm is enough trouble for one young child, but she must also bear a turbulent alcoholic father who neglects his daughter despite his obvious love and concern for her. Wink’s battle with the bottle relates to the absence of Hushpuppy’s mother: a woman whom Wink said was so hot that water boiled when she entered the kitchen, Hushpuppy’s momma left just after the child was born. All that remains of her are a Michael Jordan jersey with the number 23 and a face etched on the wall of Hushpuppy’s cabin. Hushpuppy is an imaginative anthropologist and is keen to ensure that all the residents of The Bathtub, herself included, will leave their mark on the world and not be forgotten. 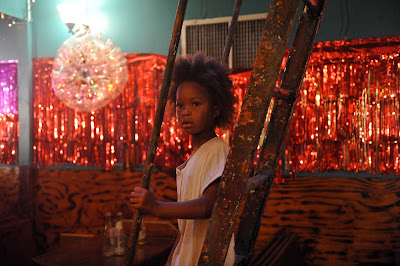 Hushpuppy’s story is simply unforgettable with Quvenzhané Wallis’s revelatory performance and commanding lead. Her performance as the stoic young soldier is sure to win the hearts of all moviegoers. As a reviewer who is often unnecessarily harsh on child actors (see Extremely Loud & Incredibly Close or Safe for examples), I must say that Wallis’s work proves that a young performer can indeed carry a film. This is a surprisingly dynamic and deeply moving performance for such a young performer. Wallis has the heart and spunk of a six-year-old, but as much range and force as the adult who has lived through so many more seasons of rain. (Dwight Henry is every bit as powerful and excellent as Wink.) While one might argue that an actress as young as Miss Wallis may not fully comprehend the emotional range in which her character finds herself and may therefore simply be mimicking the advice of her director, her performance has an undeniable naturalness and sense of spontaneity that makes the emotional heft of her character feel genuine. Even if the actress does not entirely fathom the full depth of the story (there is no proof that she does not, though), one must ask if Hushpuppy understands the full picture. How much of Beasts of the Southern Wild is past and how much is present? How much of Hushpuppy’s voiceover is posed in retrospect? The sense of magical realism that defines the film makes much of the action feel like mere child’s play that helps Hushpuppy survive the poverty of the situation and if Wallis is simply enjoying the moment before the camera as a child playing make believe, she finds a necessary core to her role that makes the film work. On the other hand, if she is indeed simply mimicking direction, she gets the job done perfectly. This girl is fierce.

The sense of child’s play in Beasts of the Southern Wild is what really sets it apart from the other animals at the movies this summer. Told in an imaginative form, scope, and style, Beasts of the Southern Wild is a truly cinematic event. It’s also a potent allegory of the state of the world, with the sodden images of the bayou bearing a too much resemblance to recent disasters to go unnoticed. The film, directed and co-written by Benh Zeitlin, makes a jarring image of the interconnectedness of the world and shows how the impending storm in one place has roots in another. A bit like the butterfly effect, Beasts of the Southern Wild realizes this idea in a startling motif with some magnificent beasts that return to The Bathtub after having been gone for ages. The beasts, presumably extinct as Hushpuppy’s teacher Miss Bathsheeba tells the children of The Bathtub, have been lying dormant in the ice of the South Pole and break free with the winds that bring the storm.

What exactly are the beasts that traverse the lands in this majestic film? They’re an arresting flock of creatures. Viewed mostly in odd fragmentary shots before Zeitlin stages them as a large brooding mass migrating towards The Bathtub, the beasts are perhaps the most elusive yet most intriguing element of Beasts of the Southern Wild. The animals at times look like strong beautiful stallions, like Black Beauty herself but with the quills of a large hedgehog. At other moments, though, the beasts resemble giant pigs or wild boars. The animals seem to change as they escape the ice shelves of the South Pole and float to The Bathtub in the great thaw of global warming. Are these imposing shaping-shifting creatures a foil for the human race or are they merely a reflection of us? 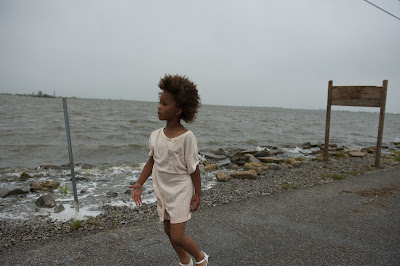 There’s something about the tone, look, and energy of life in The Bathtub that I can’t quite put my finger on, but am sure is responsible for much of the impact. Adapted from the play Juicy and Delicious by co-screenwriter Lucy Alibar, Beasts of the Southern Wild is a bit too sparse and lifelike to be a fantasy, but it is far too imaginative to be considered something else. Perhaps it’s the realism and the sense that The Bathtub is a real place that makes the film so jarring. Unlike the apocalypse in, say, Margaret Atwood’s novel The Year of the Flood, Beasts of the Southern Wild takes place in the present rather than in the distant future. Shot on a budget of less than two million dollars, Beasts doesn’t have the money for elaborate sets and radical effects to transform locations into some far off place. This drama takes place in the here and now, using real people and places to tell a story of a community that was left stranded.

Beasts of the Southern Wild is sure to leave the audience pondering such questions long after the credits roll. Court 13, the excellent team of collaborators behind the film (credited as a whole before director Benh Zeitlin), delivers an evocative piece of filmmaking that is best summarized as “an experience” and might best be appreciated in retrospect after much discussion. For all its saturated bleakness, Beasts of the Southern Wild is, above all, a celebratory film. It’s a monumental work worth celebrating.

Beasts of the Southern Wild plays in Ottawa at The Bytowne until August 5 and at Mayfair Orleans beginning August 10.