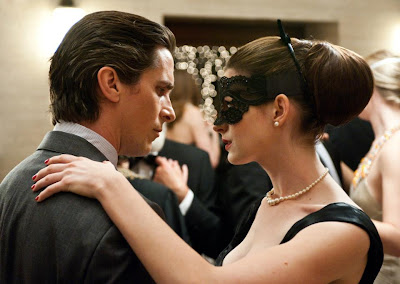 As the third and supposedly final instalment in Christopher Nolan’s Batman franchise, The Dark Knight Rises exceeds its predecessors even if it never quite lives up to its full potential. The last Nolan-directed Batman film, 2008’s The Dark Knight, is an action-packed spectacle, but it doesn’t hold up to repeat viewings. It has extravagant entertainment, but it is also a sprawling mess full of clichéd binaries and a few overblown performances. This criticism is more the subject for another review, but one must simply state the facts because The Dark Knight Rises succeeds by narrowing the scope of its narrative and expanding upon themes and allegories that are alluded to in its predecessors, but never flushed out to their fullest extent. 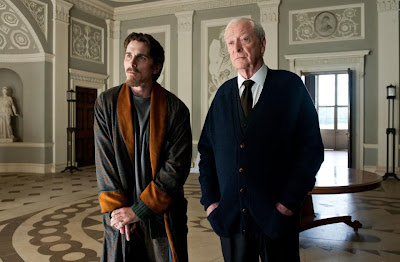 The Dark Knight Rises takes place eight years after the drama of The Dark Knight. The Joker is no longer a memory, but the death of Harvey “Two Face” Dent has become a legend, with the District Attorney’s legacy becoming an act that rid the streets of organized crime. Commissioner Gordon (Gary Oldman) still maintains the charade that Batman is responsible for Dent’s death and that the hero is an outlaw. The dark knight himself has hung up his mask and cape. He roams the streets solely as a myth that inspires and gives hope to a handful of Gotham’s citizens.

Batman’s alter ego, Bruce Wayne (Christian Bale), has stepped aside from the limelight, too. He keeps to himself in Wayne manor as a Howard Hughes-ish recluse. At a benefit thrown by Wayne at his estate, he is so removed that a cat burglar rips him off during his own party. That slinky thief is Miss Selina Kyle (Anne Hathaway), an expert jewel thief who makes off with a prized necklace – and Wayne’s fingerprints – as if they were a canary. Wayne confronts the burglar during her walk around Wayne manor (she’s posing as a waitress at the party), but he has an unexplained ailment or injury that prevents him from fighting back. Perhaps it’s symbolic. 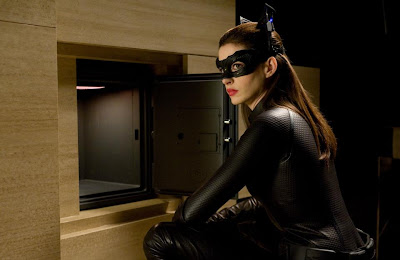 Hathaway is a welcome newcomer to the franchise and she performs well as both a friend and foe to Bruce Wayne. She might not be as deliciously seductive as Michelle Pfeiffer’s sexy S&M Catwoman, although she is incomparably better than Halle Berry, but Nolan and Hathaway make this character more like a distant relative to Pfeiffer’s pfeisty pfeline than a retread. The name “Catwoman” never appears in the film: this is simply Selina Kyle. As such, Hathaway plays her as the most down to earth rendition of the franchise’s villains (as in Batman Returns, though, Selina Kyle is more neutral than nemesis). Even though I had initially pined to see Marion Cotillard don the catsuit (how sexy would a French Catwoman be?), Hathaway’s appeal as the girl next door is essential for bringing out much of Nolan’s ambitious allegory in the film later on in Selina’s relationship with Bruce Wayne.

Selina’s raid on Wayne manor happens at just the right time. Bruce Wayne seems to be backsliding now that he is no longer saving the streets as Batman. Wayne Enterprises is approaching bankruptcy. A major nuclear energy deal with environmentalist Miranda Tate (Marion Cotillard, reuniting with Nolan after Inception) is on the brink of going kaput despite Tate’s relentless appeal that Wayne reconsider the deal. However, Kyle’s theft at the party sparks Batman’s detective skills and the fight is soon reignited in Wayne. He reconsiders Miranda’s deal and, despite the advice of his butler and most loyal friend, Alfred (Michael Caine, who gives one of the film’s best performances), Bruce decides to get back into shape as Batman. 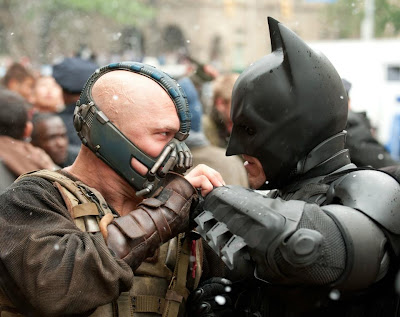 The caped crusader is needed now more than ever. Although the streets of Gotham have been relatively quiet the past few years, there is a new villain wreaking terror upon the city. His name is Bane. Played by Tom Hardy, Bane is a beefy, muscular force of evil. He might not have the substance that The Joker had as the villain of The Dark Knight, but Selina Kyle offers a strong character and Bane makes a good physical foil for Batman and provides some great action. Bane heads a team of devoted mercenaries that kidnaps a nuclear physicist in the film’s opening sequence, which is a stunning aerial sequence that truly needs to be seen in the scope of the film’s IMAX presentation (and 70mm, if possible). The airplane heist might be as good as anything Nolan has ever staged, and it’s an old school adrenaline that starts the film with a great thrill.

If one can put two and two together, the kidnapped physicist and Wayne/Tate’s energy plan add up to some pretty bad stuff. When Bruce finally shows his reactor to Miranda, she is ecstatic that the world might finally have a source for renewable clean energy. Bruce, however, hesitates and fears what might happen if the energy fell into the wrong hands.

Bruce’s fears are soon realized and Bane has Gotham City in a nuclear lockdown. His message, as he says to a crowded football stadium just after he triggers a series of explosions following the national anthem, is that the citizens of Gotham must realize their oppression to those in power, and stand up and take back what is theirs. Therefore, in spite of the good that some of the city’s wealthiest patrons, such as Wayne and Tate, might do for Gotham, Bane puts the leaders of Gotham on trial. 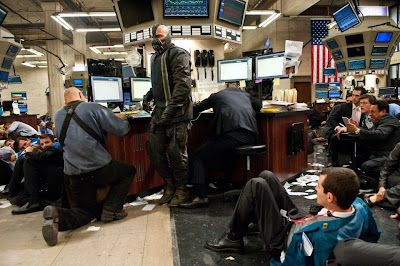 The fight between the rich and the poor has its first echo in the scene in which Selina Kyle steals the pearls from Wayne’s dressing room. As she later suggests in their dance at a masked ball (a scene a bit too familiar to the dance in which Michelle Pfeiffer and Michael Keaton joked about masks in Batman Returns), the pearls are a symbol between the haves and the have nots. It just seems wrong that one man can hoard such an excess of wealth when others have nothing and must fight for scraps.

With Bane’s occupation of Gotham City and Selina Kyle’s embodiment of the feral cat, one can hardly miss the how The Dark Knight Rises has echoes of the recent Occupy Movement and of the dangerous gap that seems to be spreading across America. It’s hard to know how to take the Occupy allegory, though, because the core motive seems a bit unclear. The reason for this lies in one of the film’s most glaring drawbacks: Bane talks from behind a mask and his dialogue is frequently intelligible. Early previews of The Dark Knight Rises drew criticism of this flaw and the sound quality has supposedly been improved since, but there are key moments in the film where it is simply impossible to understand what Bane is saying. This results in a lack of clarity during some scenes, mostly notably that in which he explains his rationale behind his occupation and seems to rationalize his hatred of the wealthy/powerful. 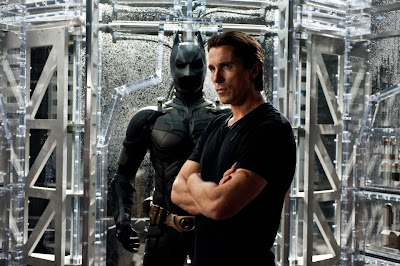 Even if Nolan muddles the use of the Occupy Movement, the relevance of the allegory gains considerable resonance by the film’s end. One can easily see Bane as a mad man or as a false prophet who has the city under siege. The drama with Bruce Wayne and Selina Kyle, on the other hand, shows the importance of recognizing self-interest, oppression, and the pursuit of wealth at the expense of others. As Gotham falls and the poor strike at the rich upon Bane’s command, Selina identifies that there are just means in reconciling the rich/poor gap, and that vigilante justice and terrorism are not the way to do it. When Batman returns to save Gotham from Bane’s deadly clutches, Nolan smartly uses the character and draws out a dimension that’s been lacking from the caped crusader in many of the previous films. As Batman stands up and makes an individual act against the powerful few, The Dark Knight Rises plays upon the fact that Batman can be anybody and that any sort of change needs a few lone individuals to band together and do what’s right. It’s the sort of action that inspires others in turn, much as the heroics of Bruce Wayne motivate an eager young cop named John Blake (Joseph Gordon-Levitt) whom Commissioner Gordon takes under his wing when the legend of the dark knight prompts him to question the structures that bind society.

Working together with most of his regular collaborators, Nolan delivers a solidly made and wholly entertaining blockbuster. The Dark Knight Rises offers some great technical work by editor Lee Smith and cinematographer Wally Pfister, and the score by Hans Zimmer fuels the action with a constant adrenaline rush, although it doesn’t help with the intelligibility of some of the dialogue. The cast is strong overall, with faces like Caine, Oldman, and Morgan Freeman making a welcome return along with the benefit of strong newcomers like Hathaway and Cotillard. Bale probably gives his best turn of the trilogy as the caped crusader, although he spends more time unmasked as his alter ego than in the high-tech bat suit. Much like The Dark Knight Rises features a Selina Kyle without a Catwoman, the film is arguably more about Bruce Wayne than it is about Batman. Moreover, by exploring character drama and real world resonance just as much as high-wire theatrics and explosive spectacle, the strengths of the film far outweigh any shortcomings as The Dark Knight Rises brings the trilogy to a close. Even if it never entirely works, The Dark Knight Rises is arguably the most ambitious film of the trilogy and one feels the sense that Batman has finally moved beyond the realm of the comic book movie with this film.

The Dark Knight Rises is currently playing in wide release. Ottawa residents can catch the film in its 70mm IMAX presentation at the Museum of Civilization in Gatineau. (FYI this venue is of superior quality and less expensive than the crappy multiplexes.)