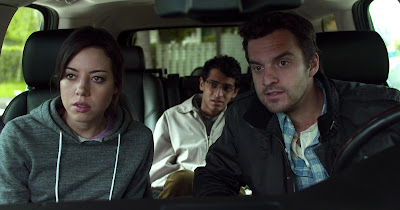 Wanted: Somebody to go to the movies with me. This is not a joke. You’ll get paid with laughs and whatnot. Must bring your own refreshments. I have done this many times before. Satisfaction guaranteed.

How much time does one spend trolling the pages of the Internet, browsing classified ads and Missed Connections on Craig’s List? All those ill-fated encounters are easily the net’s best time amusement this side of Maru, but does one ever wonder about the stories behind these funny little volleys at human connection? Fun and relevant, but without the faux-shizzle pretension inspired by Juno, Safety Not Guaranteed is a funny and unconventional indie comedy that explores the people behind such mysterious messages. 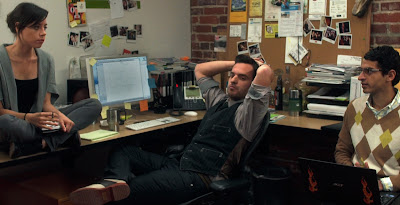 The film is based on a weird but true story about a personal ad that was placed in a local newspaper. The message appears in the film during an editorial meeting at Seattle Magazine. It reads, “Wanted: Somebody to go to back in time with me. This is not a joke. You'll get paid after we get back. Must bring your own weapons. I have only done this once before. Safety not guaranteed.” A columnist, Jeff (Jake M. Johnson), suggests that the ad offers a lunatic fringe story that is ripe for the plucking. His editor, played with wonderful bitchiness by Mary Lynn Rajskub (24’s Chloe O’Brien), agrees: if it involves real time travel or a legitimate nutcase, this ad poses a great story.

Joining Jeff on a trip to cover the story in the small seaside town of Ocean View, Washington is Darius (Aubrey Plaza), the narrator and disillusioned young protagonist of Safety Not Guaranteed, and Arnau (Karan Soni), a dorky biology student. Darius and Arnau are both lowly interns who tag along with their chauvinist pig of a boss as he exploits their eagerness and lets them do the grunt work. (Ah, the joys of unpaid work.) Rather than simply reply to the ad and follow the story in the conventional route of hook and bait, Jeff puts the interns on a reconnaissance mission at the local post office. Darius spies a man open the fateful P.O. Box marked 91. 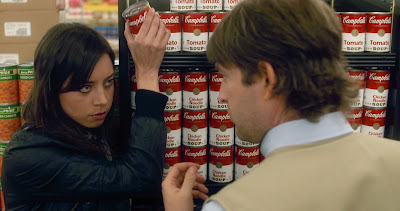 After Jeff botches an attempt to befriend the man, Darius approaches him stealthily and seductively in his place of work: a discount grocery outlet. Whilst he stacks cans of Campbell’s Soup – a lovely image of contemporary mundaneness – Darius learns that her subject is Kenneth (played by Mark Duplass, co-writer/director of Cyrus and Jeff, Who Lives at Home). Darius pretends to offer a response to Kenneth’s ad. The tactic works and Kenneth invites her to do some preliminary auditions and recon work for their time-travelling expedition.

Meanwhile, Jeff pursues the real lead that inspired him to come to Ocean View. An old flame or, as he describes it ever so delicately, his first blow job, recently accepted his Friend Request and he thinks that it is time to mend a Missed Connection. The girl, Liz (Jenica Bergere), works in a nearby hair salon and is willing to meet again.

As Jeff works to get his bone smooched (and Arnau’s, whom Jeff thinks is acting a bit too dweebful in the prime of his youth), Darius pursues her relationship with Kenneth and gets to the heart of the story. Kenneth seems a bit off. He is paranoid, prone to rage, and just a little bit gun crazy, but Darius sees a lot of heart in him as his desire to revisit the past is to save the life of an old girlfriend. Darius, on the other hand, opens herself up to Kenneth and tells him that her motivation for time travel is to take back the unkind last words she spoke to her mother before she died. Better yet, she can save her mother if Kenneth’s plan is true.

With a story so eccentric and characters so real and developed, it’s no wonder that Safety Not Guaranteed scored screenwriter Derek Connolly the Waldo Salt Screenwriting Award at this year’s Sundance Film Festival. Safety Not Guaranteed is a quirky little tale and a fresh, welcome film that manages to be hip, funny, and on the pulse of today’s generation, but it avoids the annoying self-conscious precociousness that too often passes for indie greatness these days. Director Colin Trevorrow gives the film just the right tone and energy, too, and the film has just the right edge of cynicism within its bright look and madcap glimpse into small town America and the kindness of strangers. Safety Not Guaranteed is a laudable exercise in quality filmmaking, and shows what kind of greatness one can do with economical running time of  eighty-six minutes and an equally tight budget of approximately $750 000, 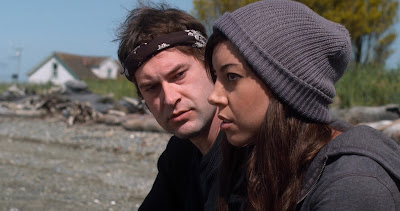 A lot of credit is due to leading lady Aubrey Plaza, who gives a hilarious performance as the droll and jaded Darius. She’s is dark and deadpan, but also a little bit like the girl next door. It’s the kind of winning performance that should make her a star. (Look at Ellen Page.) The rest of the ensemble is equally sprightly and funny, especially Duplass in his weird, but endearingly philosophical performance as Kenneth and Johnson as the love-struck ass Jeff.

It’s the parallel storylines between Darius/Kenneth and Jeff/ Liz that give Safety Not Guaranteed much of its spark and substance. Kenneth tries to reverse time so that he can have the life he desires, while Jeff tries to revisit the past and make amends for a fresh start. In spite of its highly original premise, then, Safety Not Guaranteed is not about time travel, but about how we can’t go back in time and erase the mistakes we have made. The wanderers of Safety Not Guaranteed are forced to evaluate their situation and use the lessons of the past to guide the present, for, as the narrator says at the end of Todd Field’s Little Children, “You couldn't change the past. But the future could be a different story. And it had to start somewhere.” The story of Safety Not Guaranteed is how an unruly group of misfits overcomes the odds and succeeds. It’s a fun, triumphant underdog story, and it’s just the right tale for what could be the sleeper hit of the summer.

Safety Not Guaranteed is currently playing in limited release.
It plays in Ottawa at The ByTowne on August 29 and 30, but we’ll let you know if it’s in town beforehand!