Seduce and Destroy! 'Burlesque Assassins' is Coming to Town 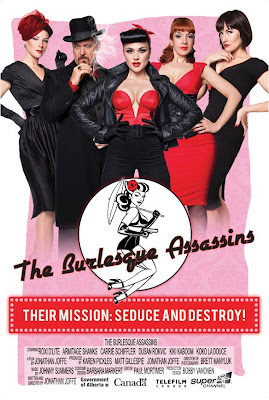 They are sexy. They are deadly. They are The Burlesque Assassins. Their mission: SEDUCE and DESTROY! Fans of grindhouse cinema should be glad to hear that there’s a fun and saucy film travelling around Canada, and it’s making a pit stop here in Ottawa within the next few weeks. The Burlesque Assassins, directed by Jonathan Joffe, is a vintage action-comedy with looks that kill. Set in the 1950s, Burlesque Assassin is a tale of cold war espionage and intrigue about a team of sexy super-spies that seduce their way within killing distance of a trio of villainy hell bent on global domination. Advertising both carnage and cleavage, this is just the kind of film for the Midnight Madness crowd or anyone who likes the combination of pin-up and popcorn.

Burlesque Assassins is generating lots of buzz already. The novelty of these buxom femme fatales looks like an inspired mix of Russ Meyer and Quentin Tarantino. The Tarantino-ness seems to be catching on best, with The Province observing, “A glimpse at the movie’s trailer shows comic revisionism in the vein of Tarantino’s Inglourious Basterds, with a fraction of the budget and barely any violence, but more cleavage.” It might not have the big budget of Tarantino’s last flick, but let’s remember that Tarantino began his career with the low-budget goodness of Reservoir Dogs.
Burlesque Assassins, likewise, is a modestly funded action pic, which was shot in Calgary during April 2011. The film was nominated for ten Alberta Film & Television Awards (aka The Rosies) including Best Picture and it took home the prize for Best Cinematography for Brett Manyluck. A true to form independent production, Burlesque Assassins is doing its release the old fashioned way by taking its show on the road and hosting one-night-only screenings in various cities across Canada and, eventually, Sydney Australia. To add an extra bit of pizzazz to the show (if the premise of girls n’ guns isn’t already a draw in itself), the screenings of Burlesque Assassins will be accompanied with a live show in conjunction with local burlesque troupes. (In the case of Ottawa, it’s Capital Tease.) Sounds like a fun spanking time!

The Burlesque Assassins hits Ottawa on Wednesday, July 25th at the Alumni Theatre at the University of Ottawa (85 University St.). Doors open at 7 pm. The screening and live show features Armitage Shanks and Performers from Capital Tease Burlesque. Please visit http://www.capitaltease.com/ for more info and tickets can be purchased here. See you there!


Want to know when the Assassins are in your town? Here are the other stops on the trip:
-Vancouver: Wednesday, July 18, 2012 at The Rio Theatre
-Toronto: Friday, July 20, 2012 at the Bloor HotDocs Cinema
-Calgary: Wednesday, August 1, 201 at The PlazaTheatre
-Halifax: Friday, August 3, 2012 at ReflectionsCabaret
-Sydney, Australia: Saturday, August 4, 2012 at 8:00pm at Chauvel Cinema