The Deadly Tease of the Tassel 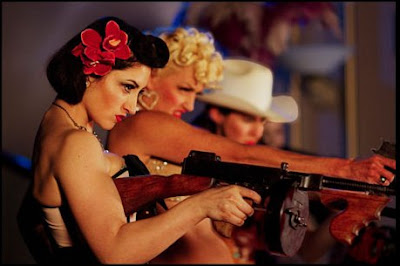 The film opens in Bucharest in that strange, uncertain period between the Second World War and the Cold War. Katerina Molotov (Carrie Schiffler) is a sexy KGB agent on a mission to squeeze information out of a renegade war criminal. The founder of The Burlesque Assassins, Miss Molotov is a leader in seduce and destroy missions. She can tease the information out of a mark, or get the job done by force. 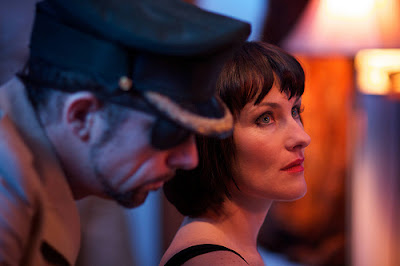 Although Katerina Molotov is a stealthy femme fatale, she has a man in her life. That man is Johnny Valentine (Armitage Shanks), who doubles as Katerina’s ally and lover. (Every thug needs a lady.) The mission goes down with the lovers split and destined for a secret rendezvous, but the where and when remains a mystery since they both need to lay low for a while.

The action moves from the deadly streets of war torn Bucharest to the cold, violent streets of Windsor, Ontario. Enter Bourbon Sue (Roxi D’Lite): a regular of the after-hours scene in Windsor who is named after her favourite drink. Sue is a bit of Bettie Page and a bit of Betty Boop and, like Katerina Molotov, she has skills of a greater calibre. Sue can catch a man’s eye and she packs a mean punch. 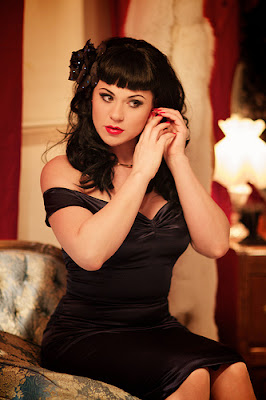 When Sue’s street skills catch the eye of Johnny Valentine, he makes her an honorary member of the Burlesque Assassins. Johnny Valentine has kept the trope of spy mavens alive in the absence of Katerina Molotov, but he’s honoured his lover’s work by saving the world with buxom beauties. Like Charlie’s Angels with the sass of the violent femmes in Faster, Pussycat, Kill! Kill!, the Burlesque Assassins are a lethal bunch. Johnny Valentine already has the deadly duo of Missy Starlight (Koko La Douce) and Bombshell Belle (Kiki Kaboom), but he needs the seduce and destroy methods of Bourbon Sue to help him with the assassins’ latest mission.

It seems there is a mole in one of the agencies, so nobody is to be trusted other than these three: Missy Starlight is too foreign, Belle is too crazy, and Sue is a nobody, explains Johnny Valentine. Their mission is to end all this Cold War era madness by infiltrating a cabaret club disguised as a trio of burlesque dancers. Then, they must take out some marks and retrieve the codes for a Nazi death ray that could be the end of the world.

As the Burlesque Assassins shake a leg and save the world in a frenzy of Looney Tunes violence, The Burlesque Assassins doesn’t take itself too seriously, so the film is a great piece of escapism and a good ole time. It’s sexy and hilarious, and quite stylish, too, with some fun black and white archival reels that explain the backstories of these deadly damsels. Burlesque Assassins boasts some fun performances, especially Armitage Shanks as Johnny Valentine, who even dons a racy dress and catches Hitler’s eye. That takes confidence.

Joffe also offers a great chance for the world of burlesque to strut its stuff. The film crosscuts between the Assassins’ mission in the backrooms and the on-stage performances by a host of burlesque stars. As the Assassins interrogate and the dancers titillate, the audience is sure to enjoy the deadly tease of the tassel. These sequences show that there really is an art to the performance of a burlesque number, and the film should challenge any misconceptions that the dance aims to please through sleaze. Catcalls and whistles are encouraged during The Burlesque Assassins, but the dancers always keep the show a class act. The nipple is a no-no in burlesque and, as Katerina Molotov tells a dancer during the film’s opening number, burlesque is always best when it leaves the audience wanting more.

Katerina’s advice is half the fun of The Burlesque Assassins because the film comes packaged in an event that leaves the audience wanting more, but it delivers more, too. The film is travelling on the road and screening in a night combined with live performances from local dancers. The Ottawa event featured numbers by local burlesque performers from Capital Tease, the highlight of which was a number by co-founder Koston Kreme as she paid homage to the film in a fun and sexy number with blood on her hands and some sensual strings of pearls. The event was MC-ed by Armitage Shanks and he got the crowd going, and the dancers won over the audience at the intimate Ottawa screening. The Burlesque Assassins is really a film that should be enjoyed with a big group, though, with a few drinks beforehand to liven spirits and get into the groove of a really fun night. The Burlesque Assassins is a true event for any fan of alternative fare.

Rating: ★★★★ (out of ★★★★★)
For more info on the film and upcoming screening events, please visit www.burlesqueassassins.com or the the Burlesque Assassins Facebook page .

UPDATE: The Burlesque Assassins is now available on iTunes.