Will Ferrell Wants YOU to See His New Movie 'The Campaign'! 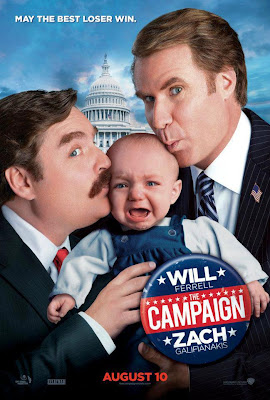 Just in time for the upcoming American election, Will Ferrell is running for office. When long-term congressman Cam Brady (Ferrell) commits a major public gaffe before an upcoming election, a pair of ultra-wealthy CEOs plots to put up a rival candidate and gain influence over their North Carolina district. Their man: naïve Marty Huggins (Zach Galifianakis), director of the local Tourism Center. As Election Day closes in, Cam and Marty are locked in a dead heat, with insults quickly escalating to injury until all they care about is burying each other. From director Jay Roach (Meet the Parents, Game Change), The Campaign is a mud-slinging comedy that takes today’s political circus to the next level.

Thanks to our friends at Warner Bros. Ottawa, we can send you and a friend to the Ottawa premiere of The Campaign! All you have to do to enter is watch the trailer for The Campaign and tell us who gets your vote: Cam or Marty.

Email your answer along with your full name to contests@cinemablographer.com with the subject “The Campaign.” Bonus entries go to anyone who RTs this contest on Twitter or shares it on Facebook!

If you want to increase your odds of winning even MORE, head on over to Warner Bros. Ottawa on Facebook and Twitter. Remember: he who kisses the most babies wins the election!