A Love Story of Boys and Their Toys 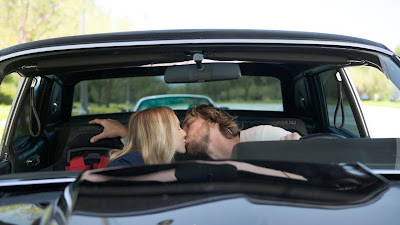 Hit & Run is a love story. There is a romance between Annie and Charlie, played by real life couple Kristen Bell and Dax Shepard, but the true love in this movie is between men and their cars. Hot rides and big engines give a man confidence, and, if one believes a myth from the Don Draper days, a car is like an outward expression of a man’s manliness. It is a status of what a man can and cannot have. If you saw Mad Men’s best episode this season, “The Other Woman,” you know exactly what I’m talking about. 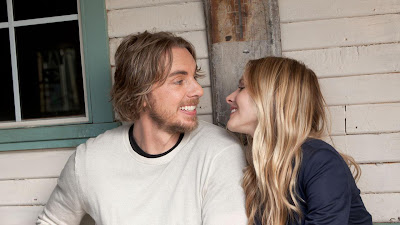 Annie and Charlie (last name Bronson) are two lovers on the lam. Their road trip begins all sweet and innocent with Annie urgently needing to get to Los Angeles for an interview for her dream job at a university. The bump on their road is that Charlie is not supposed to leave their small town of Milton because he is in witness protection. For the love of his girl, though, Charlie brings his souped-up Lincoln out of hiding in order to drive Annie to her interview that is less than 48 hours away.

Charlie has stowed the car because, as it develops, he used to be the getaway driver for a team of bank robbers. His past comes after them when Annie’s jealous ex-boyfriend, Gil (Michael Rosenbaum), calls in a tip to his brother, a flamboyantly gay police officer (Jess Rowland), who traces the plates of the flashy car back to the name of Yul Perkins. A simple Google search gives Gil all the dirt on Mr. Perkins including the names of the friends against whom he testified for a plea deal. A simple Friend Request is sent to Alex (Bradley Cooper, sporting a dreadlocked ’do), and Charlie’s cover is blown. 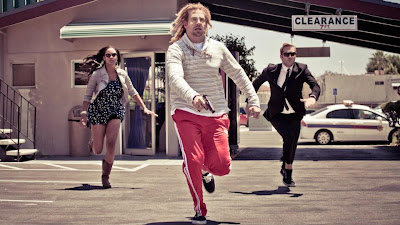 Annie realizes that something is up once Gil tracks them down in their motel and smashes Charlie’s faces with a putter. The bigger tip-off, though, is the trio of thugs – Alex, Neve (Joy Bryant), and Allen (Ryan Hansen) – who pull up to the motel a red station wagon with guns a-blazing. Charlie has some ’splainin’ to do.

However, since Charlie spent his past life as a getaway driver, he has the stealth and skill to evade the all the people who want him dead. Hit & Run offers one stylish car chase after another. It’s action-packed entertainment.

Charlie’s hot pursuit of Annie also makes for a sweet little love story, if car chases aren’t really your thing. There’s something for everyone in Hit & Run, just so long as you don’t mind taking it with a little dose of R-rated goodness. Coming from the producers of Wedding Crashers, it should almost go without saying that Hit & Run is raunchy fun. This is a ‘no-holds barred’ approach to the rom-com, with totally un-PC barbs thrown at everyone. Hit & Run is violent, crass, rude, offensive, raucous, mindless, senseless, gratuitous, gross, racist, sexist, homophobic, cheeky, brazen, bold, and belligerent. It’s also wickedly funny. The spirited antics of the cast make for a most entertaining movie, especially a scene-stealing Kristen Chenoweth who borders upon shameless in her role as Annie’s pill-pushing colleague. Hit & Run also features a geriatric nude scene that makes Kathy Bates’ skinny-dip in About Schmidt look hot enough for Playboy. 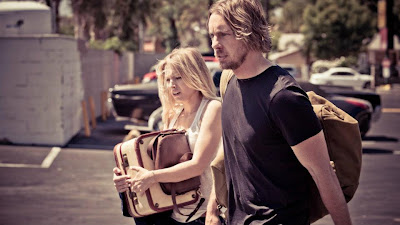 Hit & Run, the second feature written and co-directed by leading man Shepard, takes the formula of the guy movie and injects it with a nice soft spot. The development of the romance might make for a slow beginning, but the movie revs up as it goes along, mainly when all the characters are in hot pursuit. Thanks to the fun play that the film has with the vehicles, our protagonist sails along in his robust Lincoln, followed by Cooper’s surfer bum in a soccer mom car and Annie’s d-bag ex in a Pontiac Solstice. Last and certainly least, Tom Arnold pulls up the rear and putters about like a ninny as a Federal Marshall in a minivan. Who takes a minivan to a high-speed chase? (Arnold’s a good sport in this part, though.)

It’s the car that makes the man, and Charlie Bronson wins the race with the boys and their toys. While Hit & Run might not be the luxury vehicle of, say, Drive, it’s sporty, flashy, and sure to get some motors going. It’s a good escape for anyone running on empty this summer.