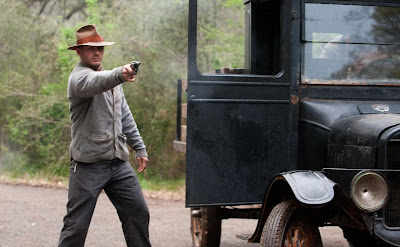 It’s hard to get drunk on Lawless. This prohibition-era western sprays a wealth of ultraviolent gunplay, but it fires blanks instead of piercing bullets. The film makes for a disappointing reteaming of John Hillcoat and Nick Cave, the director and screenwriter of the spectacularly gritty and hot-blooded western The Proposition. Whereas The Proposition felt like a visionary entry in the genre, Lawless just comes off as dull and formulaic. 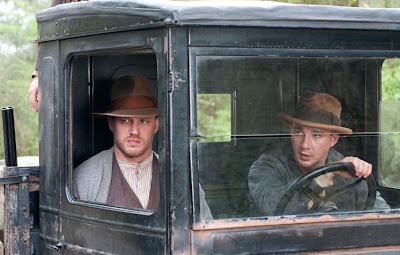 Lawless offers the true story of the three Bondurant brothers – Jack, Forrest, and Howard – who were notorious bootleggers and peddlers of moonshine in Franklin County, Virginia. The Bondurant boys made Franklin the wettest country in the world, so says the book by Matt Bondurant on which the film is based, which in turn made them the target of some nasty lawmakers who aimed to enforce the dry spell of prohibition. Luckily, though, Howard (Jason Clarke) and Forrest (Tom Hardy) are rough and tough hillbillies. The little Bondurant, Jack (Shia LaBeouf – not pronounced “LaBeef” as in Matt Damon’s character in True Grit), is an innocent young man who drives the getaway car, but dreams of being a gangster. The Bondurant boys are an odd bunch with Hardy continuing his mumbly Joe routine from The Dark Knight Rises (although he is far more audible this time) and with LaBeouf being nowhere as bad as usual.
Even though the Bondurants make a fairly peaceful business of selling their bathtub whisky throughout the county, they invite the wrath of an ambitious city slicker lawman from Chicago. His name is Charlie Rakes and he’s played by Guy Pearce in an uncharacteristically bizarre performance. Rakes is a strange, effeminate weirdo who speaks in a variety of accents, the most discernible of which is the campy drawl of aristocracy invented by Hilary Swank for The Black Dahlia.

A few other strangers ride into town around the same time that Rakes does. The first to appear is the big time city gangster Floyd Banner, played by Gary Oldman (a badass, as always), who becomes Jack’s new hero when he drives into Franklin in his swanky car and opens fire on the thoroughfare with his Tommy gun. Then he drives away and the plot becomes an afterthought. 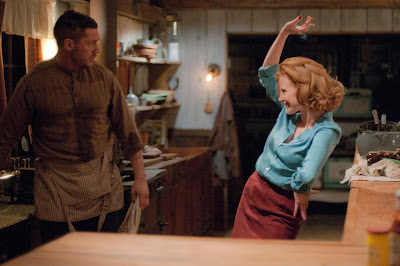 The second stranger to set Franklin a sizzle – and this one creates considerably more fire – is Maggie, a runaway showgirl played by Jessica Chastain. Even though Maggie sports Chastain’s refined air and classically beautiful looks, she tells Forrest that she needs to escape the fast life of the city. Chastain seems miscast as the fugitive floozy on first glance, but the actress is strong enough to sell Maggie’s conviction and her dreams of a better life. Chastain’s performance is arguably the best reason to see Lawless.

Much else in Lawless, however, is a bit of a misfire. The overall point of the film is never really clear, nor is the justification for the excess of gratuitous violence. As violence begets more violence and the Bondrurants exchange fire with Rakes and his clan, Lawless runs in circles when it should be walking ten paces at high noon. The film utterly collapses in its final act, too, with a climactic showdown that is little more than a hillbilly bloodbath of cartoonish violence. Lawless borders upon self-parody by the time the final credits roll. 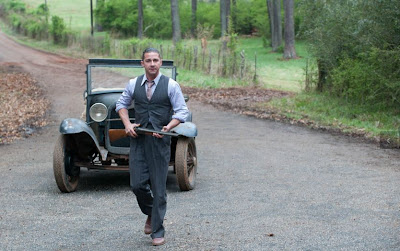 Not all is hopeless in this tale of the rugged rural life, though, if one considers the strength of Chastain’s performance, as well some admirable efforts by the arts and craft crew. The costumes by Margot Wilson are well tailored to the period, as is the score by Nick Cave and Warren Ellis. (The soundtrack is great overall.) Lawless also makes an interesting generic spin on the fine line between the westerner and the gangster through Jack’s aspirations to be somebody. It’s unfortunate that Gary Oldman’s character appears so little, since his gun-toting enforcer is more exciting than the outlaws back in Franklin County are.

Perhaps the genre-play in Lawless proves a good example of the fight that emerged between the westerns and the gangsters back in the early days of the Hollywood studios. The gangster survived and became a hallmark of American cinema, best canonized by The Godfather, while the western fizzled out until it made a comeback with Unforgiven before it died out again. The gangster film always finds a shred of relevancy when its take on the American dream echoes through the bullet casings that riddle throughout. The western, on the other hand, evokes a dated morale, which is hard to forget unless the myth is deconstructed in some visionary take akin to Unforgiven or No Country for Old Men. Lawless, unfortunately, falls into formula and offers little new. Perhaps if the bootlegging racket were to be run by Gary Oldman and Jessica Chastain, Lawless might be premium whisky. Instead, it’s simply bathtub whisky.