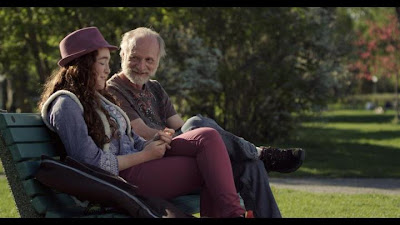 A young girl and an old man lie on the floor. Their sweaty faces are framed in close-up. “What just happened… stays between us,” the old man says to the young girl. Ick.

That young girl is thirteen-year-old Lilly (played by Sophia Radisch, who is thirteen herself) and the old man, at the ripe age of sixty-eight, is Dan Palmer (played by Ron Tarrant, who might be sixty-eight himself, but there comes a time when it is no longer polite to ask). Whether Lilly and Dan just had sex goes unsaid, but their perspiring faces and short breath force a certain inclination on the viewer. Thirteen Downs has the viewer uncomfortably pondering the relationship of Lilly and Dan from its opening scene. 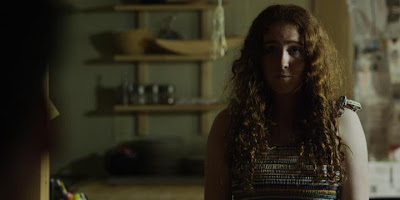 After the opening credits, the film – written, directed, and produced by local filmmaker Karim Ayari – flashes back to the events that brought Lilly to Dan’s quaint little cottage at 13 Downs Street near Wakefield, Quebec. It’s refreshing to see some Ottawa locations creep through the excess of close-ups in Thirteen Downs, especially Westboro’s Baker Street Café where Dan takes Lilly for their first “date.” It’s too bad that both characters neglect to mention how Baker Street serves the best brunch in town, but the fact that they commute from Wakefield just to enjoy a bowl of soup should give a pretty good hint.

As Thirteen Downs explains the steps from Lilly and Dan’s date to their floorboard panting, the film crosscuts past and present by placing the story of Lilly and Dan’s relationship side by side with an encounter between Lilly and Dan’s son, Stuart (Richard Gélinas). Stuart drops by 13 Downs in order to visit his dad on his birthday. They are estranged, but Stuart seems ready to make amends; however, he’s understandably surprised when a breathless teenager answers the door. She’s visibly flustered and says that Dan is not home. A mild altercation ensues between Stuart and the houseguest. Lilly eventually becomes calm and explains that Dan is out buying some tea. To pass the time, Stuart has Lilly explain how she met his father. 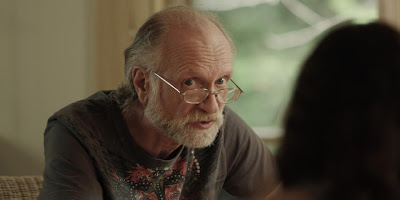 The film employs an intriguing temporal structure by weaving back and forth from scenes of between scenes of Lilly with each generation of the Palmer family. Both storylines leave no doubt that there is some impropriety going on, but the ‘who’ and ‘why’ fluctuate with the new bits of information granted in each one. Although Lilly is a complicated little character, the real enigma of Thirteen Downs is the ongoing reveal in Dan. He seems like your standard dirty old man at first, but as he spends some more time with Lilly, it seems like he is just a lonely man in search of a friend; however, when a concerned waitress starts asking questions, Dan lies to her and says that he is Lilly’s grandfather. The motivation for this nice man is rather murky.

The tone and structure of the film create an air of ambiguity; however, although the film has an element of mystery, it is mis-marketed and improperly pitched as a thriller/suspense. Thirteen Downs builds to a genuinely surprising twist, but one might best appreciate it if one approaches it as a provocative family drama. The story is painful and the subject is matter risqué. Thirteen Downs is also intimate and claustrophobic, especially with how Ayari frames the dramatic triangle mostly in tight close-ups within the enclosed space of Dan’s cottage. The drama sometimes feels contrived as it unfolds, but the actors buoy the material, with Ron Tarrant giving particularly good work as Dan. The overall impact of Thirteen Downs, however, is slightly muted by its over-length, which could have been remedied had it featured fewer montages and interludes of favourite songs, and been less prone to slow motion. Thirteen Downs is narratively and thematically intriguing, however, so a tighter cut might deliver the film in its full force.

On the other hand, Thirteen Downs works rather well for such a small production (the film reportedly cost only $10 000), so its shortcomings are relatively forgivable, particularly because it shows promise for our local filmmakers. As the film selected to open this year’s Ottawa International Film Festival, Thirteen Downs, which credits OIFF Executive Director Nina Bains among its producers, is a good example of the budding talent in Ottawa’s film scene. It might be difficult for the film to expand beyond the local level, but Ottawa fans should certainly note the progress of the talents within the city’s film scene and expect to see more.