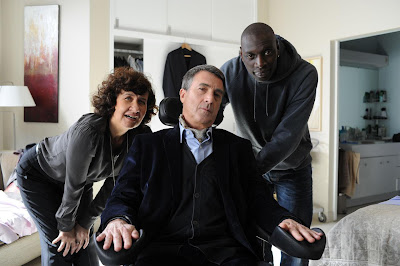 The French mega-hit The Intouchables is a true crowd pleaser. It’s easy to see how it became the most widely seen film in France for 2011, and France’s second biggest box office hit of all time. The first is 2008’s Bienvenue chez les Ch’tis. Ch’tis is charming, but it’s as dumb as a brick. It’s the French Porky’s, if you will. (In a PG-13 kind of way.) Regardless, Intouchables is a better piece of cinema than Ch’tis is, so it’s no wonder that this buddy comedy has gone on to become the highest grossing non-English language film of all time. And it’s not even in 3-D!

The Intouchables is based on the true story of an unlikely pair of friends. Driss (Omar Sy) is a Senegalese immigrant looking to collect enough signatures so he can collect welfare. Philippe (François Cluzet [a.k.a. Dustin Hoffman’s French doppelgänger]) is a wealthy quadriplegic Parisian. When Driss shows up at Philippe’s swanky flat for a job interview with the sole purpose of collecting a signature he needs to prove that he applied for the job, Philippe sees the ideal candidate for a personal assistant. Driss is strong and friendly, but above all, he is an outcast and looks at Philippe without a grain of pity. 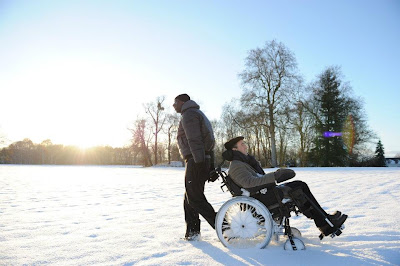 As Driss begins his job with Philippe, The Intouchables shows an obvious case where worlds collide as the young man moves from the banlieues of Paris (housing projects on the outskirts of town) to a Versailles-like apartment in the heart of the city. Poverty meets privilege, but the sudden onset of class and comfort don’t overwhelm Driss. He earnestly takes to the job of being Philippe’s caregiver and assistant.

The two men have an instant rapport, as their obviously dissimilar personal histories offer them each an air of novelty. Both Driss and Philippe are outsiders, though, so they eventually come to see each other as equals and their relationship evolves into one that is mutually beneficial rather than the archaic master-servant roles. One might feel a bit uneasy at first in watching this story of the encounter with the “other”, but Driss is hardly the cliché-ridden mythical black man like, say, Bagger Vance. I might have liked this story better in the 1980s when it was called Driving Miss Daisy, but the fact that the social roles in contemporary France seem much like those of a 1989 period film might tell viewers a lot about the country’s (unofficial) attitude towards multiculturalism. 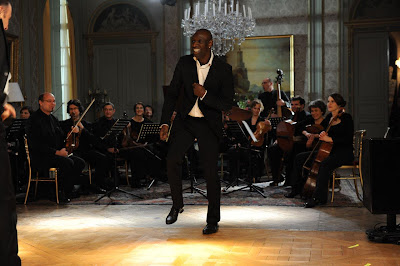 There is something problematic in the portrayal of race in The Intouchables, but the film is based on a true story, after all, so this is one of those cases where it’s hard to fault actual events. It’s especially difficult to criticize the film because this true story is dramatized so well, primarily by actors Cluzet and Sy. Sy in particular shines in his breakthrough role as Driss. (Sy won the French César for his performance, besting Oscar-winner Jean Dujardin.) Even if the film only skirts the surface of Driss’s social situation, The Intouchables certainly shows a side of Paris that appears in few films.

The film’s heart is undoubtedly in the right place and it’s impossible to deny the sense of joie de vivre that one gets from the life lessons taught by this odd couple. It's a heart-warming tale of second chances. The Intouchables is full of good-natured humour, and it offers a clear message of humanity and compassion. Simplified or not, The Intouchables is feel-good fun for everyone.

The Intouchables screened in Ottawa at The Mayfair.
It screens again at The Bytowne from September 16-19 and from October 12-14.