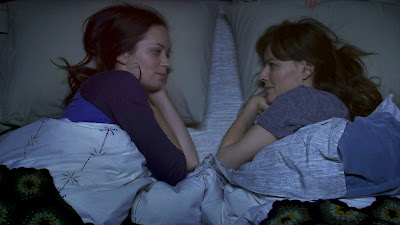 Lynn Shelton, one of the momma’s of mumblecore, delivers a new daughter of a film that proudly wears its low-budget naturalism in every frame. Her film, Your Sister’s Sister, was shot in a mere 12 days with much improvisation and creative collaboration from actors Emily Blunt, Rosemarie DeWitt, and Mark Duplass. The direct sound is a little wonky and the camera is a little wobbly, but that’s half the method of the movement. The greater half, and this is where Your Sister’s Sister succeeds most, delivers a drama brimming with true to life rawness and honesty.

Your Sister’s Sister, as the title suggests, is a complicated and intimate family drama. The film opens with a group of friends eulogizing their peer that they lost a year ago. In the background of the dingily lit apartment stands Jack (Duplass), the brother of the deceased comrade, who tells the friends that they’re celebrating a man they only half knew. Jack is clearly in an emotional funk after losing his brother. It’s a loss that could only be appreciated by someone like Iris (Blunt), the ex-girlfriend of Jack’s brother, who enjoys a close relationship with her sister Hannah (DeWitt). 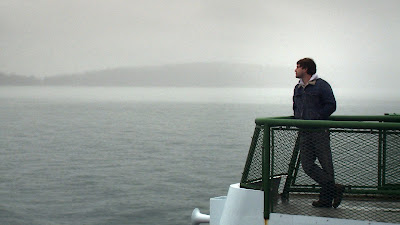 To pick Jack out of his misery, Iris writes him a prescription to spend a few days of solitude at her family cottage. The cabin is supposed to be vacant, but Jack arrives and finds that Hannah has already set up camp. After an awkward encounter with an oar, a bike helmet, and some endless apologies, Jack cools things with Hannah and they decide to share the place.

Like Jack, Hannah seeks solace in the country camp to recover from a loss. She explains to Jack that she walked out on her girlfriend of seven years. Jack sympathizes and offers an ear for Hannah’s bottled up emotions. A few hours and many more tequila shots later, Iris’s sister finds herself in bed with Iris’s best friend. Hannah might be a lesbian and Jack might be in love with Iris, but nobody’s perfect.
A complicated little triangle ensues when Iris makes a surprise visit to the cottage. Despite the convolution of the situation, though, the trio of actors sells the drama rather well. I’m partial to Rosemarie DeWitt, but all three leads offer natural performances and work together with Shelton’s freewheeling camera to deliver a drama that rings of the spontaneity and unpredictability of life.

Your Sister’s Sister is a thorny tale of the messiness of love. Like Jack’s scruffy appearance, the loves in question in the film – kinds both familial and romantic – have a painful disorderliness. Much like sibling rivalry or the pang of unrequited affection, the relationships in Your Sister’s Sister bubble over with a love/hate dynamic found only in the closest and most intimate of connections. Things get extraordinarily confused once the drama explodes between these friends/sisters/lovers, but Shelton and her actors never let the action stray from the realm of believability. The film even wraps up in a nice convenient package; however, Shelton makes sure to tussle the wrapping and she offer an ending that rejects closure and makes the film more true to life.


Your Sister’s Sister is now available on home video.