The Game of Politics 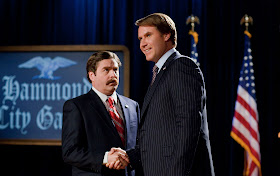 Oh, do we not all love the three-ring circus called American politics? The Campaign, the latest effort from funnymen Will Ferrell and Zach Galifianakis, takes aim at the two party farce of American democracy. Politics is a dirty game with no rules. Candidates will do whatever it takes to win. No trick is too foul. No wife is safe. 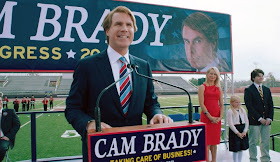 The political race of The Campaign begins as an easy victory for incumbent Cam Brady (Ferrell). Cam, a Democrat, looks to be running unopposed in his bid for a fifth straight term in Congress. However, a public snafu involving cuss words, an answering machine, and a family of the Christian Right lands Cam in the doghouse. His numbers are worse than ever and now is the time for the Republicans to strike.
Big Business sees an opportunity in Cam’s North Carolina district, and the Motch brothers (played by Dan Aykroyd and John Lithgow) realize that they have a prime chance to back a candidate who will support their business, err, politics. That candidate looks to be Marty Huggins (Galifianakis), a bumbling, slightly effeminate doofus who happens to be the son of a wealthy party stalwart (Brian Cox). Marty accepts the job with relish. He soon finds himself in a pickle, though, when he is no match for the dirty tricks of Cam Brady. 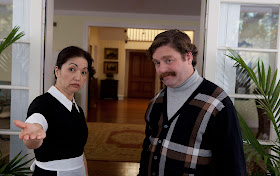 Hilarity ensues as Ferrell and Galifianakis face off in a series of crass slapstick antics. The Campaign is true to the form and philosophy of American politics, as Cam and Party eschew substantial messages, spurt empty rhetoric, and plead 9/11. It’s all in the name of America, Jesus, and Freedom. What begins as a civil campaign escalates into a full-scale war with mudslinging galore. Baby-kissing becomes baby-punching. Even Uggie, America’s favourite dog, finds himself the victim of a right hook from these political animals. (The Uggie-punch is easily the highlight of the film and is rivalled only by an uproariously un-PC Asian housekeeper whom Marty’s father pays to speak in an exaggerated Southern drawl.) 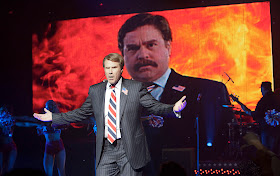 The Campaign is a hilarious, laugh-out-loud mockery of American politics. It’s also a timely one that cleverly plays into the follies making headlines today. Director Jay Roach, who made the recent Sarah Palin TV-movie Game Change, never lets the farce take itself too seriously and instead gives Ferrell and Galifianakis free reign on the silly material. Ferrell and Galifianakis are quite funny together as the crude, juvenile overgrown children running the show. (Dylan McDermott is also quite funny as Marty’s suave campaign leader) The comedians show the political game as the schoolyard scuffle it really is. The Campaign doesn’t let either party off easy, with the freewheeling Democrat posting crotch-shots on Twitter while the Republican Marty is a shill for corporate bigwigs who want to insource Chinese workers and thus bring cheap foreign labour to America.

The more Cam and Marty get down in the dirt, the more they remember that politicians are supposed to stand for something. However, it seems that doing the right thing only invites more ridicule or smear tactics. The underlying message is not really the platform of The Campaign, or its selling point, but it provides many silly antics that are sure to win votes from audiences in search of a fun night at the movies. Easy vote getting: now that’s American!