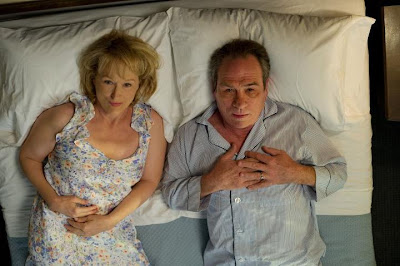 Many people retire by sixty, but not Meryl Streep. My favourite actress is truly in the midst of her golden years, and offering as strong and prolific an output as she did in the 1980s. Streep reteams with David Frankel, her Devil Wears Prada director, and gives another winning performance in Hope Springs. Nowhere near as lightweight as the trailer suggests it to be, Hope Springs is a smart and refreshing love story for grown-ups. Perhaps the story of Kay and Arnold Soames (played by the perfect onscreen couple of Streep and Tommy Lee Jones) is a glimpse at how life would have turned out for Margot and Lou had they stayed together in Take This Waltz. Much like the 2009 Streep vehicle It’s Complicated, Hope Springs looks at how one can rekindle ‘that old feeling’ when one is pushing retirement. Stronger and more insightful film than the fun Nancy Meyers’ comedy, this year’s Streep sex-romp is a surprisingly candid portrait of love and sexuality in the senior years.


Kay and Arnold Soames have entered that inevitable lull that comes when a couple has spent so much time together. Hope Springs introduces viewers to Mr. and Mrs. Soames on the eve of their 31st anniversary. Kay stands before the bathroom mirror as she tousles her hair and gets a feel for her new nightie. She looks hesitant, almost afraid. She then knocks on the door to her husband’s bedroom – separate bedroom, one should note – and he looks up. Arnold takes no notice of his wife. It’s no wonder that Kay is so shy when it comes to feeling sexy.

The next morning reveals the dullness of the couple’s routine. Kay makes her husband bacon and eggs every day. He says “good morning” and she replies with a pathetic little “hmmm”. It’s portrait of dull suburban living to be sure. 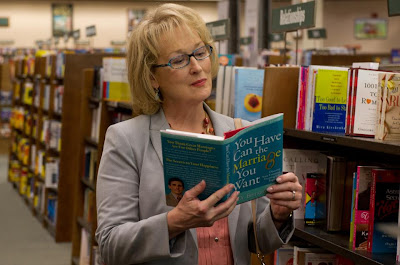 Kay wants more from life, but all Arnold wants to do is read the paper and fall asleep in front of the TV. To save her marriage from its platonic funk, Kay registers herself and Arnold for a week of couple’s therapy with renowned couple’s specialist Dr. Bernard Feld (played by a straight-laced and subdued Steve Carell). It comes as no surprise that Arnold thinks that therapy is a stupid idea and a waste of $4000. On the other hand, his reluctance to admit that his marriage has a problem validates Kay’s concern. Arnold reveals himself a teddy bear under his hard surface, though, and he and Kay soon find themselves in the quaint seaside town of Great Hope Springs. 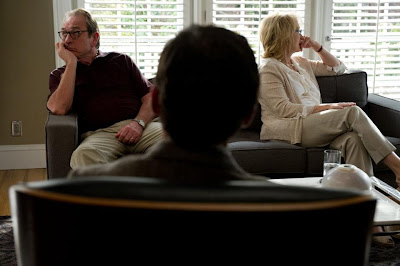 In the therapy, Dr. Feld explains that their sessions will be like healing a nose: you have to break it before it can be repaired. The sessions with Dr. Feld seem a little painful as Kay and Arnold hesitate to open up. One can see that shyness and a lack of communication have led them to their present predicament. However, Dr. Feld’s therapy prescribes exactly what Kay has missed from the marriage: intimacy, touching, and closeness. Once the therapy begins, Hope Springs blossoms into a surprising and smart tale of how hard couples need to work to keep the passion alive in a long-term commitment. 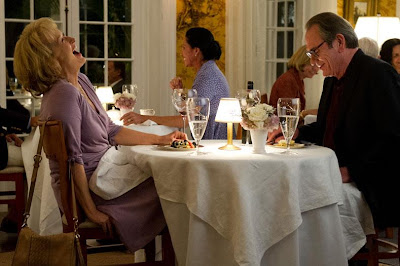 Hope Springs is a mature dramedy with an edge of sex farce. The laughs help take the edge off audiences so they can appreciate its helpful tonic. The film doesn’t play it safe, either, and pits Streep and Jones in some awkward situations that are sure to make mature audiences blush or shed some tears (from pain or laughter) as witnessed by the response from the seasoned audience at the theatre. Hope Springs might be rated PG-13 (or 14A here in Ontario), but it doesn’t shy away from putting its stars in scenes of a sexual nature. Meryl masturbates. Meryl goes down on Tommy Lee in a movie theatre. It’s all done tastefully and with a spot of fun, and these scenes from a marriage show what couples can do to keep the flame alive. The highlight of the film, however, occurs in a romantic candlelight dinner in which Kay and Arnold relive the memories that brought them together. It might be the only scene in the film where they sit down and have an actual conversation. Hope Springs shows that intimacy goes beyond the bedroom, and its approach to relationships is highly therapeutic. 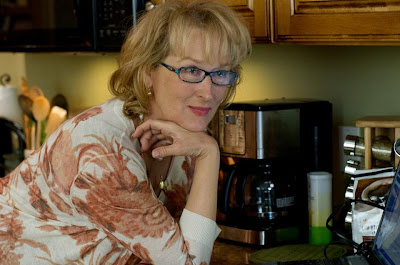 Kay’s efforts are not in vain, and Streep is a great seductress with the magic of Hope Springs. If one needs further proof of Meryl Streep’s versatility and range, one need not look any further than her recent double whammy. After her masterfully calculated (and deservedly Oscar-winning) turn as Margaret Thatcher in The Iron Lady, Streep gives one of her most natural, down to earth performances as the downtrodden Kay Soames. It’s odd to see Meryl look so withdrawn and dejected, and Kay is more of a Debbie Downer than the iron ladies that Streep usually plays. On the other hand, Kay’s wispy demeanour really lets Streep shine whenever something sparkles behind Kay’s eyes or sneaks through the cracks. Although Tommy Lee Jones’s Arnold appears more tough and crotchety, Kay is really the grumpy old man in the Soames’ marriage. 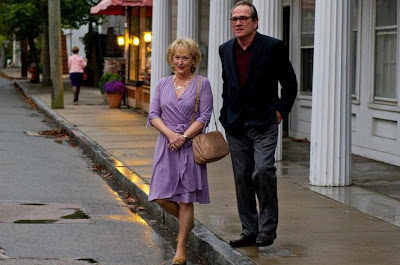 Jones is every bit Streep’s equal in Hope Springs. Like Streep, he gives a natural, low-key performance, but that Arnold keeps a lot bottled up inside and Jones is careful when to expand his character. Arnold is a true old-school man’s man. He doesn’t talk about anything and he hides he feelings, yet Jones shows the insecurity that hides behind Arnold’s weathered old face. The casting of Jones as the crusty old man is perfect: not only for his deadpan comedy, but also for the extra layer he brings to his character. Streep and Jones surely give two of the year’s best performances in Hope Springs.

Streep and Jones are magical as the troubled couple, but Hope Springs rejects a fairy-tale approach to marriage even if they live happily ever after. The film is a welcome alternative slice of summer moviegoing and gives mainstream audiences a rare shot of intelligent comedy. Hope Springs is a winner.