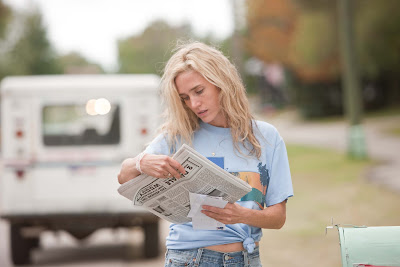 What’s wrong with Virginia? I’m tempted to say “everything.” Virginia, the schizophrenic directorial effort by Dustin Lance Black (screenwriter of Milk) is a shrill, gaudy, mess of a movie that doesn’t know what to do with some potentially strong material.

Jennifer Connelly gives a brave performance in the title role Virginia, a white trash woman who lives in the heart of Mormon country with her bastard son and a case of schizophrenia. Connelly seems capable of taking the viewer to new depths with her portrayal of her character’s condition, but it seems like Virginia belongs in a different movie. There is the potential for a dark satire on the hypocrisy of the religious right, as Virginia’s madness is precipitated by complications in her twenty-year affair with the town sheriff (Ed Harris), who breaks things off when he decides to run for higher office. 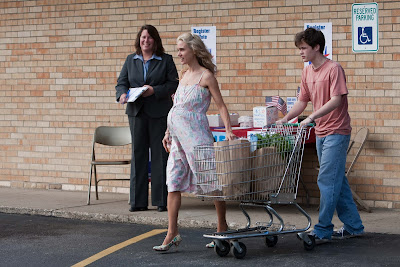 Virginia starts to think that she is pregnant with his baby – there are rumours that her first son, Emmett (Harrison Gilbertson), may also be Sheriff Tipton’s baby – so she makes herself a baby bump out of some dirty laundry and spreads word about her baby daddy around town. She also quits her job, dons a gorilla mask, and tries to rob a bank. All sorts of crazy stuff happens in Virginia (there’s even some S&M with the Mormons), but it’s hard to digest all the madcap foolishness that Black creates.

Is this film a drama or a comedy? Is Virginia the butt of the joke or the one laughing? Too often does it seem as if Virginia’s mental illness is played for laughs, and any attempt to understand her condition feels forced.

The bipolar tone of the movie isn’t helped by its awkward pace and a handful of strange performances, although Amy Madigan offers a good supporting as Tipton’s straight-laced wife. Virginia also shifts from bright lights and flashy colours to ugly, dimly lit compositions. The odd look and tenor don’t help much in deciphering the wackiness of the story.

There is probably a good movie lying somewhere under the surface of Virginia, but it’s hard to find it amidst the disorder on screen. Black certainly shows ambition in realizing the words of his scripts and his attempt to give time to marginal characters is certainly appreciable. Virginia might just get back on her meds before things start to make sense.


Virginia plays in Ottawa at The Mayfair (Bank) on Saturday, Monday, Wednesday, and Thursday of this week. It then heads to home video on August 21.