The Mouse Ran Up the Clock 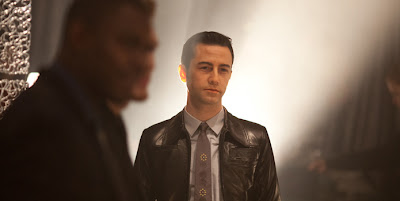 “I don’t want to talk about time travel,” says Joe (Bruce Willis) to his younger self (Joseph Gordon-Levitt) during a pivotal scene of Rian Johnson’s Looper. Looper, which opens in theatres Friday after kicking-off the Toronto International Film Festival earlier this month, is a smart, talky action flick that often expresses its dislike for talking. The characters say a lot in Looper, but their words frequently serve to note which people/subjects they would rather not talk with/about. Smart and self-aware, Looper is an action-pic for the thinking-crowd. It’s bound to enjoy strong fanboydom and crossover appeal, so one can see why the folks at TIFF found it so attractive.

Don’t let the casting of Bruce Willis fool you. Looper is a surprisingly highbrow actioner. It is by no means cerebral or inaccessible, though, for the Joes square off in a complicated game of cat-and-mouse time travel that lays itself out quite well in the opening act. Looper feels very much the product of the action genre post-Inception: it is a high concept thriller with some refreshingly original ideas. 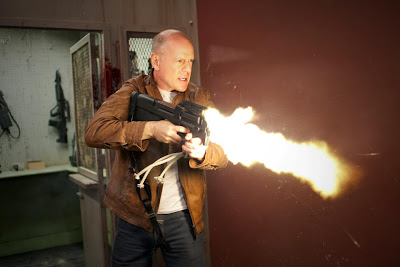 Joe – the younger incarnation – is what they call a “Looper.” A Looper is a hit man who cleans the streets of the future. Set in the 2040s, Looper tells of a world in which time travel both has and has not been invented. There is no time travel in the world of Joseph Gordon-Levitt’s character, but there is in the 2070s when his elder self is played by Bruce Willis. Loopers, then, serve as hit men and clean-up crew for futuristic hits. The execution is simple: zap a person back in time three decades, bump them off, and then dispose of the body. It’s the perfect crime because, technically, no crime was ever committed in the present since the missing party was dead long before. It sounds more complicated than it is, but one presume that the most popular legal term sixty years from now could be habeas corpus.

The problem with these clock-bending whacks, however, is the loopers themselves, for they carry their knowledge of the crime in the future years that provide the victims. As Joe sees one colleague after another perform a hit on themself – it’s a form of suicide, really – he sees the convoluted path that lies ahead. Then one night Joe’s best friend, Seth (Paul Dano), appears at his apartment and says that he failed to close his own loop. Simply put, Seth was supposed to kill his future self, but he could not fulfill the task.

Joe is faced with the same assignment a few days later. Waiting at the edge of a cornfield and checking his watch for the hands to signal the hit to appear from thin air, Joe is mildly surprised when a weathered version of himself appears on bended knees. Like Seth, Joe chooses not to close the loop. Consequently, Joe’s present-day mob boss (Jeff Daniels) sends hired goons to close both ends on the loop of Joe.

The gimmick of time-travel almost becomes an ancillary afterthought once the old Joe appears. Looper offers numerous temporal shifts within its fast-paced first act, but then the film slows down and becomes a more methodical thriller as it moves along. Likewise, one expects the encounter between the two Joes to elicit a little more soul-searching: presumably, if one could go back in time, one would offer all sorts of advice to the younger self, and the younger self would have an endless string of questions for the elder. However, Joe isn’t much for talking (the Bruce Willis Joe, that is) and he cuts off this element of the film with his aforementioned zinger.

Looper instead uses the futuristic mind-bender element to revitalize the cat-and-mouse genre. Cat and mouse are strangely opposed in this film, since the attempt to stop the other is an attempt to stop the self. Old Joe’s rampage of revenge cannot aim its bullets at the younger Joe, for if the mouse dies, so does the cat. Young Joe, on the other hand, can use the past to lead the cat wherever he pleases; he also knows that the cat will bat him around, but never go in for the kill. (Instead of cat-and-mouse, Looper might more be a case of the tail wagging the dog.) 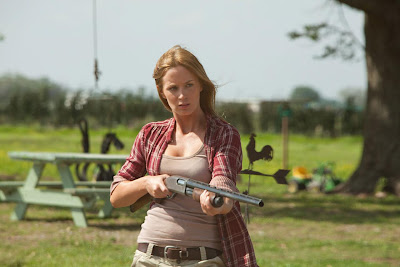 Anchored by two strong performances by Gordon-Levitt and Willis, Looper is solid, smart entertainment. Emily Blunt also gives a good turn as Sara, a woman whose quiet farm marks an important turning point in Joe’s life (plural). Blunt sports a convincing Yankee accent and she wields a shotgun as fiercely as Bruce Willis does. Willis actually gives much of the star power to his younger co-star Joseph Gordon-Levitt, who holds his own as an action star quite well, especially in this puzzler that carries the art-house credibility of Johnson’s stylish flair.

It is a bit distracting to see Gordon-Levitt’s face morphed into the likeness of Willis thanks to some handy CGI. The effects are certainly notable since the transformation looks seamless. Audience members less familiar with the younger actor will fail to notice, but his fans might be put off at first; however, they will surely forget it quickly once the thrill of the film consumes them. More distracting among the visuals, however, is the comical amount of lens flare that Johnson unleashes throughout the film. Virtually every source light in Looper emits a little blue line that cuts across the frame. It's a silly gimmick and its use is far more incomprehensible than the convoluted plot. Looper looks like J.J. Abrams run amok.

Unnecessary wattage aside (take note whilst watching the trailer below), Looper is a slickly constructed film. Smartly paced by editor Bob Ducsay and crafted with an inspired narrative flow and a disarming temporal structure, Looper is a wholly unconventional action film. It’s arguably the smartest action movie since Inception. It’s one of the more entertaining ones, too.