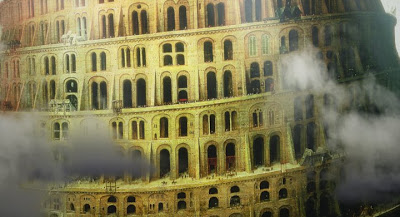 Where does one start with Babeldom? Let us begin with the walkouts. Saturday night’s Gala screening at the Ottawa International Animation Festival saw a mass exodus of patrons fleeing for the doors. I have never seen so many cinephiles exit the theatre. Smart folks they were. For those of us who stayed and survived, however, we certainly played witness to the greatest turkey on the festival circuit this year. (Breathe a sigh of relief, Passion.)

Babeldom is a high-faulting’ essay film about a city yet to come in which the past and the future are united in the present. This seems like a faulty gap in logic. I.e. “city of the future” + past + future = present? The preposterous equation of Babeldom’s foundation gives way to a pretentious premise of jibber-jabber and academic inanity that debates mankind’s inability to unite through language, save for mathematics, which the film describes as a wholly unnatural language. The point thus remains unclear.

The film continues with an endless stream of circular voiceovers matched to meandering visuals of sewers, streets, escalators, and animated algorithms. The film contains little animation for a feature film screening at an animation festival, and the non-live action scenes are easily the least attractive pieces of the whole. The animated aspects of Babeldom look as if they were made on a computer program from the 1980s, with the clunky, jerky figures accentuating the ham-fisted philosophy of the narration. The only animated sequence that has any life to it is a strange montage of cartoon strippers who twirl around and spin their breasts. Babeldom is the Piranha 3DD of essay films.

With its rambling musings and mish-mash of visuals, Babeldom says a lot without actually saying anything. This is arguably the most artless, self-indulgent, and plodding piece of pseudo-intellectual bullshit I have ever seen. This fraudulent film might appeal to self-consciously highbrow cinephiles who love to chat semiotics over scotch on a Saturday night, but Babeldom is simply so empty and tortuous that one cannot be bothered to debate it.

The latter observation is the film’s greatest disappointment, for while essay films can often be among the most difficult film experiences, they can also be among the most rewarding. Films like Sans Soleil or, more recently, The Prophet excite the mind and the senses with their melding of form and thought. It’s what comes after such a film that should yield its greatest reward. The journey is not worth the struggle, however, since Babeldom only conjures a feeling of time misspent.