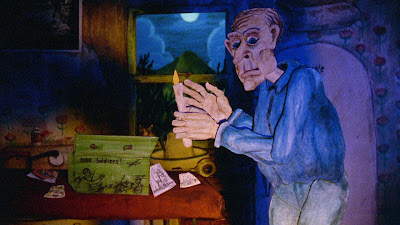 Consuming Spirits shows how a quick drink is often more rewarding than an all-night rager. Some things don't hold their own in the long run, yet a quick shot avoids the nasty overkill of a hangover. A sprawling odyssey in scope and vision, Consuming Spirits could be a great film if director Chris Sullivan tightened it by half. The film plays like a masterpiece for its first hour or so, but then gradually overstays its welcome like that party guest who lingers long through the night.

The core of the narrative tells of three sad sacks living in the rust belt town of Magguson. All three parties work at the town’s local newspaper in some capacity and their interactions are cold and distant. Their relationship seems tangential at first. Earl Gray is an elderly man whose nightly ramblings about gardening on the local radio show often serve as the soundtrack to which the others drive home drunk. The main drunkard is Victor Blue, who spends his days pasting together stock photos and sensational headlines in the newspaper and his nights driving sideways through the streets of Magguson. Finally, there is Gentian Violet, a middle-aged spinster who drives a school bus (for no apparent reason) and takes care of her ailing mother, who mows down a nun one night while driving home and listening to the radio show. The run-in with the heavenly sister makes this film seem like it’s about to embark on a massive moral journey à la Kenneth Lonergan’s Margaret. Consuming Spirits does mirror Lisa Cohen’s struggle with moral culpability to some extent, if one can simply piece it all together.

Consuming Spirits displays an irrefutable gift for artistic vision. Told in a variety of animation techniques, such as paper cut outs, models, tracing paper, and cell animation, the film cleverly uses form to display shifts in temporality and consciousness. On the other hand, the film plays like three or four creative exercises strung together into one feature length film. The primary narrative primarily uses the technique of paper cut outs, and the visually stunning story of Earl, Gentian, and Victor might have worked best had it restricted itself to the one form. (The paper scenes could easily yield a strong film of one-hundred-odd minutes.)

Likewise, the transitional sequences use small-scale models and the flashbacks appear as pencil-on-paper: they all look spectacular and give one’s mind a workout, but the excessive of stuff in the film eventually works against it. Moreover, all the threads of Consuming Spirits might work beautifully as stand-alone pieces, but they don’t really come together. There is simply too much going on in the film both in terms of its narrative and of its visuals. Neither aspect seems to gel, either, until one character gives a lengthy speech towards the end of the film. Even then, though, the film’s unnecessarily long running time of 135 minutes will likely leave viewers too exhausted to appreciate the payoff. (Another parallel to Margaret?)

The pic does have a dense thematic richness, which is accentuated by the recurrently use of melancholy ballads that arise during many a booze-fueled night at the Irish pub. Conversely, some of the craft is a bit uneven, such as inconsistent colour warmth/saturation and distractingly poor sound quality. Overall, though, there is no denying the attention to detail and the painstaking skill on display in Consuming Spirits, but even one’s admiration for the animation wanes during the films exhausting running time.