Day one of the TIFF 2012 began with a live reading of American Beauty directed by Jason Reitman. Reitman has done a few of these live reads now, but it was his first time doing one at TIFF. It’s an exciting way to revisit and experience a classic film.

The process strips the film down to its core by taking only the screenplay, in this case the Oscar-winning script by Alan Ball, and recasts the roles with fresh faces. The event might best go down as the greatest advertisement for Breaking Bad ever made by giving Bryan Cranston the role of Lester Burnham, which Kevin Spacey won Oscar for when he originated the role onscreen. Joining Cranston and Reitman in the read were Christina Hendricks (terrific!), Sarah Gadon, Paul Scheer, Adam Driver, Nick Kroll, Mae Whitman and George Stroumboulopoulos. 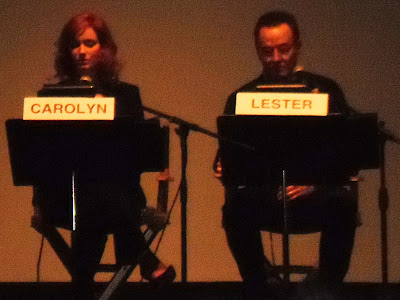 A few still frames were projected on screen throughout the reading so that the audience could have a sense of place within the film. It was really funny to see how many people in the audience whipped out their cameras when the iconic image of the plastic bag appeared. While watching the event, though, it was neat to see the actors gain a rapport throughout the reading (especially Cranston and Hendricks) and the read offered an interesting way to experience an early part of the creative process that goes into making a film. I also really liked being able to hear Ball’s stage directions in the screenplay, which were read by Reitman and offered a bit of insight into how the actors might gain cues for their performances.

I really enjoyed this event. American Beauty was a good choice for a first read at TIFF since the film helped mark TIFF as a launch pad for the Oscars since American Beauty won the People’s Choice Award and then went on to win Best Picture. I hope that future editions of the festival include live readings of future TIFF winners!