TIFF Review: All That You Possess 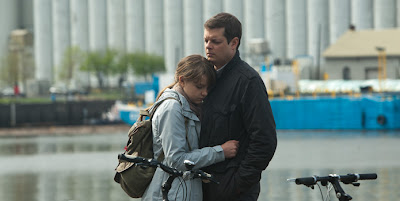 It takes a true master to the simple banalities of life and turns them into moving works of art. It's fitting, then, that French Canadian director Bernard Émond's latest film All That You Possess (Tout ce que tu possèdes) had its world premiere in the Masters programme at this year’s Toronto International Film Festival. Émond was last at the festival in 2009 with La donation, which earned a special citation from the jury for Best Canadian feature. With All That You Possess, Émond offers another rich yet understated slice of life.

All That You Possess is a delayed coming of age story for Pierre Leduc, played by Patrick Drolet. Pierre is admittedly a bad man when the film begins. He is neither violent, uncouth, nor unlawful. He is well liked, too, so his misery is only apparent to the close relations that he has alienated over the years. Pierre is simply bitter and selfish. The world doesn't seem to exist beyond his own solitude.

As proof of Pierre's solipsistic existence, he works as a professor at the local university. Pierre is a member of the Polish department and his current project is the translation of an obscure poet named Edward Stachura. A French Canadian collection of rarely-read Polish poetry serves little more than to pique Pierre's own interest. Enrapt in his studies, Pierre's world exists within the borders of the stuffed bookcases that surround his room.

As Pierre translates the work, he discovers a bit of himself in the pottery. Correcting and changing words as he goes along, Pierre learns does some soul searching through the poet’s words. This slow metamorphosis occurs through the strong Christian overtones of the poetry, which have ample resonance with Quebecois culture given the province's history with the church. Anyone who has attended a service since the 'new mass' took over will surely notice the emphasis on sin and repentance that Pierre fixates upon during his translations. As he repeats the line “Through my fault, through my own fault,” he reflects upon the sins if his past.

As the church says, it's never too late to repent. Pierre therefore slowly goes through a ritualistic cleansing. He purges himself of his self-serving profession and he rids himself of all his possessions by making one trip after another to the used bookstore.

All That You Possess is a quiet, subtle film about atonement and expiation. The film is handsomely indebted to qualities of the human condition. Its themes are borrowed from the lessons of the church, so some viewers of other denominations might have trouble noticing all of Émond's rich symbolism. (The film benefits from the addition of a Q&A.) However, the recurrent use of the poetry offers an alternative route into the revolution of three films flawed ant-hero. In spite of the film’s modest conservatism, All That You Possess resonates through its minimalist approach to realism, and its universal message about slowing down and getting back to basics in today’s fast-paced, wired-in, and highly materialist society.


All That You Possess opens in Quebec on Nov. 2.