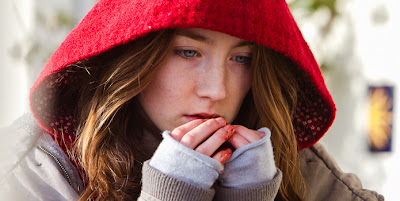 Byzantium could have been the next great horror flick. Now that the Twilight saga is finally wrapping up, something needs to succeed Edward and Bella and sate the blood lust of vampire fans. Byzantium is more like the anti-Twilight, though, for there’s little emo pining going on here. Instead, it’s a blood soaked fracas of gothic horror. It's not much of a love story, either, but rather a mother/daughter tale of a curse that runs in the family.

The creatures in Byzantium are a pair of soucouyants, two night creatures played by Gemma Arterton and Saoirse Ronan. These two phantoms drift around Ireland in search of blood and shelter. Unlike vampires, they can prowl during daylight and they don't suck blood through fangs. Instead, these creatures have a retractable claw, which emerges when they punch a jugular as if it were the pull-tab on a can of ale.

Directed by Neil Jordan, who makes for a good fit with the material given his canonical work on Interview with the Vampire, Byzantium displays a masterful sense of atmosphere. It's dark as night and as hypnotic as a full moon thanks to its blend of mysticism and folklore. The arts and tech credits are superb in delivering the gothic feel, especially the costumes, production design, and score by Consolata Boyle, Simon Elliott, and Javier Navarette, respectfully. Horror fans will love the femme-centric spookiness of the film, not to mention the blood-soaked celebration of violence that follows the girls’ trail. Byzantium is drenched in red corn syrup, as all good horror films should be. Additionally, thanks to the strong performances by Arterton and Ronan, the female dynamic of the night feeders gives the genre something new. Especially with Arterton's lady of the night does Byzantium make an orgiastic feast with the combining of sex and violence that one frequently sees in the genre.

Unfortunately, though, Byzantium takes for granted that few people live forever, and it's a shame that the script by Moira Buffini (adapting her own play) takes an eternity to get the blood pumping through this flick. If Byzantium lost a good twenty minutes from its slow start (or one of its unnecessary subplots), it might hit viewers like a stake through the heart. Unlike Twilight, though, this vampire movie doesn’t suck.

UPDATE: Byzantium opens in Toronto July 12 at Cineplex Yonge and Dundas. It opens in Ottawa August 9 at The ByTowne.