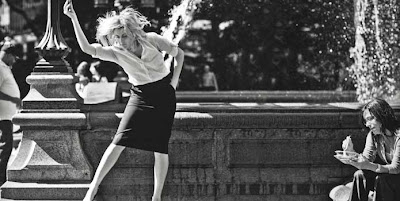 Ahoy, sexy! Greta Gerwigians shall rejoice over the delightful little ditty of Frances Ha. The loveable starlet is in full ‘adorable scatterbrain’ mode in Frances Ha. A quirky joie de vivre tale told in glorious black and white, Frances is a charmer. I had a smile on my face from beginning to end during Frances Ha. Anyone who does not love this film is surely made of stone.


Frances is a happy-go-lucky twentysomething trying to make the most of life in New York. A starving artist, Frances embodies a generation of youth endowed with useless arts degrees and false promises of a life of opportunity. All of Frances’s other friends have settled for shitty office jobs, but Frances still works as an alternate dancer and teaches the odd lesson from time to time. She doesn’t seem to mind being a little aimless in her work, since she feels so grounded in her home life.

Frances shares a Brooklyn apartment with her best friend Sophie (Mickey Sumner). Friends since college, Frances and Sophie are practically the same person. They’re platonic lovers or, as one of them says, “a lesbian couple that doesn’t have sex anymore.” These two women in love are such loyal friends that Frances even breaks up with her boyfriend when she declines his offer to move in together. She simply can’t bear the thought of betraying Sophie.

Fortune smiles at some and laughs at others, though, and Frances gets a resounding “Ha!” from life when Sophie double-crosses her and moves into an apartment with her d-bag boyfriend Patch (Patrick Heusinger). Getting dumped gives Frances a wake-up call to the realities of life, for one cannot survive in New York for long on an artist’s salary. (If you can even call it that.)

Frances jumps at life with a fumbly jêtée, and tries to become an adult on her own. She won’t grow up and the unemployable, undateable Frances just seems to be one of many adults trapped in Neverland forever, or perhaps the Island of Misfit Toys. Thankfully, though, this spunky rag doll dances around in a vibrant cityscape. Baumbach’s black-and-white Brooklyn feels like this generation’s answer to Woody Allen’s Manhattan, thanks to its hustle-bustle energy and its roster of wannabes who talk about art and philosophy but have little to no experience with the real world.

As Frances goes out and explores, she learns that the world isn’t such a scary place. She just needs to find the right people who accept her word vomit and colourful eccentricities. Frances might be the most awkward character to grace the screen in some time, but she’s smart, spunky, and full of ambition. A bit like Muriel Hemingway’s Tracey in Manhattan, Frances simply lacks direction and needs a trip to Paris to set herself straight. (Even when Frances goes to the city of lights, though, she suffers a major brain-fart of irresponsibility.)

For all her lack of direction, though, Frances runs around New York with a smile on her face and a beat in her step. Frances Ha easily marks the most optimistic film to date from director Noah Baumbach (The Squid and the Whale, Margo at the Wedding). The feel good nature of the film is almost wholly attributable to Gerwig's golden performance. She is simply irresistible as Frances, and the character is one with whom all young members of the audience will connect. Frances Ha seems to be tailor-made for a generation of younger viewers who, like Frances, were reared in a society that emphasizes knowledge-based learning, but then shuts the door when it comes time to create jobs for artistically-minded individuals. As someone who will likely never own a house, never earn a pension, and forever be riddled with debt, Frances always manages to find the bright side of life even if she needs a phony smile to convince herself that life is good.

Baumbach’s film might have a more youthful feel than his others might, as Gerwig wrote the screenplay in collaboration with the director. She succeeds as well as a screenwriter as she does an actress. In spite of all the quirk and whimsy of Frances Ha, there isn't a false moment to the film. It might be Gerwig's comfort with Baumbach, or her own closeness to the character that makes this grayscale coming-of-age story so accessible. Greta Gerwig makes me happy about life. Now Frances Ha does, too.


Frances Ha opens in limited release May 17.
We'll keep you updated as it hits theatres in Canada.