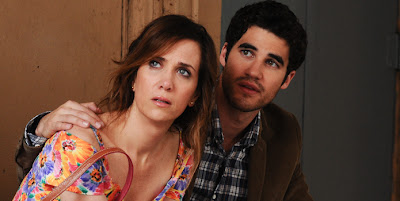 “There’s no place like home, there’s no place like home,” says Dorothy in The Wizard of Oz. A high school stage production of the classic film opens Imogene, with the title character playing the role of Dorothy. Even as a schoolgirl, Imogene’s mind has been finely attuned to the stage. “This is stupid!” she continues, “Why would anyone want to leave Oz?” At the behest of her crotchety teacher, Imogene clacks her heels three times and gets back to reality. As noted by the sardonic tempo of her clacking (she’s no keener to return to Kansas), Imogene also seems to have adopted a perceptive cynicism to life, which combines with her dramatic skills and produces disastrous results when she grows up. Funny, awkward, and hopelessly lost, Imogene is much like Frances from Frances Ha if Frances woke up with a bad case of the Mondays.


Cut to twenty years later and Imogene is a thirty-year-old fuck up played by Kristen Wiig (Bridesmaids). A failed playwright, Imogene is the laughingstock of her groups of frenemies. (They’re the kind of cackling socialites who would be gossiping behind fans in Anna Karenina.) Bad luck comes in threes for Imogene and she loses her job, her apartment, and her boyfriend in just a few days. Prior to losing her apartment, though, Imogene makes a stab at winning back her lover by staging a suicide attempt. (She still has a flair for drama.) Imogene mucks this performance up, too, as she gets bored while waiting for him to arrive and pops one pill too many while passing the time. It turns out that Imogene wrote a very convincing suicide note, though, so her attempt to end her life comes off as some tragic effort to escape a crappy existence. As an ironic twist, Imogene’s only successful production is all a mistake.

The doctor at the hospital is so compelled by Imogene’s letter that he refuses to release her on her own recognizance. He uses the only family contact information available and tracks down Imogene’s mother, Zelda (Annette Bening), with whom she has been estranged for years. Imogene explains to the doctor that her father died when she was a teenager and that she and her brother were left to fend for themselves because Zelda is a gambling addict who neglected her kids so that she could spend more time at the slots. The doctor simply thinks this excuse is another reason why Imogene tried to off herself, so he ships her off to Zelda’s for three days of rest.

Once mother and daughter are reluctantly reunited, Imogene explodes into a zany dysfunctional family comedy. As played by Annette Bening, who gives an outstanding performance in this spicy role, Zelda is a brash, uncouth floozy. It’s easy to see why Imogene’s life is such a train wreck. Zelda’s house isn’t the most shipshape place, either, as she lives with her adult son, Ralph (Christopher Fitzgerald), who has a strange obsession with hermit crabs. He’s a hermit crab himself, as he hides in his room and is afraid to break free of his shell. Ralph is so obsessed with crustaceans that he owns a shop on the boardwalk and gives crabs to all the pretty ladies. In the meantime, Ralph builds himself a bulletproof crab shell so he can one day set forth into the world. (The shell even has the modern convenience of Wi-Fi.) Also rooming in Zelda’s house is her boyfriend Frank (Matt Dillon), a paranoid CIA agent who likes to eat turkey sandwiches during the day and spank Zelda’s butt at night. Living in Imogene’s room, finally, is a young boarder named Lee (Darren Criss). We know where this is going.

The trip to Imogene’s recovery begins when Zelda lets slip a big revelation. Imogene’s story of pulling herself together might be familiar, but how she gets there is what makes the film shine. This is a wacky, madcap comedy full of silly situations and clever dialogue. Imogene has eccentric and colourful characters, but they’re all well rounded and dynamic. (Uproariously so.) From the title character down to her bitchy friend Dara (a hilarious June Diane Raphael), all the faces in Imogene have an extra bit of life to them. The ensemble fills the juicy roles well, with star Kristen Wiig giving an upgraded performance from her winning work in Bridesmaids. Wiig is just as funny as she was in last year’s anti-chick-flick and she adds some dramatic chops to her awkward girl shtick. Everyone in the supporting cast is lots of fun, but Annette Bening easily steals the show as the colourful piece of white trash from New Jersey. Glee fans will also enjoy Criss’s spirited turn as Lee, and Criss is a good sport for performing a campy Backstreet Boys number when Lee takes Imogene to a night of Nineties cover songs. That’s when Imogene discovers that the cure for life is Long Island Iced Tea. “The cause of – and solution to – all life’s problems,” as Homer Simpson says.

Directed by Robert Pulcini and Shari Springer Bergman, and written by a sharp wordsmith named Michelle Morgan, Imogene is a hilarious story of how arrested development runs in the blood of every good American family. Thanks primarily to the go-for-broke efforts of the cast – namely Wiig and Bening – Imogene might be the funniest film I’ve seen all year. I haven't laughed as hard or as loud since Bridesmaids. The audience at Saturday's screening at the Toronto International Film Festival seemed to agree, as the audience consistently erupted in unison into loud bursts of laughter throughout the film. Imogene is the kind of film that anyone can relate to, as we all have family foibles that we’d like to hide, but we could never bear to since their an essential part of ourselves. It’s these wacky family get-togethers that make for the strongest memories, and Imogene shows that we’re not in Kansas no matter how drab or dreary life may seem.