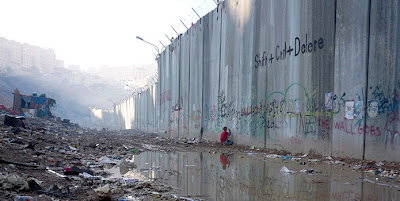 Inch'Allah comes on a wave of films about Canada's relationship to the Middle East. For example, Ruba Nadda’s Inescapable, which also plays at the TIFF 2012, jets Alexander Siddig and Marisa Tomei to Damascus for a politically-tinged thriller. The trend began with Incendies and its mythical tale about the devastating ravages of the civil war in Lebanon. The film proved a bone fide hit. Then came Monsieur Lazhar and its sweet tale about Middle Easterners becoming part of the Canadian cultural mosaic. There was also Afghan Luke, the inevitable CanCon turkey, but we'll just slip that one under the covers. If we can't see it, the problem doesn't exist, right?

The same rationalization becomes the central dilemma in Inch'Allah, the latest Canadian film embroiled in the drama of the Middle East. Inch'Allah, directed by Anaïs Barbeau-Lavalette, is a powerful film. Comparisons to Incendies are inevitable, and audiences will be glad to hear that Inch’Allah holds its own against Denis Villenueve’s masterpiece. (Barbeau-Lavalette actually worked on Incendies and directed a behind the scenes documentary that appears on the Blu-ray edition of the film.) Like Incendies, Inch’Allah is an emotionally draining and devastating experience; however, as with Canada’s 2010 Oscar nominee, this tragedy has ample rewards.

Inch'Allah tells of the consequences of the civil war between Israel and Palestine. A Canadian doctor named Chloé (Evelyne Brochu from Café de flore) find herself caught on both sides of the concrete wall that separates the two territories, both literally and figuratively. Chloé is hired to work in a clinic in Palestine and she lands the side job of being the personal nurse to a pregnant young Palestinian woman named Rand (Sabrina Ouazani). As Chloé tends to the wounds of Palestinians, she sees firsthand the violence and destruction that ravages the land through war.

Chloé's experience in Palestine also teaches her that Israel is a much safer place; consequently, she keeps an apartment in Jerusalem and makes a daily trip across the border for work. Chloé can pass far more easily than others can. In Israel, Chloé befriends a young woman named Avi (Sivan Levy) who works in the Israeli army. Chloé’s friendship with Avi provides private evidence of how deeply and personally this war cuts. Avi never states her reasons for duty whenever Chloé enquires. The only excuse, from Chloé’s perspective, is that it's hereditary.

Chloé’s friendship with a girl in either warring faction leaves her straddling both sides of a complex situation. As much as Chloé tries to remain neutral and apolitical, she cannot help but be persuaded to fight with one side. One rowdy hooligan teases Chloé that “All sides is no sides.” The comment is delivered with the implication of promiscuity, and Chloé cannot help but feel cheap and dirty while watching bloodshed from the sidelines.

Anaïs Barbeau-Lavalette handles the complexity of the Israel/Palestine setting with considerable care and skill. Dialogue about the specificities of the divide is scant, aside from the odd comment that this rift has strong roots rooted in religion and history. Rather than simplify such a complicated story within dialogue that makes for an engaging film, Barbeau-Lavalette doesn’t get mired in explaining too many details of the situation. The writer/director is smart to leave politics aside for much of the film, and she instead focuses on framing the bloodshed through a humanist perspective. Inch’Allah looks at the emotional and psychological tolls that war has on the individual. The film certainly doesn’t ignore politics; rather, it conveys them more subtly through symbolism and mise-en-scene. Inch’Allah will doubtlessly prove provocative and controversial, but it’s important to remember that the film is framed through the eyes of a foreigner who seems unable to scrounge up the facts from parties fighting on either side. Moreover, any explanations fail to justify the killing that Chloé sees.
Newer Post Older Post Home
View mobile version